The proliferation of music uses has made music royalty rights an attractive investment option.

Entrepreneurs are starting companies to gather and monetize rights.

Music royalties are a complex business, buyers need to conduct proper and exhaustive due diligence.

As the transition from physical to digital music has progressed, investors have realized that royalties are a valuable asset. In the last few years, both private equity firms and entrepreneurs have made investment plays in acquiring and developing royalty rights.

After dropping to a low in 2015, worldwide revenue from recorded music shot back up, growing from $14.7 billion that year to nearly $26 billion in 2021, according to the International Federation of the Phonographic Industry. Meanwhile, revenue by type of media shifted dramatically. In 2015, digital streaming represented only $2.8 billion of the total $14.7 billion in revenue. By 2021, it made up 65%—$16.9 billion—of total revenue.

Digital streaming has increased not only through digital music services, but also through audio on internet sites and social media apps, and even gaming sites, according to Carolyn Barr, senior director, and Julie Kelly, director, at RSM, both of whom specialize in transaction advisory services for the media and entertainment industry. The proliferation of music uses has made music royalty rights an attractive investment option.

“There are more and more avenues for people to consume music, separately from more mainstream streaming services, and this is providing more and more opportunities to exploit those rights,” says Kelly.

Individual artists and various types of companies are capitalizing on those opportunities. Some are more vigorously fighting to keep and monetize royalties, as Taylor Swift did with her highly publicized struggle to get her catalog back from her original record label. However, there has also been a string of well-known artists who have sold their catalogs over the last several years. 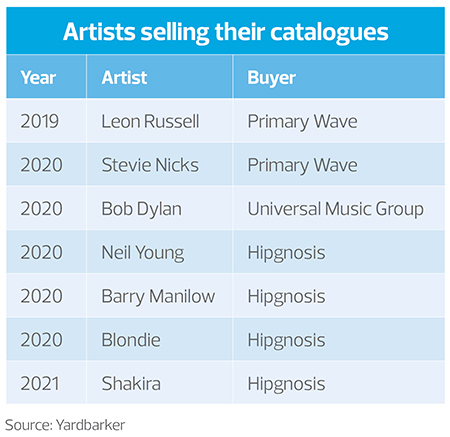 A ton of dry powder

Entrepreneurs are starting companies to gather and monetize rights. Merck Mercuriadis, a music industry executive and former manager of Elton John, Beyonce and Guns N’ Roses, founded Hipgnosis Songs Fund to invest in music intellectual property. It went public in 2018 on the London Stock Exchange, raising more than 1.25 billion pounds from its initial public offering as well as subsequent issues.

These companies invest in the rights and can subsequently either earn royalties for the songs already being played in various avenues or develop the songs further and promote the music in a new way. Additionally, given the many ways a user can consume music, acquirers may also identify unlicensed uses of songs as an avenue to pursue additional payment.

Private equity firms are getting in on the action. “There is a ton of dry powder, and private equity is looking for alternative assets in which to invest,” says Barr. Firms can build portfolios of catalogs that together produce reliable, consistent cash flows. 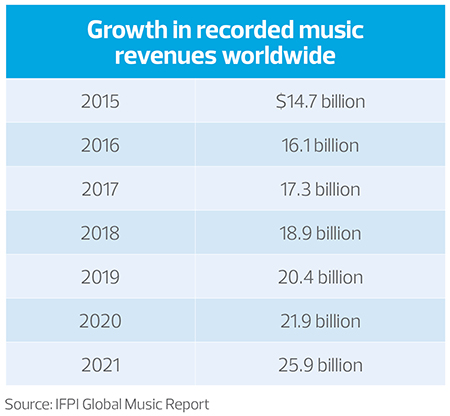 According to S&P Global Market Intelligence, private equity and venture capital firms invested about $1.51 billion in digital music rights from January through mid-October 2021.

The importance of due diligence

Even as investment booms in these assets, music royalties are a complex business, and buyers need to be careful to conduct proper and exhaustive due diligence.

“There are so many different revenue streams, coming from different media and different geographies, that it can be a challenge to understand the level of recurring earnings,” says Barr. In addition, there are no standard contracts; one can be very different from another.

Midsize and smaller sellers may not have the kind of sophisticated systems needed to accurately track all the information. “You need to figure out what’s been tracked and how,” explains Kelly. “Investors will need to understand the availability of information and what current systems are in place versus what investments need to be made to be able to locate and measure usage and develop metrics moving forward. All of those efforts will assist them down the road when they exit.”

Swipe to view all