For technology, media and telecom

Geopolitical uncertainty and other market challenges have led to fewer technology companies going public this year.

The two-year window is approaching to complete many SPAC deals.

After an incredible 2021 for venture capital-backed exits in the public markets, the number of initial public offerings dropped in the first two quarters of 2022, and valuations on many of the more sizable 2021 exits have waned.

Geopolitical risk, rising interest rates, high inflation and sliding valuations have created a cocktail of uncertainty in the first half of 2022 for companies considering going public—especially those in the tech sector.

Fewer private companies sought to go public via IPO in the first two quarters of 2022 compared to the same time last year, and we expect this is in part related to the war in Ukraine and other uncertainties in the market. In the technology sector specifically, with valuation pullbacks, rising interest increases and stock market instability, many companies are pausing their IPO plans. That said, there was roughly $225 billion of VC dry powder in the United States at the end of 2021 (an increase from $184 billion from the year prior) according to Pitchbook data, indicating other avenues may be available for companies that want to stay private longer and raise capital outside of the public markets. The slowdown in new listings is not necessarily negative, given this amount of dry powder; some companies may simply be shifting their timeline to eventually go public. 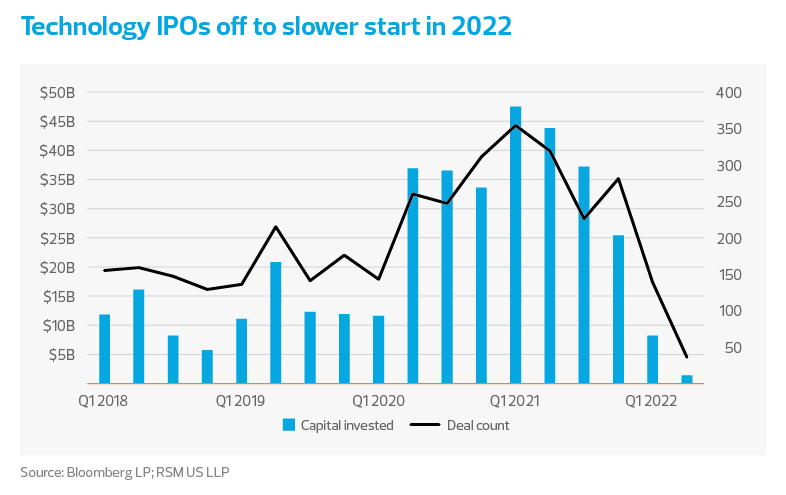 Some companies may be wary to debut this year given the performance of some of the most significant software IPOs last year. For example, as of June 1, 2022, each of the top-five companies with the largest software IPOs in 2021 have seen their stock performance slide since their initial IPO:

It will be important to keep an eye on some of the special purpose acquisition companies that formed in 2020, given that SPACs have a two-year window to identify their target company after their initial registration. And because 2020 and 2021 were such active years for SPACs—which are essentially shell corporations that list on a stock exchange specifically to acquire a private company, thus taking that company public without going the traditional IPO route—several SPACs will need to complete their deals this year or liquidate and return funds to investors.

Given the uncertainty in the market, we expect IPOs and SPACs to continue to slow and companies with current plans underway or public aspirations will continue to wait until the end of this year or, more likely, next year.

As the technology sector continues to be one of the strongest segments of the economy, we anticipate that fast-growing tech companies will continue to find access to cash. The ability of VC-backed technology companies to provide liquidity to investors or raise cash through an IPO or SPAC might be limited in the second half of 2022, but we anticipate a good longer-term outlook for the IPO market.

After an active year in 2021 that could only be described as a year no one expected, tech-focused VC investors continue to look for deals. The deal-making environment remains strong in comparison to every year other than 2021. Coming off a record year across many measures we follow closely, strong performance in the VC ecosystem can now be observed in fundraising, deal activity and deal values. Against a backdrop of continued global uncertainty, the first quarter of 2022 saw $71 billion in total U.S. VC deal value across an estimated 5,800 total deals. Again, that total value represented the highest amount of activity ever, with the exception of each quarter of 2021. 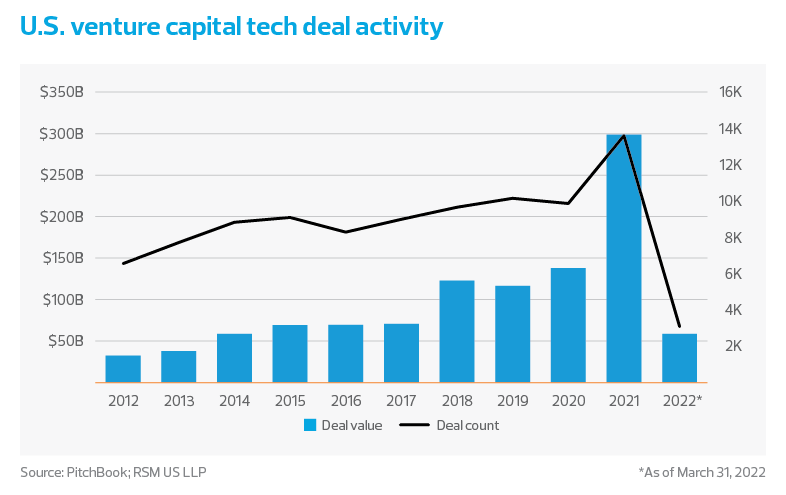 Fueling this deal activity is a continued healthy amount of VC fundraising, primarily in what has been termed megafunds—VC funds that have raised more than $500 million in a single fund. In the first quarter of 2022, VC fundraising saw 199 funds close, raising a total of $74 billion, which is more than the total raised in all of 2019, already nearing the $85 billion raised in 2020, and more than halfway to the total of $131 billion raised last year. This new fundraising has increased the dry powder estimated in the VC ecosystem to more than $300 billion, building off the estimated $230 billion at the end of 2021, according to fundraising data tracked by PitchBook. 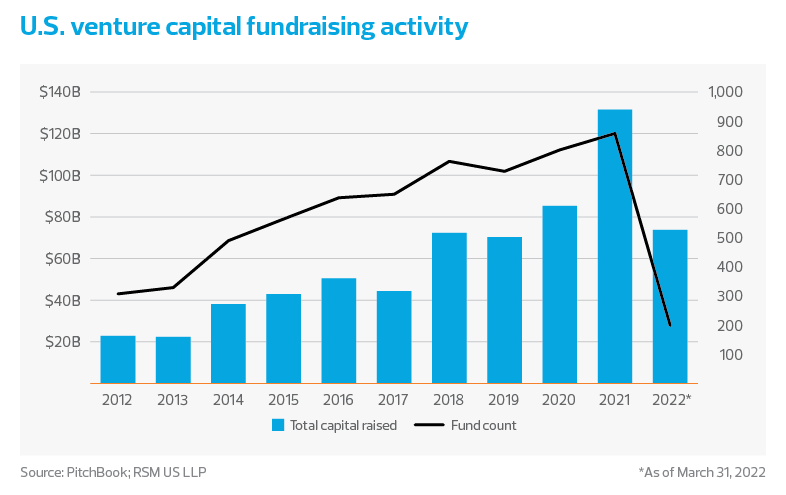 As the year goes on, we will continue to monitor deal activity, valuations and exit activity as the macro picture for tech is experiencing measurable pressure, with public market valuations slipping and the IPO market all but closing in response to the influences mentioned earlier. The valuation pressure experienced in the public markets will likely begin to trickle into the later-stage VC deal-making environment and apply downward pressure to the high valuations and multiples that have become common for the industry. Deal activity at earlier stages will also be a concern, specifically to what extent early-stage VC-backed tech companies are able to attract follow-on investors and increasingly large funding rounds. As investors brace for the changing investment landscape of elevated inflation, higher interest rates and continued geopolitical conflict, the effects could begin to make their way into even the earliest stages of VC investing.

From a private equity perspective, firms dug into their vast availability of capital in the first quarter of 2022 and completed or announced a few very large transactions in the TMT ecosystem to follow the record activity in 2021. Through the first quarter, nearly $90 billion of private equity deals were completed or announced across 320 U.S. TMT-focused deals. Driving this total is the completion of 14 megadeals, in which the total transaction value exceeded $1 billion dollars, contributing $75 billion to the overall deal value measured in the first quarter of the year. These megadeals include the $17 billion acquisition of Athenahealth, led by Hellman & Friedman as well as Bain Capital, and the $14 billion acquisition of personal security, identity and privacy provider McAfee by private equity firms Advent International, Crosspoint Capital Partners and Permira.

A diverse mix of buyers has emerged in the first half of the year as private equity firms have sold their TMT portfolio companies to other PE sponsors and public corporate acquirers, while also participating in take-private buyouts of large public tech companies. 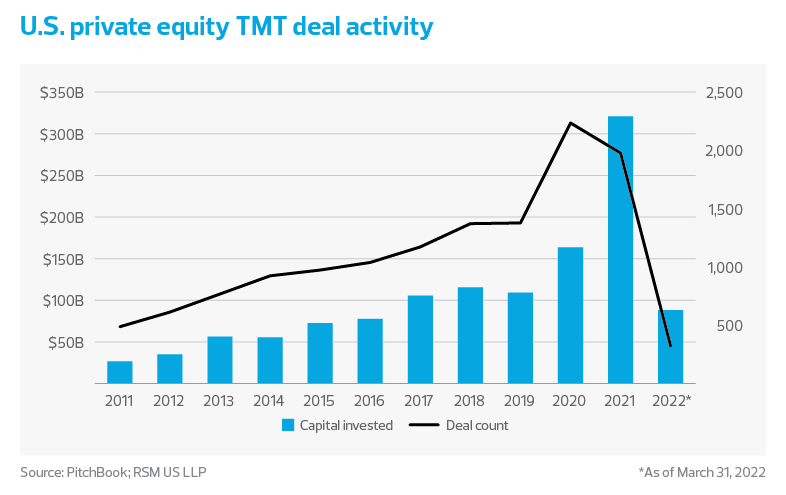 We expect private equity investors—whether historically focused on technology or on other industry verticals—to look for deals in the TMT ecosystem this year and in the years to come.

As the year moves on, the headwinds facing the broader economy could begin to find a path into the PE ecosystem as well, and could challenge the deal multiples and valuations that companies in the ecosystem are accustomed to demanding. This may also provide a buying opportunity for private equity sponsors looking for add-on acquisitions for existing portfolio companies, with the likes of Thoma Bravo, Vista Equity Partners and Silver Lake all completing large TMT deals in the first quarter of 2022.

Emerging tech areas such as artificial intelligence, machine learning and cybersecurity will be a growing focus for private equity investors as they mature, their market opportunities expand, and business applications and use cases continue to see rapid adoption. We expect private equity investors—whether historically focused on technology or on other industry verticals—to look for deals in the TMT ecosystem this year and in the years to come.

Get fresh perspectives on news, trends and insights that matter to technology companies.