What if you logged into your system to help a client and discovered that everything is encrypted and being held for a ransom of $1.7 million? Or what about that moment when you realize that your organization was just duped into transferring $283,000 not to a client but to a fraudster?

While these situations may sound like exaggerations, they are happening every day. Increasingly, beneﬁt plans are being targeted by hackers; this risk threatens plan administrators, participants, third-party record-keepers and payroll providers. Many organizations feel that they are too small to be targets; however, this perception of safety is tenuous at best. Retirement, health and welfare plans are tempting targets for hackers, but there are steps that organizations can take to protect themselves, their plans and their participants.

It is diﬃcult to make risk management decisions without understanding the realistic level of risk. Most of the cyberincidents we see in the media are high-proﬁle attacks of large, well-known companies. These cyberattacks are not the rule but the extreme exceptions. Based on the, 2019 NetDiligence Cyber Claims Study, which contains an extensive study of insurance claims for damages of cyber-related events from 2014—2018, the vast majority of the claims (about 84%) are from companies with revenues under $2 billion. In fact, most of these companies (about 74%) generate under $300 million. Companies that rationalize their risk decisions by thinking they are too small to be targets are setting themselves up to be victims.

The cost is real

The ﬁnancial and reputational damage of a cyber incident can be high, especially for beneﬁt plans where more than $1 trillion in combined contributions and beneﬁt payments ﬂow through retirement plans every year in the United States. There is a lot at risk, and no employee beneﬁt plan is immune. Regulatory claims are becoming more onerous, with the average claim in the last year hovering around $6 million. Notiﬁcations telling participants what was lost are becoming more expensive as well. 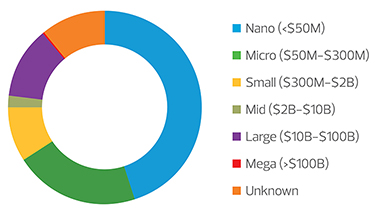 The most common cyber incidents that companies are dealing with today are ransomware and business email compromise attacks, which lead to some type of ﬁnancial fraud. The scenarios noted at the beginning are real, and the numbers canbe staggering. For example, an average robbery will earn the thief approximately $1,373. On average, a ransomware attackor business email compromise-related fraud will land the cyber attacker $72,000 and $166,000, respectively. The return on investment is signiﬁcant and the downside risk is minimal. As a result, companies are targeted via cyberthreats so the attacker can make easy money. 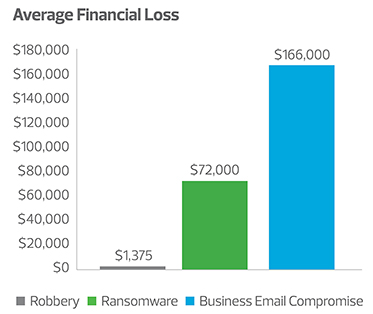 While the number has slowly fallen, nearly one quarter of claims had some type of insider involvement, either by employee mistake or through intentional action. It is worth noting that maliciously motivated insider events resultedin more expensive claims. To make matters more egregious (and expensive), the fact that the incident occurred,or the factors that allowed the incident to spread, often reveal that a company’s controls were not eﬀective.

Regulatory bodies alerted to an incident can declare such a company retroactively noncompliant, then ﬁne it for the total period they feel it was in violation. Costs related to regulatory actions can be further exacerbated if an organization is required to participate in an ongoing assessment program at the organization’s expense.

You are the target

Cyber events based on an attack against the user comprise 48% of the claims, while only 39% are related to a technical attack, such as hacking and malware. The attacks that are more focused on us, the everyday user, are more varied, and include attacks such as social engineering, phishing, staﬀ mistakes and lost devices. Despite the everyday user generating the greater risk, most companies spend the vast majority of their time and resources on technical defenses and discount the human risks. The best risk strategies address both technical areas and user awareness and training.

There are a number of threat scenarios that can lead to a cyber incident; however, there are two primary attack types we are seeing over and over.

These deceptions are hitting beneﬁt plans, often through bogus requests for access, demands to move funds, appeals for contact or contract information, or other manipulations. These breaches are usually considered the company’s fault, unless it can be proven otherwise. It’s worth noting that end users are most often hacked without the company’s involvement. The hacker is gaining access to the participant’s assets not by breaching the company, but breaching the user’s account directly.

What should you do?

There are a number of considerations and proactive steps that companies can take to help prevent against a cyber incident. While these proactive actions are a good start, remember that attackers continue to develop new techniques to compromise systems and gain access to critical applications that may contain sensitive information.

No organization is completely safe against cyberattacks, regardless of the eﬀorts taken to be proactive in preventing an incident. The key is to stop an attack when it is merely a security incident before it becomes a full-blown data breach.

Even despite these proactive steps, attackers continue to develop new techniques to compromise systems and gain access to critical applications that may contain sensitive information. No organization is completely safe against cyberattacks, regardless of the eﬀorts taken to be proactive in preventing an incident. The key is to stop an attack when it is merely a security incident before it becomes a full-blown data breach.