Economic headlines not cause for deceleration among automotive suppliers, manufacturers

Companies must ensure that business strategies appropriately balance the shift to EVs.

The rising cost of vehicles will be a continuing trend as the industry moves to more expensive electric vehicles.

We expect suppliers will experience sustained growth opportunities for the foreseeable future.

Despite inflation, opportunities still abound in the EV future

Automotive suppliers and manufacturers—like most other industries—are watching inflation and the Federal Reserve’s rate actions closely as the industry’s production environments continue to experience labor shortages, supply chain unpredictability and high consumer demand. While inflation is now at its highest level in over 40 years and interest rates are rising, opportunities will continue to abound for many automotive manufacturers and suppliers that align themselves to the electrified future of the industry.

Tapping into such opportunities will be a challenge for some, requiring companies to make significant changes in their business model. Those shifts may include divesting certain portions of their business while also looking for strategic acquisitions and partnerships focused on electric vehicle technologies. For others who supply parts or technologies that can align with internal combustion engine vehicles and/or EVs, it will be important to continue making efficiency-focused investments in automation, procurement reassessment and supply chain reevaluation. 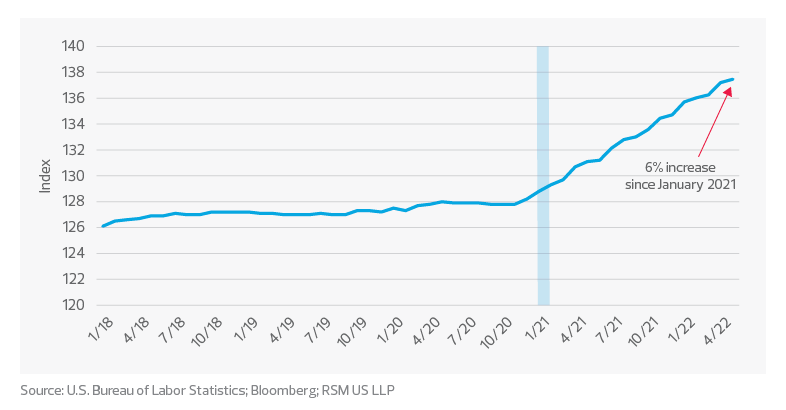 Manufacturers and suppliers have felt the impact of inflation over the last year in the cost of everything from steel and aluminum to semiconductors. These and other rising input costs—including energy, labor and logistics—are making it more and more expensive for suppliers to produce parts and are constraining or eroding margin growth. At the same time, while assembled vehicle production costs overall have increased for these same reasons, original equipment manufacturers have benefited from incredible market demand after the earlier phases of the pandemic. This has resulted in lower inventory levels and allowed for the near elimination of incentive discounts, which were historically required to sell inventory. The result has been greater profits by the OEMs amid lower production volumes.

Sustained demand in the market has made all this possible and is expected to continue into the foreseeable future. However, the industry is now also facing the Federal Reserve’s rate policy changes. Rates that have been near zero for the past two years increased 1.5% from March through June and are anticipated to reach 3.25% to 3.5% by the end of the year.

Automotive, along with housing, is one of the most rate-sensitive sectors in the economy and will most quickly reflect the impacts of these hikes—which means that understanding implications for the industry will be crucial. Rate increases will directly affect both suppliers’ and OEMs’ borrowing costs, making investments in research and development as well as future capital expenditures more costly, which may deplete some of the significant margins that companies previously experienced. On the demand side, while many might expect increased vehicle financing costs would immediately affect car buyers and slow down demand, the industry is adept in responding to such changes and will likely reinstate incentives when necessary or promote longer financing terms.

In the meantime, the rising cost of vehicles will be a continuing trend as the industry moves to more expensive electric vehicles that will include more advanced technologies and higher-priced commodities. The average new vehicle (taking into account vehicles overall, not just EVs) recently sold for approximately $43,000—$1,000 over the sticker price—according to a June report from Automotive News. For luxury brands the average was $65,000, and $1,100 over the sticker price.

The outlook for automotive demand and production

These increased costs do not present an obstacle to sustained demand, irrespective of current inflationary levels. As of the end of July, Americans had accumulated approximately $2.5 trillion in excess savings throughout the pandemic, and households are further supported by a strong labor market. While the lower two quartiles of households will find new car buying challenging and potentially opt for used cars going forward, a greater portion of consumers will continue to be active in the new-car market. 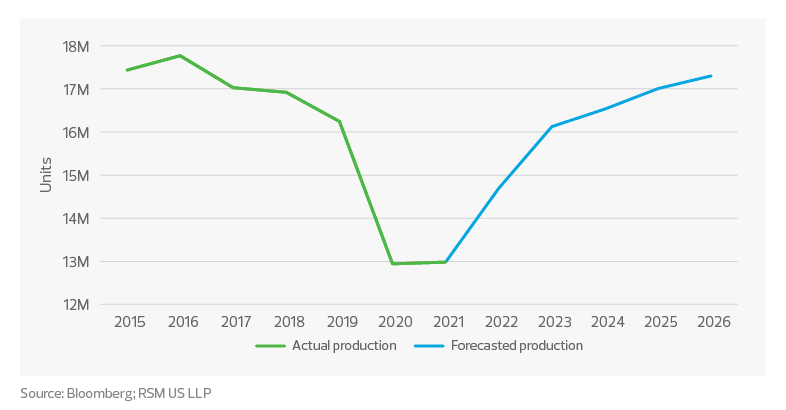 This means strong sales demand should continue into the foreseeable future, allowing suppliers’ and manufacturers’ operating cash flows to fund legacy technologies while at the same time allowing for the investment in future-facing EV technology strategies. For suppliers heavily dependent on internal combustion engine technologies, this is the time for strategic decisions, investments, and potential mergers and acquisitions connected to new EV and autonomous technologies.

Now is also the time to focus on extracting better data from the production process through greater digitization and automation of existing processes and upskilling of the current labor force. However, in an industry where margins can be razor thin, most suppliers and manufacturers will need to be creative as they look for greater production efficiencies to reap profit margins similar to those of their OEM customers.

Manufacturers and suppliers can look to those customers’ histories to better understand how to evolve, innovate and thrive when confronted with the need to reinvent themselves. One OEM, for instance, hired a new CEO with no automotive industry experience to transform its company culture and stave off bankruptcy, which the CEO achieved by mortgaging all the company’s assets to obtain the financing necessary to reorganize. While an extreme example, it demonstrates the lengths to which some organizations may need to go not only to survive, but to reinvent themselves as manufacturers of the future, aligned to the technologies that will have relevance and longevity in the industry.

Inflation and Federal Reserve policies will be manageable headwinds for automotive suppliers and manufacturers. With strong long-term demand for vehicles, and rapidly increasing demand for EVs, suppliers will experience sustained growth opportunities for the foreseeable future. However, companies must ensure that business strategies appropriately balance the shift from ICE vehicles to EVs and remain sensitive to the pace at which the industry moves toward electrification. Strategies may include identification of new joint venture partners, acquisition of entities with necessary EV technologies or engaged in R&D, greater automation, or reevaluation of supply chains. Each of these areas will enhance organizations’ opportunities for future success.

The life-cycle cost of EVs is now often lower than gas vehicles when taking into account long-term gasoline and maintenance costs, making them a great choice for commercial fleets. Organizations could consider investing in their own charging infrastructure and EV fleets if their vehicles are uniform, take many short trips and are driven a lot each day. The initial setup cost is undeniably hefty—therefore mainly larger companies with sufficient capital have made the investment so far. The upfront investment required is likely a major barrier for middle market companies. Companies should closely monitor when public charging infrastructure is adequately developed to support fleets that take long-distance trips, and make further investments in more commercial EVs as needed when that time comes.

Sign up to receive our monthly tax, accounting and operational information ranging from tips for addressing daily challenges to strategic and long-term planning initiatives.