How high must unemployment rise to tame inflation?

Despite the economic pain that will be required to restore price stability, it is ultimately in the interest of the real economy that it be done and done quickly.

In 1980 and 1981, Fed Chairman Paul Volcker arguably did the right thing by hiking the overnight rate to 18% to 20% to create the conditions to restore price stability over the long term.

While the current bout of inflation in the United States will not require that type of root-canal economics, it will be necessary over the coming year or two to drive the unemployment rate higher.

Restoring price stability is now the paramount policy goal at the Federal Reserve. That objective will shape economic conditions over the next few years in a manner that will most likely result in slower growth and higher unemployment.

But how high must unemployment rise to push inflation back toward the Fed’s 2% target?

For an answer, we revisit the Phillips curve—which shows the relationship between inflation and the unemployment rate—to estimate the job losses that would be required to meet such a difficult goal.

We then introduce a new variable—the RSM US Supply Chain Index—that accounts for the supply chain distortions during the pandemic and improves the performance of the Phillips curve model.

To reduce inflation to acceptable levels—using the personal consumption expenditures price index as our preferred metric—it will be necessary to sacrifice between 1.7 million and 6 million jobs, in our estimation. That decline would translate to an unemployment rate that rises to a minimum of 4.6%, or possibly as high as 7.2%.

First, it will be difficult to get back to a 2% inflation target in the near term without triggering a recession that results in somewhere between 5 million and 6 million job losses.

Second, the Fed could engage in “opportunistic reflation” and lift its inflation target to 3%, which would require an increase in unemployment to 4.6% and result in a loss of roughly 1.7 million jobs.

That is as close as we may get to a soft landing. While that outcome would be optimal, resetting the inflation target from the flexible target of 2% announced two years ago would hurt the Fed’s credibility.

Named after the economist A.W. Phillips, the Phillips curve has become a cornerstone of modern macroeconomics. In his seminal paper published in 1958, Phillips pointed out the inverse relationship between unemployment and wage growth.

Since then, the curve has been extended and augmented to show the short-term relationship between unemployment and inflation, with major contributions from two Nobel laureates in economics, Edmund Phelps and Milton Friedman, in the 1960s.

The theory behind the trade-off between unemployment and inflation is that when unemployment is low, wage income is higher, which fuels more spending demand in the short run.

Given the stickiness of supply in the short run, an increase in demand will push prices higher, causing inflation to rise. The opposite is also true: High unemployment leads to lower inflation.

But in recent years, and especially during the pandemic, the Phillips curve relationship has become less clear, adding to the reasons why both market participants and the Fed’s inflation forecasts were so wrong.

In hindsight, the primary explanation for the Fed's failure to stay in front of the curve regarding inflation is the unique pandemic-related supply chain disruptions, which have been anything but transitory.

Given that explanation, we revisit the Phillips curve to identify the level of unemployment that would be needed to bring inflation back down to the long-term target, but with an important twist: adding a proxy variable for supply chain deficiencies using data from our proprietary RSM US Supply Chain Index. 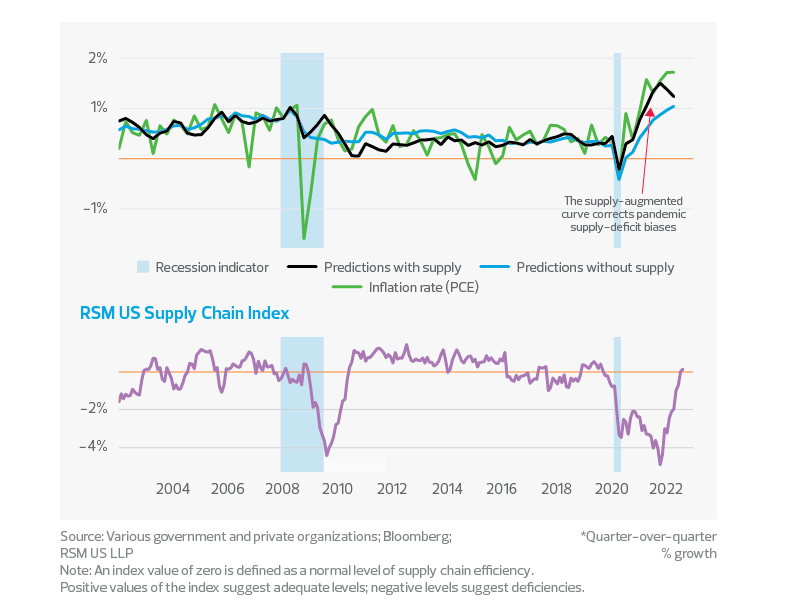 The inflation prediction results from both Phillips curve versions—those with and without the supply chain index—are shown in the graph above.

Similarly, from 2012 to 2016, when there was a supply surplus, the supply-augmented Phillips curve shows a much better fit to the actual data, correcting the upside biases.

With the supply chain index added, the predicting performance of the Phillips curve in the studied period improves by 73% in terms of mean-squared error benchmarks.

We can use the supply-augmented Phillips curve to identify different levels of unemployment rates that would be required for the Fed to reestablish price stability. To do this, we make three key assumptions.

First, we assume the natural rate of unemployment will stay at 4.4%, in line with the CBO's estimate for the next two years.

Second, we assume that the supply chain index will go back to its pre-pandemic average level of 0.5. This is a reasonable assumption because the July reading for the index was 0.29—above neutral for the first time since the pandemic hit.

The Fed's inflation expectation index is based not only on professional forecasts but also on consumer surveys, which are heavily correlated with energy and gasoline prices.

Even though the Fed's long-term target rate remains at 2%, we believe inflation will remain a lot stickier because of demographic and globalization disruptions that have transformed the macroeconomic environment from one of insufficient aggregate demand to insufficient aggregate supply. Our base case points to a 3% inflation target toward the end of next year.

To reach the 3% base case in terms of PCE, the economy would have to shed 1.7 million jobs to get to a 4.6% unemployment rate.

This unemployment rate would be close to the natural rate of unemployment forecast by the CBO at 4.4%, another reason we think this base case is much more manageable for the Fed without pushing the economy into a severe recession.

To reach the Fed's long-term inflation target of 2%, the cost would be much higher: 5.3 million jobs and a 6.7% unemployment rate. 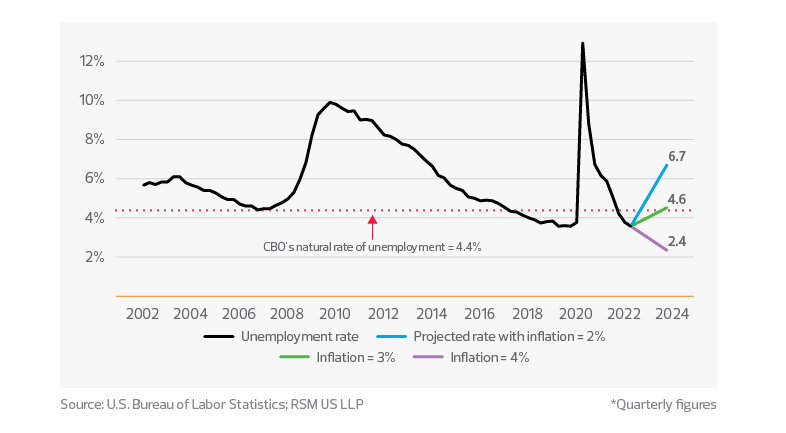 We do the same exercise but with the consumer price index as a proxy for inflation. The levels of unemployment needed to reach the same levels of inflation are much higher because CPI inflation often runs higher than PCE inflation.

Using the supply-augmented Phillips curve, we estimate the marginal impact of inflation expectations on the unemployment rate shown above.

If inflation expectations increase by 0.1 percentage point from 2.15% in the base case above, to reach the same 3% PCE inflation target rate, the economy would have to sacrifice 6 million jobs at a 7.2% unemployment rate.

This underscores why we believe the Fed should continue to increase its policy rate to 4% at the end of this year—to reduce inflation at a much faster rate than what the market is pricing in.

We are in the midst of a serious cost-of-living crisis that cannot be ignored. The Fed needs to do all it can to stabilize prices that most affect working families: food, fuel and housing. This requires policies that cool overall aggregate demand and cause unemployment to increase.

The Phillips curve finds a short-term inverse relationship between the level of inflation and the level of unemployment.

Using the Phillips curve framework, we find that all things being equal, it will be necessary to generate higher unemployment, which means that millions of people will be out of work before inflation is brought under control.

Tighter monetary policy sacrifices short-term employment opportunities in order to stabilize prices. Price stability is needed for maximum sustainable employment, growth at or above the long-run trend of 1.8% and a stable set of financial conditions.

Despite the economic pain that will be required to restore price stability, it is ultimately in the interest of the real economy that it be done and done quickly.

In 1980 and 1981, Fed Chairman Paul Volcker arguably did the right thing by hiking the overnight rate to 18% to 20% to create the conditions to restore price stability over the long term. While the current bout of inflation in the United States will not require that type of root-canal economics, it will be necessary over the coming year or two to drive the unemployment rate higher.