An arduous, yet critical conversation is needed in corporate America to address the racial wealth gap and inequity embedded in the U.S. economy, responses from a recent RSM US Middle Market Business Index survey show.

The issue of racial equity in the United States is now front and center amid a series of tragic deaths followed by civil unrest in 2020. Economists, journalists, social advocates, scholars and others are delving deeply into the connections between America’s racial disparity and wealth, health care, housing, education and morbidity, among other factors, as they attempt to unpack the country’s longstanding history of inequity along color lines.

The corporate world, for its part, is also grappling with this difficult topic, taking a more active role in fostering often-uncomfortable discussions among employees of all levels and developing solutions to resolve inequities in the areas of recruiting, compensation and career advancement, to name a few. Corporate diversity and inclusion efforts have become table stakes for many businesses embracing new standards of transparency.

Diversity and equality of opportunity is not just a moral imperative, but it is a matter of economic competitiveness. According to a report of the W.K. Kellogg Foundation, the U.S. economy could be $8 trillion larger by 2050 if the country eliminated racial disparities in employment, education, health, criminal justice and other domains. Recognizing that all Americans should have the opportunity to earn their success, rise on their merit, and live their own American Dream, the U.S. Chamber of Commerce’s Equality of Opportunity Initiative advances sound policies and business solutions to help address inequalities across our society.” - Rick Wade, Senior Vice President, Strategic Alliances and Outreach, U.S. Chamber of Commerce

Middle market businesses appear to be taking a cautious, yet optimistic approach on the issue of racial equity, according to data gleaned from special questions in the fourth-quarter 2020 MMBI survey. While most executives polled indicated that their companies had taken some actions that can lead to solutions for the issues of racial inequity, there was no consensus around any specific steps.

A strong majority said their organization is taking the right actions to address racial tensions (87%) and that racial equity is good for business (82%). But despite these sentiments, just 28% of respondents made a public statement in support of racial equity or facilitated discussions among their employees on the topic (27%). Only 23% provided resources such as books or articles, while only 21% formalized strategies to modify their culture. Even lower percentages of respondents said they conducted unconscious bias training (20%), modified their codes of conduct (20%), contributed to social justice causes (19%), or changed their hiring targets (16%). Thirty-one percent took no actions at all. 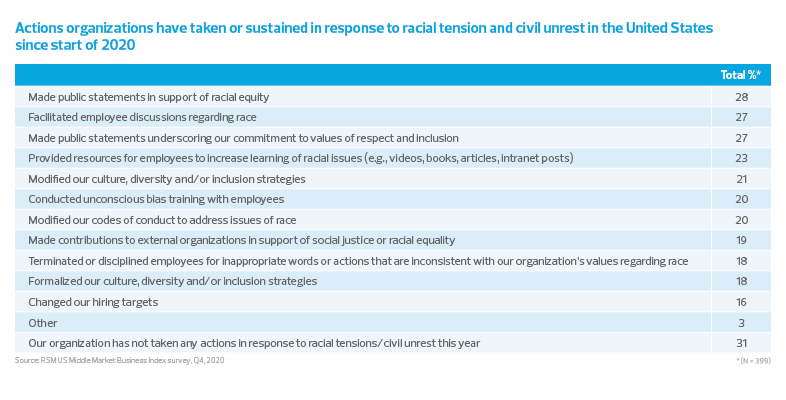 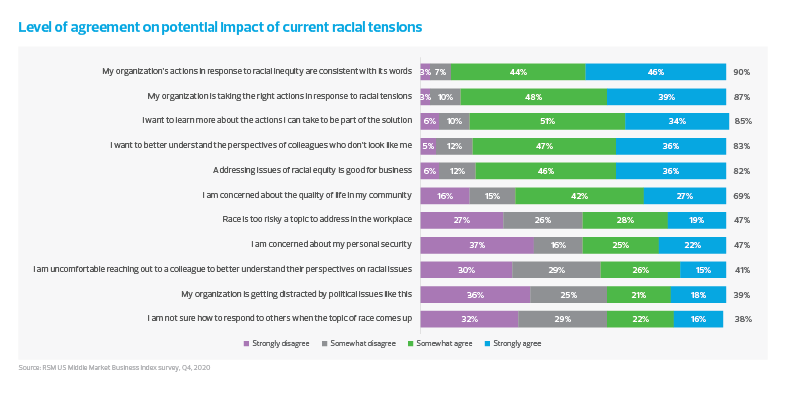 But openness to change on the issue of racial disparity was clear in the survey. A full 83% of executives said they wanted to better understand the “perspectives of colleagues who don’t look like me,” while 85% wanted to learn the actions they can take to be part of the solution. Fewer than half (39%) said political issues like this were a distraction for their business. The survey included responses from just over 400 middle market executives, who were polled from Oct. 5 to Oct. 23, 2020.

Caution around this highly fraught and sensitive topic appeared to be the watchword. Nearly half of respondents (47%) said that race is a topic “too risky to address in the workplace.” Smaller, midsize companies, or those with annual revenues of $50 million to $1 billion, were significantly more reticent than their larger counterparts (57% vs. 38%). Forty-one percent said they were uncomfortable broaching the topic of racial issues with a colleague.

Gaps in education, employment and wages

Separately, other data sources around education, employment and wages in the United States also underscore the need for change. Nationwide, in school districts with more than one high school, those schools with the highest enrollment of nonwhite students offer less access to courses necessary for admissions to college, with only 57% of Black high school students able to take a full range of math and science courses, U.S. Department of Education data shows.

Spending by schools also highlights disparity along color lines. Nationally, average annual spending per pupil is $2,200 less for minority students than white students, with half of students in the United States attending racially concentrated schools, according to EdBuild, a funding advocacy group. In California, schools that serve a student body comprised of 90% or more of minorities spend $4,380 less annually per pupil than those serving 90% or more white students, according to the Center for American Progress. 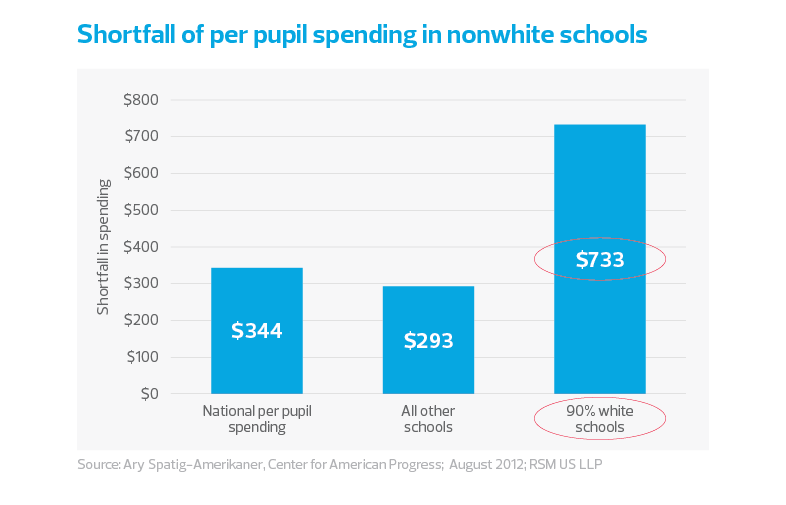 The conversation on race and business is evolving quickly, as it impacts both people and financial performance. With this evolution go the regulators and boards of directors, as the business strategy is examined and inclusion maturity equates to relevance for the future of the middle market. RSM is a key thought leader in effective ways to leverage the MMBI data and optimize inclusion for greater business results.” - Tracey Walker, National Senior Director of Government Affairs and Culture, Diversity and Inclusion, RSM US LLP

Employment figures tell a similar story. Government data shows that the unemployment level for white men aged 20 and older has averaged 4.8% since 1972, the earliest year for which government data is available. For Black men, joblessness has averaged 10.6% over the same period. For white women, unemployment during this period has averaged 4.9%, versus 10% for Black women. These gaps increase during economic downturns such as the pandemic-induced recession, and then endure for months before narrowing again during ensuing recovery 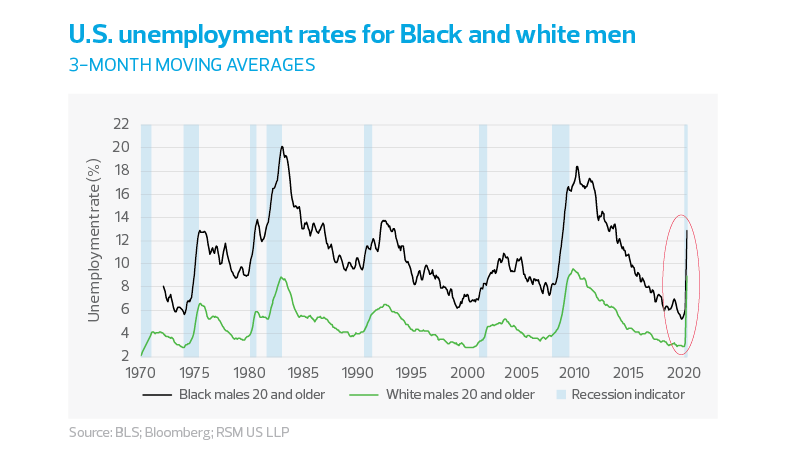 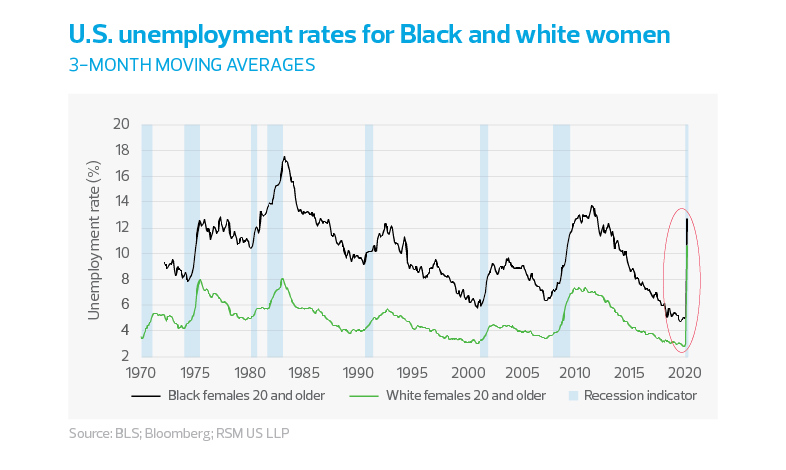 Unemployment disparity by race in the United States is exacerbated by the wage stagnation of the past four decades. Looking at inflation-adjusted weekly earnings of salaried employees since 1979, earnings in real, inflationadjusted terms, have been flat, with an average annual increase of just 0.4% since 2000. The wage inequity of Blacks, compared to American blue-collar workers overall, is pronounced, with Black men being paid just threequarters of the earnings of male employees on the whole. Data collected on wages since 2000 imply that the real earnings of Black men have increased by 0.4% annually, on pace with that of their white counterparts, but are still largely stagnant. 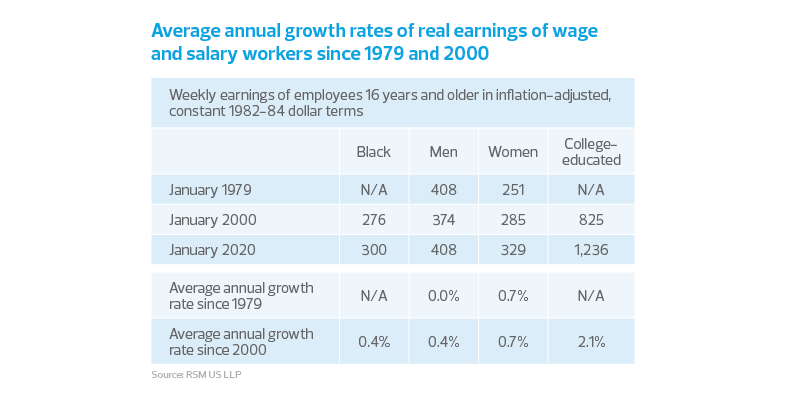 These patterns are likely evidence of longstanding bias in education, hiring, advancement and overall economic opportunity. That is why it is essential that businesses of all stripes take up the mantle for change with clear policies and practices to break the patterns of inequity.

Why should businesses care about education of minorities?

If the future of U.S. economic growth is in innovation and advanced manufacturing, then growth cannot be limited to just one shrinking segment of the population. Instead, we need to invest in the intellectual capital of the entire labor force.

Why should businesses care about education of minorities? If the future of U.S. economic growth is in innovation and advanced manufacturing, then growth cannot be limited to just one shrinking segment of the population. Instead, we need to invest in the intellectual capital of the entire labor force.