Every four years, the Securities and Exchange Commission is required by the 2010 Dodd-Frank law to modify the rules protecting investors. The original protections were put in place in 1982, but with the relentless pace of change in innovation, technology and investment options, those rules may quickly become outdated or irrelevant.

This is particularly true when it comes to the stunning growth of the family office as an investment vehicle. The concept is simple in theory: a wealthy family decides to form its own firm to look after its assets rather than rely on an outside investment adviser such as a private equity firm.

But providing safeguards has been a more difficult proposition. So in an effort to bring clarity to what constitutes a family office, the SEC in December approved measures that would streamline the definition of an accredited investor by establishing minimum asset and oversight standards.

If the measures are adopted, the accredited investor definition will be one of the tests family office investors would need to pass before investing in the private markets, including private equity, venture capital and hedge funds. The recent proposed amendments would include a number of updates but in particular, they would clearly define the role of family offices and family office clients.

For years, the definition of a family office was unclear. Several musty pieces of legislation—the Investment Advisers Act of 1940, the Securities Act of 1933, and the Investment Company Act of 1940 – all had some legal authority over the industry.

Then in 2011, a new rule—separate from reform under Dodd-Frank—was adopted to allow family offices to provide investment advice to family members without having to register with the SEC. While this rule made it easier to establish an investment vehicle for a family, it still did not institutionalize any minimum standards for net income or wealth.

In recent years, though, pressure has been building for clarification – especially as hedge funds and private equity firms have increasingly sought to convert into a family office in a move to ease the regulatory burdens tied to operating outside money. 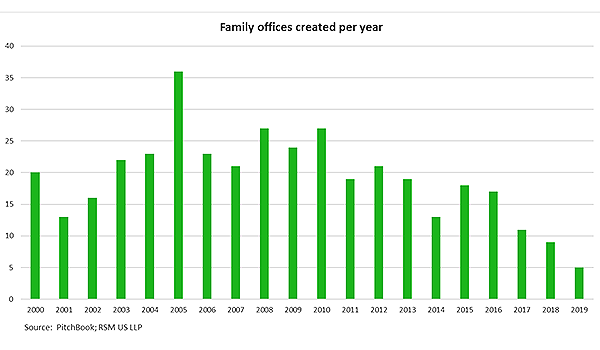 Enter the vote on Dec. 18, 2019, by the SEC. As the number of direct deals completed by family offices continues to increase, the uniform definition of a family office is more relevant than ever to avoid any regulatory violations.

The SEC proposal would treat any family office as an accredited investor if the below are satisfied.

Randy Abeles, principal in RSM’s family office business, said it succinctly, “Family offices come in all shapes and sizes and the differences from one to another can be vast.”

The SEC acknowledges that most existing and newly created family offices will exceed the low hurdle of $5 million in assets under management. In addition, recent trends in the data show that most family offices are led by a competent family member or investment committee that has experience in making investments that require sophistication.

But there are cases where it’s not so clear. The uniform definition of a family office is much needed for a sector of the economy that is expected to grow as the consolidation of capital is a result of the number of families looking to keep affairs private increases.

The proposed amendments will be subject to a 60-day public comment period according to the SEC and if they pass that could be finalized by the middle of 2020.

This article was originally published on The Real Economy Blog.