This article was originally published in September 2018; it has been updated to reflect the release of final regulations related to sections 250, 951A, and 962.

The passage of the 2017 Tax Cuts and Jobs Act (TCJA) was heralded as the beginning of a new age in international taxation. Finally, the injustice of the double tax on dividends received by United States shareholders from foreign corporations was put to rest for good … at least for those United States shareholders who were also already using a corporate tax structure. For those who were not, some temporary relief may be available in the form of a section 962 election.

Individuals with investments in profitable foreign corporations, including through pass-through entities such as partnerships and S corporations, must contend with immediate double-taxation of foreign earnings on an annual basis under the section 951A Global Intangible Low-Taxed Income (GILTI) regime: the local jurisdiction taxes the income and then the U.S. takes another cut. For a corporate taxpayer, the combination of a reduced corporate rate, a special deduction, and access to indirect foreign tax credits (FTCs) largely mitigates the impact of GILTI – except in scenarios where the foreign entity was paying an extremely low local tax rate. Individuals and pass-through entities receive no such benefits.

Consequences of the election

Consider an individual who owns, directly or through a pass-through entity, 100 percent of a Cyprus-based services company which pays a 12.5 percent rate of local income tax. If the Cyprus company generates $1,000 U.S. dollars of income, that income is first subject to $125 U.S. dollars of Cyprus taxes, then potentially the entire $875 U.S. dollars remainder could be currently taxed as GILTI and subject to an additional 37 percent U.S. individual tax rate in the year incurred2 (note that GILTI inclusions are not eligible for the new section 199A business income deduction3). The outcome: a current effective tax rate of approximately 45 percent, regardless of whether the individual owner draws a dividend or reinvests the business’ earnings.

If this individual makes a section 962 election, his or her current tax liability will be reduced.  Under section 962, the individual will generally pay tax on his or her pro rata share of GILTI as if he or she were a U.S. corporation.  Thus, the reduced corporate rate of 21 percent will apply and the individual may claim an indirect credit with respect to any foreign taxes that the foreign corporation has paid.  Treasury has also issued final regulations which would allow the individual to claim the 50 percent deduction against GILTI which is otherwise only available to corporations.4 The application of the deduction and indirect foreign tax credit substantially reduces or eliminates the tax due from the individual in the current year. The foreign entity is now free to reinvest its earnings locally with minimal need to make a distribution so that the individual can pay additional U.S. taxes.

However, there is a reason this election went largely unused until now. Pass-through structures such as S corporations are popular in the United States in large part because they eliminate the domestic double-taxation of corporate income. Just as a section 962 election provides for the benefit of a corporate foreign tax credit, it also creates the detriment of an extra layer of U.S. tax on the dividend. Thus, when a foreign corporation makes a distribution to a United States shareholder who has made a section 962 election, the individual may pay tax at normal ordinary income rates but only on the amount of the distribution that exceeds the amount of tax previously paid as a result of the section 962 election. A tax court decision held that such distributions are generally subject to tax at ordinary rates rather than the reduced qualified dividend rate if dividends from the foreign corporation would normally be considered ordinary rather than qualified dividends. However, a distribution from a “qualified foreign corporation” would likely be eligible for the lower rates applicable to qualified dividends.

The following diagram compares the treatment of a taxpayer who makes a section 962 election to one who does not: 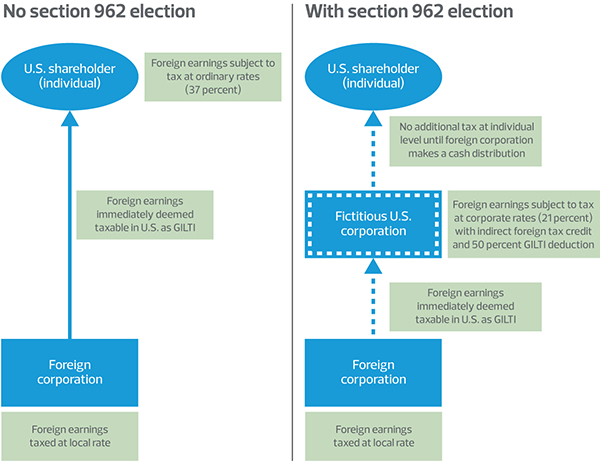 The GILTI high-tax exclusion introduced in final Treasury Regulation section 1.951A-2(c)(7) created a major new consideration for U.S. individual shareholders making section 962 elections. This election, in brief, allows for certain foreign company income to be excluded from GILTI where the effective foreign income tax rate applicable to such income exceeds 90% of the current U.S. corporate tax rate. Under current law, this means that GILTI may not apply to the income of controlled foreign companies paying an 18.9% foreign tax rate or greater. For a taxpayer whose only GILTI exposure is from such high-taxed foreign companies, the section 962 election may no longer be necessary as the GILTI inclusion may be fully eliminated.

If the U.S. shareholder makes a section 962 election, the GILTI inclusion would be subject to a lower immediate rate of tax (10.5% effective rate at corporate level). Additionally, if both the 30%-taxed and 0%-taxed foreign companies are being included in the GILTI income and foreign tax credit calculations, the excess FTCs generated by the 30%-taxed company may “soak up” U.S. GILTI tax imposed on the earnings of the 0%-taxed company. Thus, choosing not to make the high-tax exclusion election could simultaneously increase the U.S. shareholder’s GILTI inclusion and decrease the U.S. shareholder’s overall tax liability.

Because of the complexities inherent in these two elections and their interaction with one another, modeling may be needed to identify whether a GILTI high-tax exclusion election is beneficial or not when taken in conjunction with a section 962 election. As this election is made at the level of the controlling domestic shareholder and not necessarily the ultimate individual owner, an individual may need to communicate with a domestic pass-through entity to clarify whether it is making the election and if it will impact the individual’s personal section 962 election decision.

The section 962 election may be a valuable tool in softening or deferring the double-tax blow of being a U.S. shareholder in a foreign business – but careful consideration should be used before making the election. Depending on the specific circumstances, using section 962 could result in an individual paying a greater effective rate of tax on their foreign earnings once they have been repatriated. The election is administratively simpler than forming an actual intermediary corporation, but subtle differences in distribution ordering and other rules could cause it to provide different tax outcomes which may need to be modeled in advance. The availability of the section 962 election may also impact the value of a GILTI high-tax exclusion election. The right choice will vary depending on each taxpayer’s unique circumstances and needs. A taxpayer considering making this election should consult his or her tax professional or advisor to discuss his or her specific situation.

Choose from timely legislation and compliance alerts to monthly perspectives on the tax topics important to you.
Select your preferences now.