The novel approach of the decentralized exchange (DEX) is gaining traction.

DEX market share as a percentage of total digital asset trading volume has risen from less than 1% in 2020 to over 10% in 2022.

Governments around the world have started to take notice from a regulatory perspective.

This is the fourth and final piece in our introductory series on decentralized finance, commonly known as DeFi. In our prior pieces we've introduced DeFi and explored its core building blocks—the smart contract and token. In this installment we explore one of the first DeFi use cases, the decentralized exchange.

At the heart of DeFi is the decentralized exchange, or DEX, a smart contract-based platform which enables the peer-to-peer exchange of tokens. What sets a DEX apart from its centralized counterpart is how the market generally operates and who receives the economic rewards. Because DEXs run on open-source blockchain technology, these platforms have been able to achieve significant growth despite having no official employees or regulatory recognition.

The novel approach of the DEX is gaining traction too. DEX market share as a percentage of total digital asset trading volume has risen from less than 1% in 2020 to over 10% in 2022. 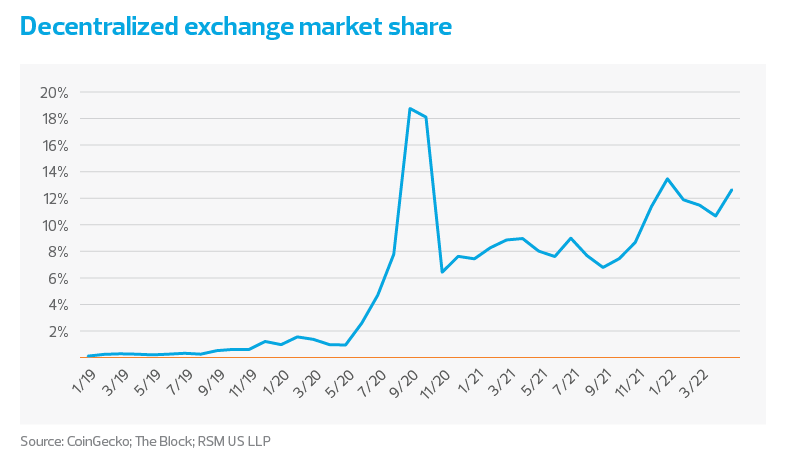 Most DEX platforms don't operate a traditional order-book-style exchange, in which traders deposit their assets with a centralized broker and place buy or sell orders at specific bid and ask prices. Rather, they use what is called an automated market maker (AMM) approach. With this model, liquidity providers (LPs) provide their assets to the DEX's liquidity reserves for each trading pair. The largest trading pair on most DEX platforms is one that enables trading between ether (ETH) and the Circle USD stablecoin (USDC). An LP will send an equal amount, in dollar terms, of ETH and USDC to the smart contract, which then pools the ETH and USDC with the assets of other LPs and becomes available for users to trade against. A trader may then send an amount of ETH to the pool and request an exchange for USDC. The trader will pay a small fee, generally 0.3%, which is deducted from the USDC received. This fee is split by LPs proportional to their contribution to liquidity reserves. The DEX takes no profit.

An AMM’s exchange ratio, or asset pricing, is determined by an oracle, a data feed that links the blockchain to the real world by providing external and executable information. Because an oracle that simply looks to an external, centralized market price could be susceptible to manipulation, most DEXs use a complex algorithm that adjusts the price based on asset flows and relies on arbitrage traders to help maintain the fair market value.

DEX users generally manage the exchange with governance tokens. The underlying computer code that drives these exchanges is all open-source. The ability to inspect and audit the code is core to the trustless nature of a blockchain transaction. The ability to edit the code, whether to fix bugs or make improvements, is open to anyone through a proposal and voting mechanism. Many DEXs have chosen to distribute governance tokens to their users, often through an airdrop to early users.

The governance tokens’ sole function is to vote on proposals for changes to a DEX’s underlying protocol. Despite having no rights to profits or distributions, governance tokens generally have significant economic value. Coders frequently will request compensation for their work in the form of an allocation of governance tokens from the DEX's treasury. In the traditional context, this would be akin to a company's software developers paying themselves in equity.

The largest DEX, Uniswap, launched in November 2018 on the ethereum blockchain. By June 2020 its monthly trading volume was $330 million. So far in 2022, Uniswap has averaged $60 billion in monthly trading volume. A common metric used to compare traditional brokerages is daily average revenue trades (DARTs), and Uniswap is currently averaging 450,000 DARTs. That’s roughly one-fifth the size of the Interactive Brokers centralized exchange.

Cumulative monthly revenue across all DEX platforms peaked in November 2021 at $500 million, and recent months have averaged around $180 million. Total DEX revenue in 2021 was around $3.25 billion—an achievement all the more remarkable for an industry with no official employees. 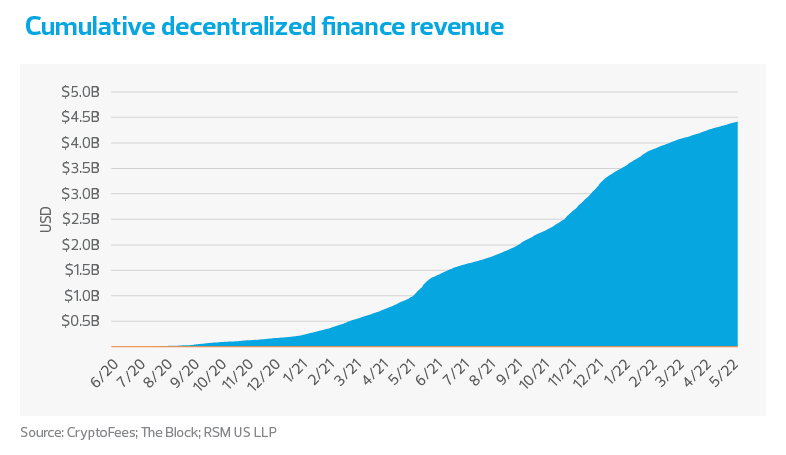 DEXs achieve their explosive growth through leveraging blockchain technology to scale, and they also use blockchain technology for nearly everything else, like data storage, security, transaction processing and customer records. The DEX only needs to write the smart contract and launch a graphical user interface (although technically this is optional). Because of this, in the Web3 world the cost to grow and acquire new users is effectively zero.

What to watch for: Regulatory attention

One thing a DEX cannot currently leverage its blockchain for is regulatory compliance. With the massive growth of DeFi in general, governments around the world are taking notice and announcing plans to impose various transaction reporting requirements. Traditional financial regulations have long leveraged intermediaries for compliance (i.e., know-your-customer regulations, sanctions enforcement and tax reporting). In theory, DeFi gets rid of these centralized actors and distributes these responsibilities to the participants. This means there are likely two paths forward regarding DeFi regulations.

The first path, currently favored by most governments, is to challenge the platform’s claim of decentralization. Is a DEX really decentralized if the core group of developers all work for the same company and collectively control a majority of the governance voting power? The SEC certainly thinks so and has recently proposed rule changes that would expand the definition of an "exchange" to include "communication protocol systems." Such a rule would test a truly decentralized DEX's ability to comply. However, if there is a group with effective control, the SEC would likely pursue an enforcement action.

It is worth noting that the main Uniswap user interface, run by Uniswap Labs, recently imposed location-based restrictions on certain derivative tokens available on the DEX. Uniswap Labs cited "the evolving regulatory landscape" in its reasoning for limiting access to people based in the United States. U.S.-based users can still trade these tokens through alternative interfaces or through direct interaction with the smart contract.

A second path for regulatory compliance is emerging, and may be more promising. It acknowledges the decentralized nature of DeFi and the importance of safeguarding the world's financial markets. This path would not be easy, but has the potential to leverage blockchain technology for growth, similar to the DEX strategy. The approach would be to build compliance and reporting tools into the protocols, to distribute the reporting responsibility and automate the process wherever possible. In March 2022, the blockchain data analytics firm Chainalysis launched two free sanctions compliance tools for the DeFi industry. These open-source tools could be implemented into a DEX through a protocol improvement proposal and a majority vote from the governance token holders.

Perhaps the end result will be a hybrid approach in which development teams and users share the responsibility for ensuring the safety and soundness of the financial markets. Clearly the regulatory landscape is rapidly evolving. The question is, can it keep up with the pace of technology?

Check out the different sections of our industry outlook
Swipe

Sign up now for a monthly update on the marketplace trends important to financial institutions, capital markets, asset management and other financial services.