Why the housing market is not in a bubble

The housing market is as hot as ever, helping to lead the economy out of the recession as builders scramble to keep up with demand. Rising prices have followed, with the median price of new and existing homes jumping 22% and 21%, respectively, from April 2020 to May of this year.

But the surge has prompted a question: Is the housing market in a bubble like the one that preceded the financial crisis of 2008 and 2009?

A close examination of the data shows that we are just not there. Not only are inventories below their historical averages, but buyers are also more creditworthy—two significant differences from the housing bubble of the years before the Great Recession.

MIDDLE MARKET INSIGHT: Not only are inventories below their historical averages, but buyers are also more creditworthy—two significant differences from the housing bubble of the years before the Great Recession.

What’s more, underlying demand linked to demographic changes and the recent rise in coronavirus cases will continue to push people to the suburbs in search of more space, even as low interest rates and a lack of supply drive prices higher.

Household finances are also strong. Even though the ratio of household debt to household wealth has increased recently, it is well within manageable levels.

So while prices are rising, the housing market has more room to run, and will most likely avoid a repeat of the housing crash that nearly brought down the U.S. economy over a decade ago.

Revisiting the previous housing boom, and the crash that followed, can highlight what’s different this time. Before the Great Recession, homebuilding reached all-time highs, with starts and permits climbing well above the 1.5 million annualized rate that represents equilibrium in the market.

The National Association of Home Builders confidence index hit new heights in 2005, reaching 72. Money was flowing into the housing markets, the government was promoting homeownership for all, and financial institutions vastly expanded those who could qualify for financing.

Relaxed lending standards fueled the surging demand, and adjustable rate mortgages, often provided with little or no money down and unverified income, became a time bomb in the financial markets.

It couldn’t last. Borrowers eventually could not repay their mortgages, causing them to default, and the bubble popped. 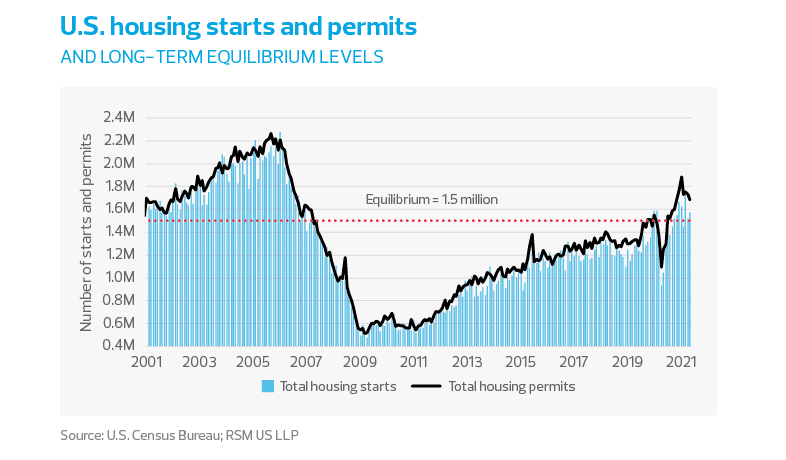 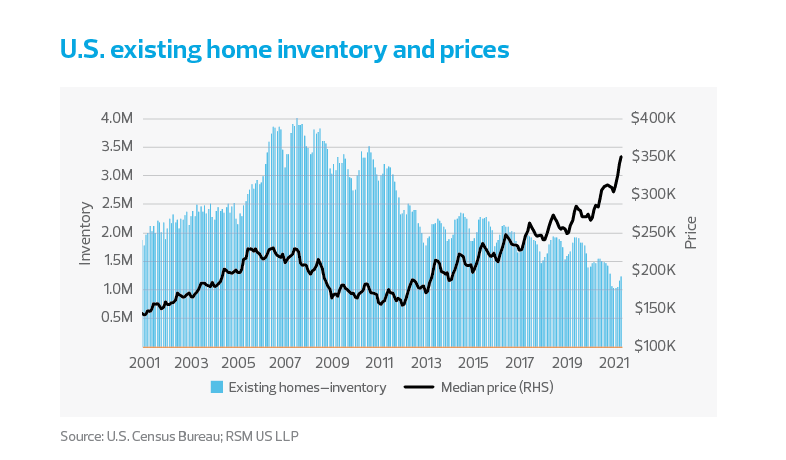 After the bust, the market went into a slump as builders, and buyers, lost confidence. Builders over the next decade, wary of taking on risk, significantly underbuilt new homes as inventories of existing homes for sale gradually declined.

At the same time, the seeds for an inventory crunch were being sown. Millennials reached their peak homebuying age, and corporations like American Homes 4 Rent, which was founded in 2012, saw an opportunity to generate cash flow by snapping up single-family houses at low prices and renting them. This strategy, which only further constricted supply, is now being deployed by some of the nation’s most established builders.

Fast forward to today. Builders are catching up, with housing starts and permits climbing above the 1.5 million unit annualized equilibrium in October 2020 and largely staying there since then. The National Association of Home Builders confidence index has been above 80 since September.

Concern about a bubble has followed. But there are key differences between today’s housing market and the pre-Great Recession housing market.

While it may feel that housing is primed for a bubble, the economics are straightforward. With limited supply and robust demand, prices will continue to rise.