In the modern era of monetary policy and moderate growth, global authorities have shown twice in the past decade their ability to counter horrific shocks to the financial sector and economic activity. Therefore, inflation expectations remain remarkably well anchored despite the recent five-month surge in topline inflation.

Investors understand and believe that if the transitory nature of the current increase in inflation turns out to be more persistent, central banks possess the tools and the will to change policy to address those challenges. That is why expectations for moderate rates of inflation are crucial for the orderly and sustained growth of an economy.

By the end of 2020 and before the vaccination program was fully implemented, expectations were for inflation to average 2.15% over the next 10 years. At present, and because of greater  price volatility due to the sudden reopening of the economy, the surge in consumer demand and subsequent supply chain issues, expectations are for the inflation rate in the next few years to move above 2.3% before settling down to roughly 2.25% over time.

There are numerous examples in recent history where inflation has reacted to shocks, ranging from Spain and Italy—prior to going under the wing of the European Central Bank—to Argentina, where misguided monetary policies led to episodes of rampant inflation and currency devaluations. But current and forward-looking inflation expectations do not imply anything comparable happening in the domestic economy.

Just before the pandemic in February 2020, expectations for near-term inflation were pushed downward as concerns grew that the global manufacturing recession would push the U.S. economy into recession. Still, expectations were for the Federal Reserve to successfully engineer the 1.2% inflation rate toward a healthier level of 2%, and for the economy to sustain a 2.25% rate over the next 10 years. 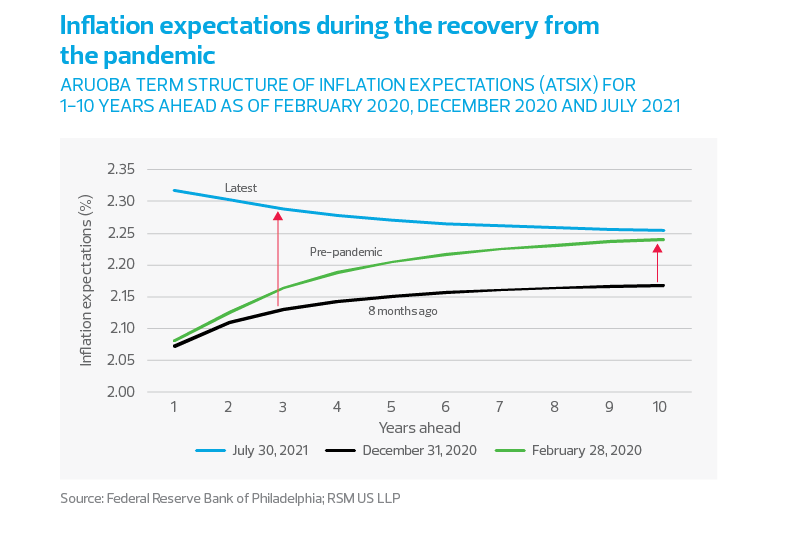 The Fed’s preferred metric of inflation expectations has been the market-based five-year/five-year forward rate. Currently, the bond market is pricing in the context of increased risk to the economy from the spread of the delta variant, but a projected long-term inflation rate of less than 2%.

As of the middle of August, the yield on 10-year Treasury bonds has dropped again to below 1.25% from its local peak of 1.7% in mid-April. If the initial move up to 1.7% can be rationalized as a response to higher growth and inflation concerns, then this recent move below 1.25% in the midst of an economic recovery must be the converse.

The factors in this down cycle likely include:

Regardless, sub-2% interest rates by any degree are not what a healthy economy would support and suggest the need for additional government response. A fiscal stimulus that invests in productivity and competitiveness of the U.S. economy will pay for itself when interest rates are this low. 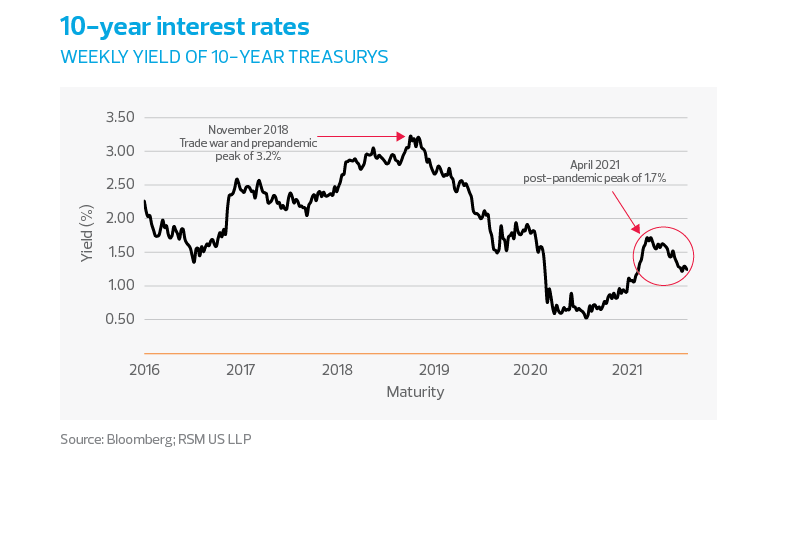 The increase in inflation to above 5% has pushed the real (inflation-adjusted) yield on 10-year Treasury bonds even lower, to negative 4%. We expect inflation to have peaked and to normalize toward a 2% rate as the surge in economic demand moderates and supply chain issues are resolved.

The goal of the monetary policy is to facilitate investments by pressuring interest rates lower. A negative real yield curve and expectations for a growing economy and sustained normal levels of inflation will allow those investments to be paid back in inflation-depreciated dollars. 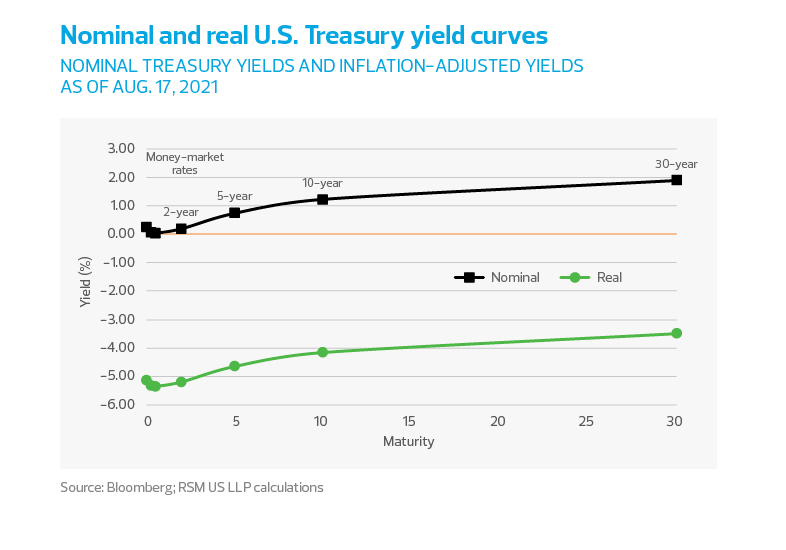 Confidence in the recovery—which had nearly eliminated the perceived risk of economic collapse and deflation—once again turned sour over the summer months. While that could be the result of summertime trading, it is most likely due to the resurgence of COVID-19 cases among the unvaccinated American public and the potential for additional shutdowns overseas, in Japan and China in particular.

There are never straight lines in asset pricing, but the recent drop below zero priced into the term premium for 10-year Treasury yields and the decline in expectations for short-term rates over the next 10 years both reflect a rethinking of the recovery’s trajectory.

At the same time, Fed guidance consistently calls for lower-for-long money market rates. If all goes to plan, the result will be an economy that can support higher long-term interest rates, while monetary policy pressures short-term interest rates lower. That would create a steep yield curve out to 10 years that would be conducive for bond trading as an alternative to riskier investment in other assets. 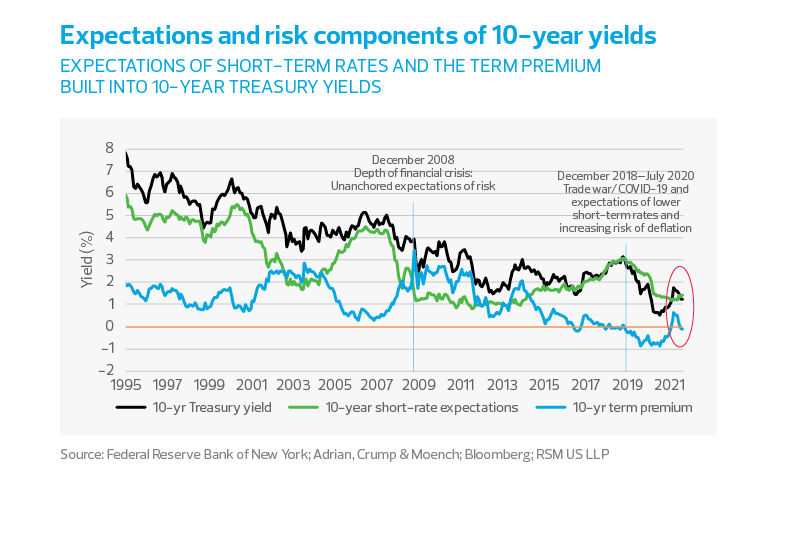 Because of structural shifts in the global economy—the rise of automation, the advent of the global supply chain and the adoption of inflation-targeting by central banks—the expected return on investment has trended lower, particularly in the aftermath of the global financial crisis and the Great Recession. As such, developed economies arguably can no longer support the high real (inflation-adjusted) rates of return in earlier decades.

Currently, the bond market is pricing in the context of increased risk to the economy from the spread of the delta variant, but a projected long-term inflation rate of less than 2%.

During the decade-long recovery from the Great Recession, U.S. real short-term interest rates were negative and below the natural rate estimates for all but a few periods. That indicates monetary policy has been accommodative, even during the period of interest rate normalization near the end of the 2010–2019 business cycle that drew so much criticism.

In our estimation, the decline in the natural rate from the Great Recession to the present and the concurrent secular decline in 10-year yields and GDP growth suggest structural issues in the economy that we have yet to overcome. Despite the best efforts of the monetary authorities, fiscal authorities may need to do more to avoid becoming the Japan of this century.

We need to create the foundation for the next economy, both in physical terms—via traditional structural improvements based on rethinking of the energy and broadband grids—and in intellectual terms, by addressing deficiencies in the education and health of the labor force. The United States is no longer the leading exporter of the world. Efforts to rebuild the old economy are likely to turn out shortsighted and be a waste of resources.

As our analysis indicates, an increase in the natural rate in the first quarter is a positive first step toward normalization of interest rates and offers the potential for a sufficient return on investment and the re-imagining of the U.S. economy. 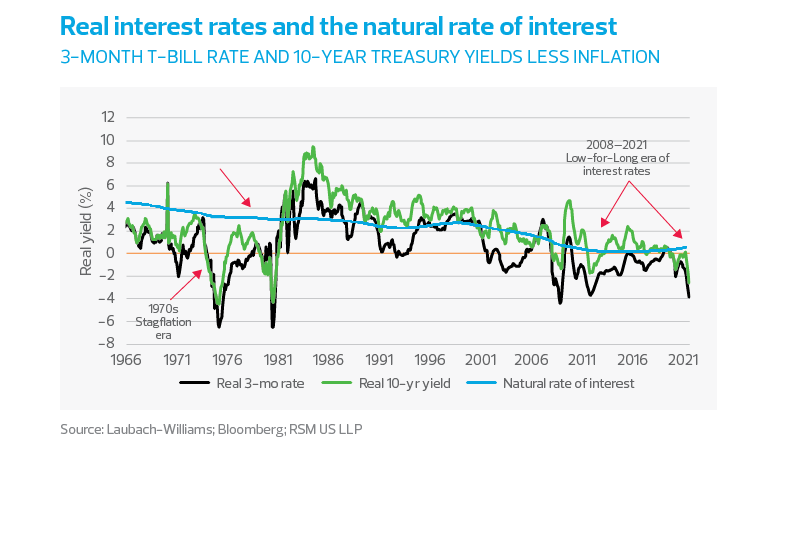 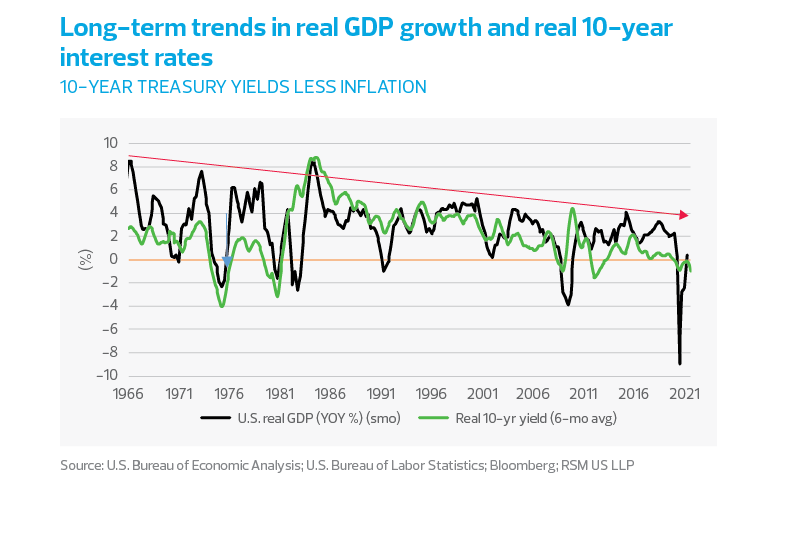 High-yield bond spread: The confidence in the vaccination program and the subsequent economic recovery is evident in the reduced spread between high-yield corporate bonds and U.S. Treasury bonds from March 2020 to the present. A growing economy indicates diminished risk of corporate default, and a reduced premium required to hold those bonds.

The recent uptick in the spread is a reminder that the population is far from fully vaccinated.

A negative real yield curve and expectations for a growing economy and sustained normal levels of inflation will allow investments to be paid back in inflation-depreciated dollars.

The bid-to-cover ratio: This ratio in the Treasury market has remained comfortably above 2, an indication of the demand for Treasury securities despite their lack of return relative to riskier assets.

Foreign purchases of U.S. Treasurys: Purchases of Treasury bonds by foreign investors continue to increase. We attribute this to increased commercial demand for parking profits (from trading with U.S. importers) in U.S. securities, and the implied demand for safe-haven purchases. Increased demand in any form will help keep a lid on increases in yields and will allow the Fed to think about reducing its purchases of long-term bonds.

Foreign issuance of negative debt: The financial markets are international and interconnected. As such, the health of foreign economies plays a substantial role in the attractiveness of U.S. securities. When the debt is issued at negative interest rates in order to limit loss, the demand for U.S. debt issued at positive interest rates would be expected to rise.