Venture capital activity this year has been well below the explosive pace set last year.

Economic headwinds set in during the third quarter to cool off the blazing market.

Despite the notable drop-off in deal values, deal volume has endured, though cracks are forming.

Venture capital deal and exit activity for the first nine months of the year was well below the explosive pace set last year as various headwinds set in during the third quarter.

Deal activity through September totaled $194.9 billion, down 22% compared to $251.1 billion over the same period in 2021, according to data from PitchBook. 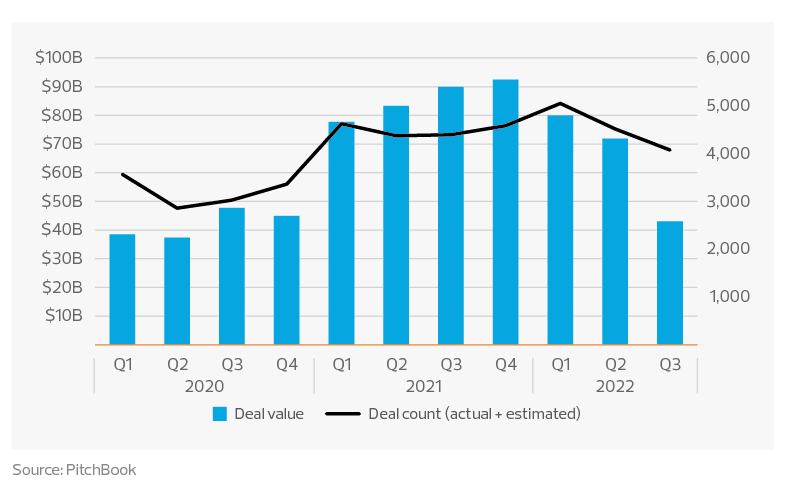 The third-quarter deal activity total of $43 billion was the lowest recorded since the second quarter of 2020. Activity in the third quarter fell by 40% from $71.9 billion in the second quarter, showing that sentiment has finally caved amid growing uncertainties.

Markets are fretting about the Federal Reserve’s ability to bring inflation to heel without tipping the economy into recession because of the Federal Open Market Committee’s sustained interest rate hikes. Investors have also had to contend with geopolitical tensions and significantly weakened financial conditions.

Despite the notable drop-off in deal values, deal volume has endured, though cracks are forming.

PitchBook estimates this year’s total deal count through September at 13,636, ahead of the 13,391 deals closed in the first nine months of last year. This sets a record for the first three quarters of the year. However, this year is unlikely to take over the full-year deal count record, as the third quarter showed signs of a slowdown, with only 4,074 deals closed compared to 5,049 and 4,513 in the first and second quarters, respectively.

The relatively modest 10% decline in deal count compared to the 40% collapse in total deal value means that average and median deal sizes have fallen.

This decrease is pronounced in the late-stage category, where medians and averages have dropped from $14.55 million to $11.53 million and $52.15 million to $39.65 million, respectively.

Other stages have held up well, showing that appetite for large deals has waned while the record pace of deal counts was sustained by early-stage, angel and seed venture capital activity. This is expected—investors shy away from writing bigger checks and prefer smaller deals in more uncertain times.

Exit activity has been the biggest stumbling block for venture capital firms this year. Following years of one home run after another in the form of large initial public offerings of venture-backed companies, exit channels this year have dried up. As of the end of September, PitchBook estimates that total exits amounted to $63.4 billion, down a whopping 89% compared to the $585.7 billion through the end of September last year. 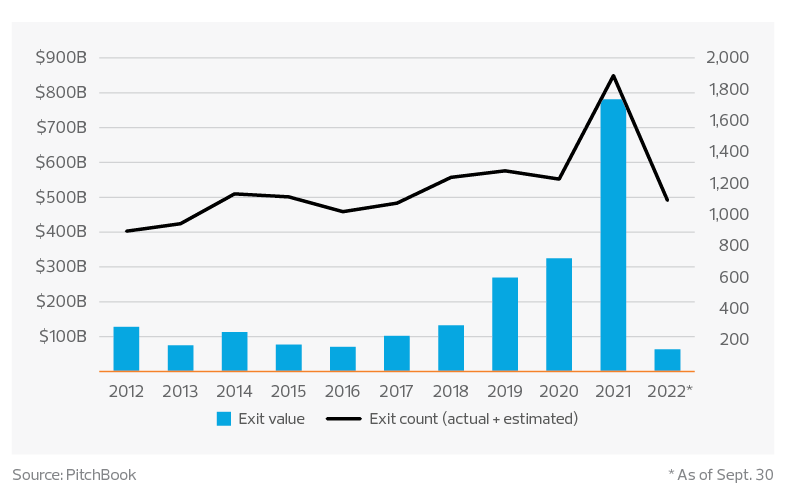 Fundraising has been resilient this year, with the impressive returns from recent years still holding sway in investors’ memories. Despite the economic headwinds, investors have continued to allocate to venture capital, hoping that venture capital managers will recapture the magic that saw activity double between 2020 and 2021.

With three months remaining in the year, U.S. venture capital fundraising activity reached $150.9 billion at the end of the third quarter, eclipsing the full-year total of $147.2 billion from last year. This is remarkable given that last year was a banner year, having recorded a 66% increase over 2020. 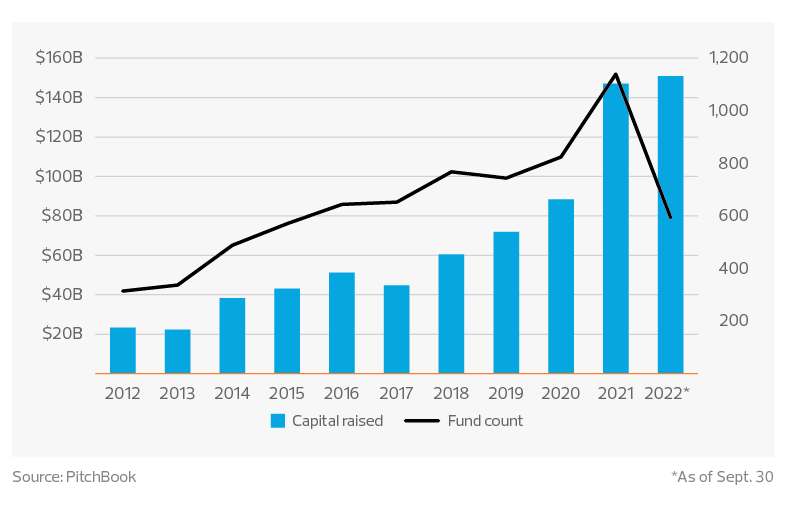 The record fundraising this year has, however, been dominated by the larger and more established venture capital fund managers. This can be seen in the fact that only 593 new funds made up this year’s record fundraising total as of the third quarter, compared to 1,139 for last year’s full-year total. This suggests that the average size of new fund launches has increased to $254.5 million from $129.2 billion, and that fundraising has been concentrated among big-name fund managers that can pull off bigger launches.

Deal values have slowed in the most recent quarter even though deal counts remain high, with investors shifting to deals in the earlier stages of the venture capital life cycle to manage risk by underwriting smaller deals that still have a longer runway ahead of them.

A frozen exit market is likely to sustain for the remainder of the year, challenging fund managers’ ability to return funds to investors. This will limit the room that investors have in their portfolio allocations to enable them to recycle capital back into new fund launches. We expect this to continue a trend of forcing limited partners to be more selective about the managers they will invest in.

While venture capital fundraising has remained robust, small to midsize managers will have to battle hard to get their share of any new capital, as larger firms dominate in this selective environment.