In the long run, U.S. needs a productivity miracle

The Congressional Budget Office recently published its long-term budget outlook for 2020. Not surprisingly, its forecast of a 107% debt-to-GDP ratio in 2023, rising to 195% in 2050, garnered all of the attention. But beneath that headline are significant policy challenges facing the U.S. economy.

Because of demographic and structural changes to the economy, long-term growth has slowed noticeably. Once one looks at the baseline assumptions, it’s clear that absent significant changes to immigration policy, the United States is going to need a productivity miracle.

First, let’s look at the projected long-term growth rate. Because of a confluence of demographic and structural changes to the economy, long-term growth has slowed noticeably and is expected to be roughly 1.5% over the next 30 years. Most important, the slowdown in the growth of the labor force, which economists have been shouting about for some time, is not well aligned with current immigration policies. 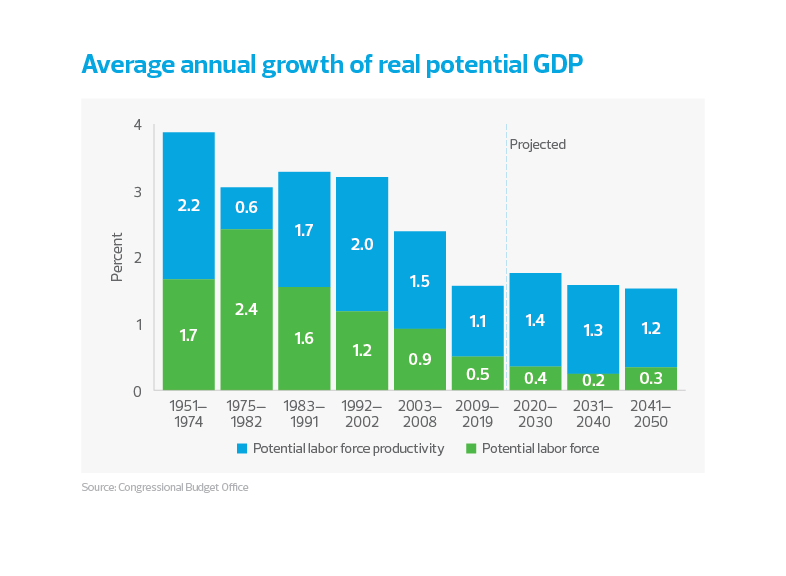 Assuming there will not be significant growth in the labor force anytime soon, the United States needs a much faster pace of growth to mitigate the permanent damage to the economy wrought by the pandemic. That can be generated only with a significant improvement in productivity. The CBO projects a long-run growth trend of only 1.8% over the next decade, and slowing to the 1.5% rate over the next 30 years. Clearly, this is not going to be sufficient to address the damage to the economy and produce fast enough growth to offset those growing deficits.

Second, take a look at the differentials in the trajectory of federal debt as a percentage of GDP based on just a 0.5% change in total factor productivity compared to the baseline projection. If total factor productivity is just 0.5 percentage points faster, that 2050 projection of 195% of GDP turns into a much more manageable 155% of GDP. Economists often state that in the short run, productivity means little, but in the long run it is everything. This data illustrates that undeniable truth.

Third, the Federal Reserve’s recent Summary of Economic Projections implied that the policy rate, or the federal funds rate, will remain at zero through 2023, the endpoint of its forecast. The move to the zero-interest-rate policy early in the pandemic caused a general shift down in the U.S. Treasury curve to the point where on most days, once one adjusts for inflation, the curve is negative out to the 30-year maturity spectrum.

For this reason, the deficit and debt dynamics of the United States almost require the Fed to maintain its zero-interest-rate policy for the near future; this is part of the reason why the central bank recently chose to change its policy regime to a flexible average inflation-targeting one. 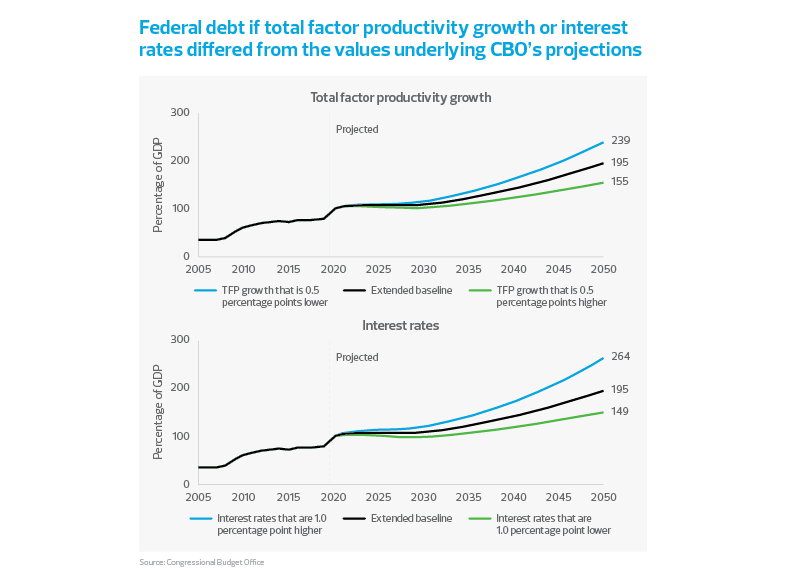 We are not arguing here that the United States does not have fiscal space to address the long-term damage linked to the pandemic or its pressing social and economic needs; it clearly does. But there will need to be significant policy changes to support faster productivity and growth. One way to increase productivity and growth would be to permit businesses to expense all of their outlays on equipment, structures, software, and intellectual property and other intangibles.

Based on the data presentation by the Congressional Budget Office, the status quo is clearly not sustainable.