I truly care about people's wellbeing, and that's how I have created not only professional relationships, but friends, with people at RSM.
Carl Ashqar, Partner
See all current job postings at RSM
Contact RSM

U.S. growth and the business cycle

What are the economic indicator peaks and troughs telling us?

It appears likely that U.S. gross domestic product growth in the current business cycle peaked in mid2018, bolstered by the 2017 Tax Cuts and Jobs Act and the U.S. federal budget agreement for fiscal year 2018. Following the tax reform, GDP reached 4.2 percent in June 2018 and is decelerating toward a long term trend rate of 1.8 percent.

In our estimation, the economic impact of the tax cut peaked in October 2018 and is now fading. The budget agreement is still providing net support for overall economic activity, which will be reflected in GDP in early 2019, bolstered by the public construction sector, which jumped 3.7 percent in February. However, unless a bipartisan budget agreement is reached before the end of 2019, a $126 billion fiscal cliff awaits the U.S. economy in the 2020 fiscal year, and will begin acting as a drag on overall growth later in 2019.

A review of leading indicators of economic activity can provide forward-looking middle market company executives, investors and policymakers critical insight as the U.S. economy heads into the late innings of this current business cycle. 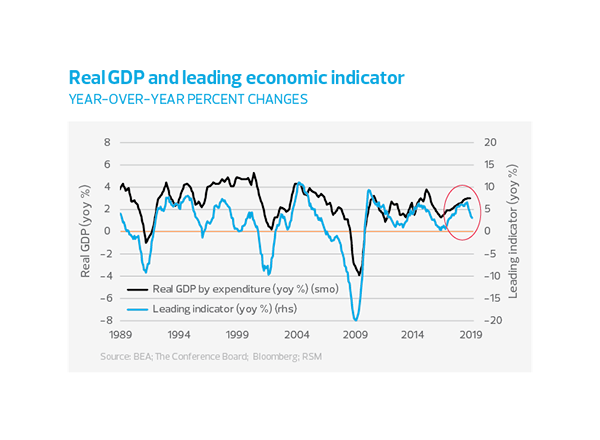 Foremost among these is The Conference Board’s monthly Leading Economic Index®, or LEI, a composite index of 10 economic and financial metrics whose turning points have historically preceded those in the U.S. economy. At present, the LEI suggests GDP growth peaked in third quarter 2018.

Recessions (and recoveries) are determined by the judgment of the National Bureau of Economic Research when business cycles peaked and troughed, rather than the convention of defining a recession as two consecutive quarters of negative growth. Nevertheless, using the performance of The Conference Board’s LEI as a guide, we can see that economic recovery since the Great Recession of 2007 to 2009 is second only to the so-called dot-com business-cycle upswing of the 1990s, which ended with the 2000 recession when the bubble burst.

As the chart below indicates, business cycles are not necessarily smooth. Events and price shocks—such as the impact on global supply chains from the Fukushima nuclear disaster of 2011, the spillover from the 2010-12 European debt crisis or the 2015 collapse in global oil prices—can create intermediate peaks and troughs within longer-term trends in GDP growth.

To help anticipate the risk of a local peak turning into a full-fledged downturn, we’ve constructed a Deceleration Index based on the economic and financial components of The Conference Board’s LEI. If a component has improved since the previous month, it is assigned a value of 1; if it has deteriorated, it is assigned a value of negative 1. An indicator showing no change is assigned a zero value. The index is equal to the average of the assigned component values, and reported as a percentage. Note that the low points in the Deceleration Index have anticipated intermediate business-cycle troughs. 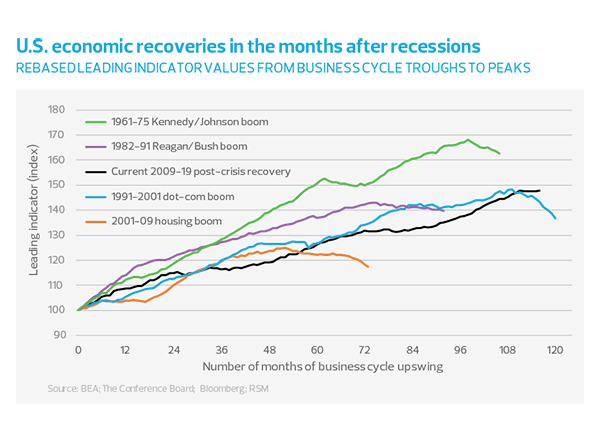 During third quarter 2018, The Conference Board’s 10 components worsened in October. From construction and manufacturing components to interest and credit expectations as well as consumer expectations, not since the Great Recession were so many indicators negative at the same time.

The Deceleration Index captures the sharp falloff in overall economic activity that started in third quarter 2018 and has yet to stabilize. While there are tentative signs of stabilization in soft data, such as the sentiment of purchasing managers, we have yet to observe a sustained period of stabilization in hard data. Given the negative impact on data collection due to the U.S. government shutdown from Dec. 22 to Jan. 25, we may not observe that until mid-2019.

The average weekly hours worked in the manufacturing sector have been declining off and on since April 2018, suggesting either an increase in the labor pool or a slowdown and less need for overtime.

Initial jobless claims are not decreasing as fast as earlier in the recovery. Yet, the nature of the relationship between unemployment and the business cycle suggests the need for more data to confirm the presence of a trend.

A REVIEW OF LEADING INDICATORS OF ECONOMIC ACTIVITY CAN PROVIDE FORWARD-LOOKING MIDDLE MARKET COMPANY EXECUTIVES, INVESTORS AND POLICYMAKERS CRITICAL INSIGHT AS THE U.S. ECONOMY HEADS INTO THE LATE INNINGS OF THIS CURRENT BUSINESS CYCLE.

Despite the upturn in residential homebuilding since mid2016, the growth rate of permits resumed a downward trend, reflecting household caution (see below), an aging population and a generational shift in housing tastes. In any case, the decrease is not a good sign for further economic growth.

Great gains in consumer sentiment were made during the recovery, but household expectations for business and economic conditions eventually flattened and deteriorated in the last quarter 2018.

IN OUR ESTIMATION, THE ECONOMIC IMPACT OF THE TAX CUT PEAKED IN OCTOBER 2018 AND IS NOW FADING.

New orders Purchasing managers have been reporting a deterioration of new manufacturing orders since March 2018, which can unfortunately indicate a longer-term impact on economic growth.

New orders for the manufacture of consumer goods appeared to trail off in the third quarter after a nine month upswing. This is linked to the various trade spats in which the United States is currently engaged and the global growth slowdown that accelerated in late 2018.

New orders for the manufacture of capital goods (excluding aircraft) have been trending lower throughout 2018, perhaps signaling the effects of the administration’s tariff policies.

Credit conditions remain benign as the market continues to respond to the Federal Reserve’s still-accommodative policy on lending rates. Note, however, that bank senior loan officers report tightening of loan requirements for commercial and industrial loans.

The stock market is not the best predictor of overall economic growth. Although the wealth effects of this autumn’s stock market crash—for the half of the population that invests in stocks—were more or less resolved by the January upswing, the hyperbolic damage to sentiment for most everyone is unlikely to be resolved anytime soon. As the crash proved, there were too many policy inconsistencies for the good times to last. And it is unlikely for the stock market to remain the only source of return for as long as it did during the era of low-for long interest rates that characterized the decade long economic recovery.

The Conference Board, among others, points out that an inverted yield curve has been a good indicator of an upcoming recession, with market values of long-term interest rates relative to policy-set values of short-term rates reflective of perceptions of near-term growth versus that of later periods. Given current financial conditions, we think the yield curve likely presents a head fake and that a recession is not imminent.