Can the dollar's surge continue? Already, Japan has chosen to intervene to prop up the yen.

The U.S. dollar index surged by 14% against its traditional trading partners, gaining momentum as the impact of the war in Ukraine and the European energy crisis has set in.

The looming price cap on Russian oil, to be imposed on Dec. 5, will help push foreign exchange markets toward one of the bigger moves to the dollar in recent memory.

Interest rates in the rest of the world failed to keep up with the Federal Reserve’s short-term raise to 18%, resulting in international investment flocking into U.S. assets and a rising dollar.

The U.S. dollar is on a tear, increasing in value against its traditional trading partners as well as against the Chinese renminbi.

A combination of factors is fueling the surge, including rising interest rate differentials, a global move to the safe haven of the dollar and an escalation of geopolitical tensions, especially in Ukraine.

The economic implications are straightforward. A stronger dollar tends to dampen inflationary pressure as Americans gain greater purchasing power. In a time of rising inflation, this is not insignificant. As the dollar rises, the price of imports falls, which in turn lowers costs for consumers and businesses. At the same time, though, the cost of exports increases, which hurts companies that ship their goods abroad.

The result has been a stunning rise in the dollar’s value. From Jan. 1 through the middle of September, the dollar has appreciated by roughly 12% versus the euro, 14% against the British pound, and 24% against the Japanese yen.

Overall, the U.S. dollar index surged by 14% against its traditional trading partners, gaining momentum as the impact of the war in Ukraine and the European energy crisis has set in.

The euro and British pound versus the dollar 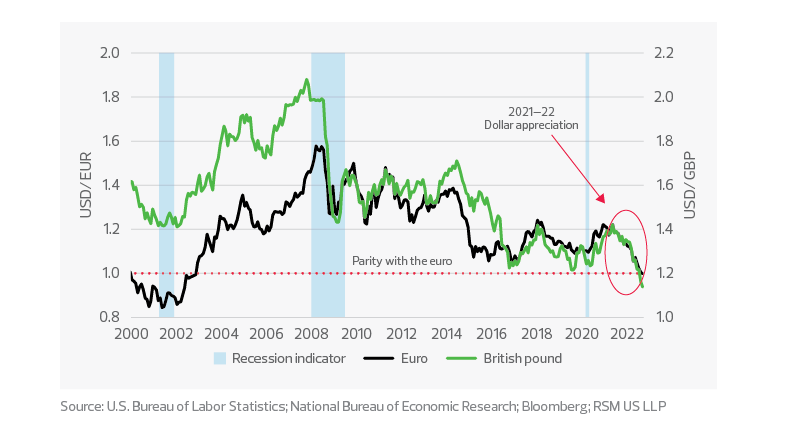 The euro and British pound versus the dollar 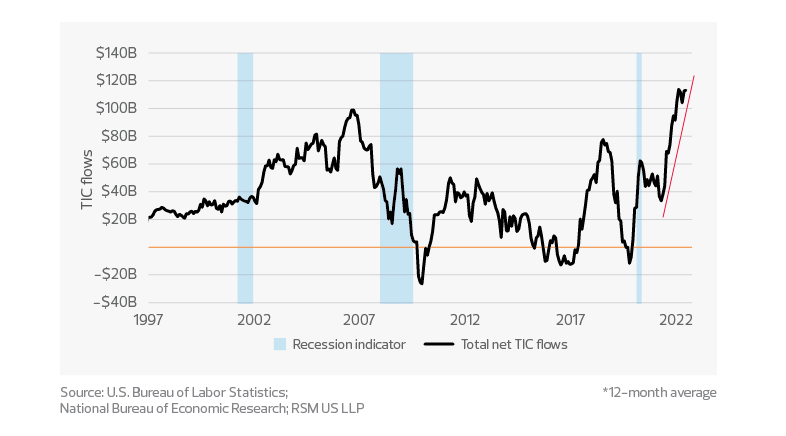 The reign of the dollar

Even with the recent runup, all signs point to continued dollar strength. The Federal Reserve raised its policy rate by another 75 basis points at its September meeting, which will further increase demand for Treasury securities. And the looming price cap on Russian oil, to be imposed on Dec. 5, will help push foreign exchange markets toward one of the bigger moves to the dollar in recent memory.

To better understand what is behind the dollar’s rise, consider three additional factors:

Transaction demand: Global trade is transacted in dollars, for many good reasons, including access to credit and the reliability of billing.

In 2020, the Bank for International Settlements reported that although the United States accounts for a quarter of global economic activity, half of all cross-border bank loans and international debt securities are denominated in U.S. dollars.

Now, limited supplies of food and energy are leading to higher costs, and these transactions are priced in dollars, which only increases the demand for dollars.

The search for higher returns: Within the global search for yield, particularly in a world dominated by real negative interest rates, international investors will look for securities that offer both a nominal return on investment and a currency return.

The demand for dollar-based investments will be determined by the positive divergence in expectations for U.S. economic growth versus its trading partners and by the divergence in interest rates as monetary policy responds to that growth.

While the consensus expects U.S. real gross domestic product growth to slow to 0.9% next year, the odds suggest that Germany’s growth will slow to negative 0.1% next year.

Safe-haven demand: Amid the global turmoil, a flight to the safety of U.S. assets is taking place. Just as U.S. investors will forgo investment in higher-risk corporate bonds during periods of economic distress, international investors will seek the safety of the guaranteed return of U.S. government securities.

Q: What's behind the dollar's strength in the middle of a wartime energy crisis? 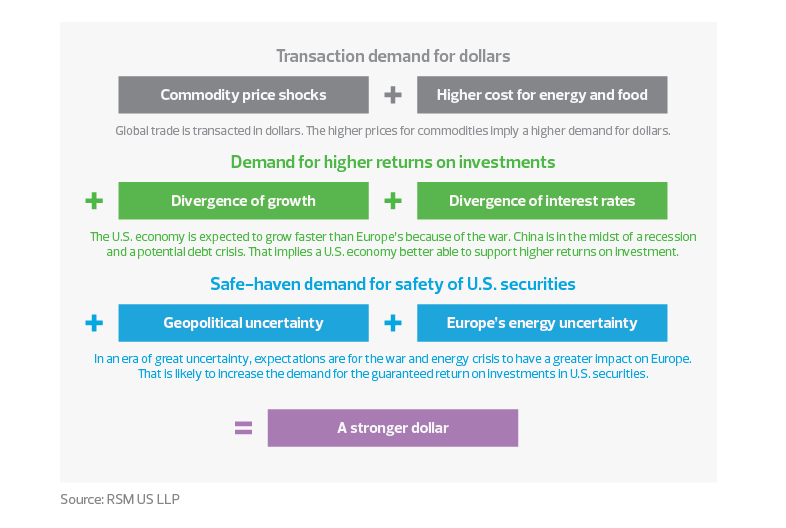 What’s behind the dollar’s strength in the middle of a wartime energy crisis?

Amid the dollar’s rise, there were bound to be calls for currency stabilization.

Indeed, on Sept. 22, the Bank of Japan began buying yen on the foreign exchange market for the first time in 24 years. The move came soon after the central bank suggested it would keep interest rates at near-zero levels.

So why is the Bank of Japan doing this now?

Japan's yen and the history of intervention in the era of a "free-floating" U.S. dollar 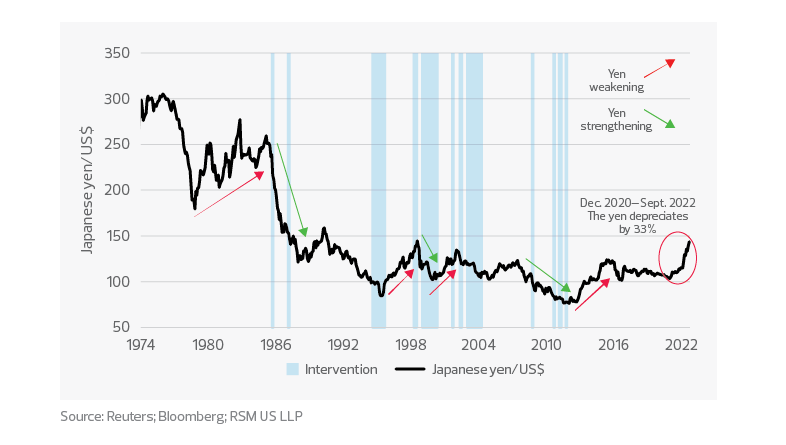 Japan’s yen and the history of intervention in the era of a “free-floating” U.S. dollar

Its intervention is almost certainly linked to elevated oil prices and the highest inflation to grip the global economy in decades.

Given the likelihood of continued dollar strength, we surmise that other central banks may be reconsidering their long-held reluctance to intervene in currency markets.

For the Bank of England, European Central Bank and Bank of Japan, coordinated intervention makes some sense. But for the Federal Reserve, it’s a far more difficult decision.

First, a stronger dollar tends to dampen inflation on the margin, which supports the Fed’s policy objective of price stability. Yet the Fed cannot dismiss the concerns of domestic exporters, which struggle as the dollar rises.

In our view, central banks and finance ministries ought to refrain from intervening in foreign exchange markets wherever and whenever possible. Intervening in markets tends to result in a misallocation of resources.

This would not be the first time such a dislocation in currency markets has occurred. In the 1980s, a perfect storm of currency weakness versus the dollar took place when U.S. monetary policy and its fiscal policy moved in the dollar’s favor.

The Federal Reserve had jacked up short-term interest rates to 18% to slow inflation, while Reagan-era government spending became expansionary.

Interest rates in the rest of the world failed to keep up, resulting in international investment flocking into U.S. assets and a rising dollar.

Despite the reluctance to disrupt market forces, the current inflation shock may outweigh policy concerns. We may be entering an era of intervention in foreign exchange markets.

Consider how dramatically the economic landscape has changed. The yen has lost 15% against the dollar since the start of the year and 36% since the end of 2020.

But perhaps even worse considering its status within Asia, Japan’s currency has weakened by 35% since May 2020 versus China’s renminbi. 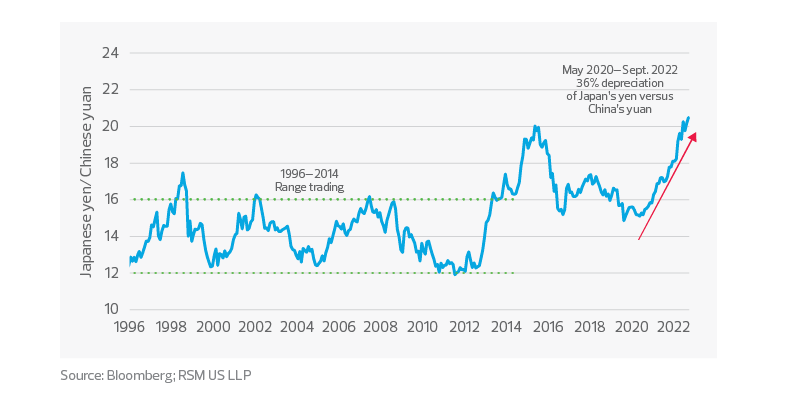 Do we need another Plaza Accord to stop the dollar from moving higher against the yen? And given past experience, why would the U.S. even consider another round of currency intervention?

Let’s start with the second question, which might be more about mutual protection than anything else.

The currency forecaster Michael Rosenberg argues that recent calls for intervention might be a function of protecting Japan’s status in Asia as much as protecting its economy from currency-induced inflation.

If Japan’s economy needs a lifeline, there are many reasons for the United States to provide one. Japan is a steadfast ally, a major trading partner and a willing investor in the U.S. economy.

In recent decades, however, Japan was surpassed by other Asian nations in manufacturing and technology.

We have to assume that Japan’s diminished role in Asia is in large part because of China’s economic ascension and its investment in neighboring economies.

One result has been a breakout of the renminbi versus the yen following the 2008-09 global financial crisis, and then the rapid 36% depreciation of the yen versus the renminbi starting in May 2020.

If the rise of the dollar versus the yen might be ancillary to Japan’s other issues, that brings us back to the first question: Why would an intervention be needed now?

After all, diminishing the value of the dollar to save the yen would contradict efforts by the Federal Reserve to reduce U.S. inflation.

For Japan, the decrease in the yen’s value might be expected given its diminished role in international trade. The weaker yen would in many ways help Japanese industry and increase its comparative advantages.

Then there is China. The dollar increased by roughly 9% versus China’s yuan this year through the middle of September, a rise that in the past would have prompted outcry from the United States. But times have changed, and so far, the reaction to that increase from American officials has been benign.

When the developed economies were reeling from the trade war with China and the subsequent global manufacturing recession threatened a full-on recession in 2019, the renminbi weakened along with other currencies.

This current episode is eerily similar. The dollar index has been gaining momentum along with the growth of the U.S. economy and weakness in Europe.

At the same time, COVID-19 shutdowns threaten China’s economic growth. It would not be any surprise if Chinese authorities tolerate a wider band in the yuan’s value and the currency depreciates further in the near term.

Even so, the 12-month forward market is pricing in less than 1% appreciation of the yuan from its current level, hardly a sign of manipulation. 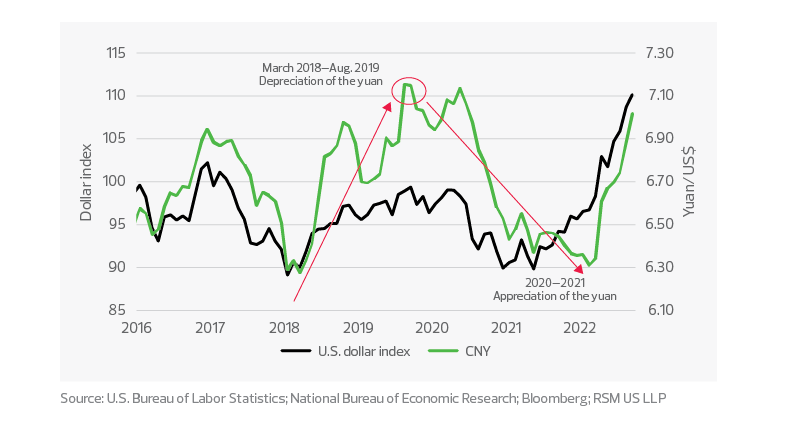