The gender parity and wealth gap

Pandemic compounds the income and wealth struggles for women

#
Labor and workforce The Real Economy

Gender parity will not be attained for another century. That forecast was posited by the World Economic Forum in its Global Gender Gap Report 2020. With March marking both Women’s History Month in the United States and International Women’s Day on the 8th, there is no better time to pull back the curtain on this sobering statistic.

The World Economic Forum study released in December 2019 found that economic participation and opportunity has only closed the gap by 57.8%, second only to political empowerment. Even more discouraging, less than half of all women globally or 47.1 as a percentage participated in the labor force, down from 51% in 1990 according to the International Labour Organization database as of the end of 2019. According to the U.S. Census Bureau’s data on 2019 median earnings—the most recent U.S. figures available—women earned 82 cents for every dollar men earned. And, this was all before the pandemic. 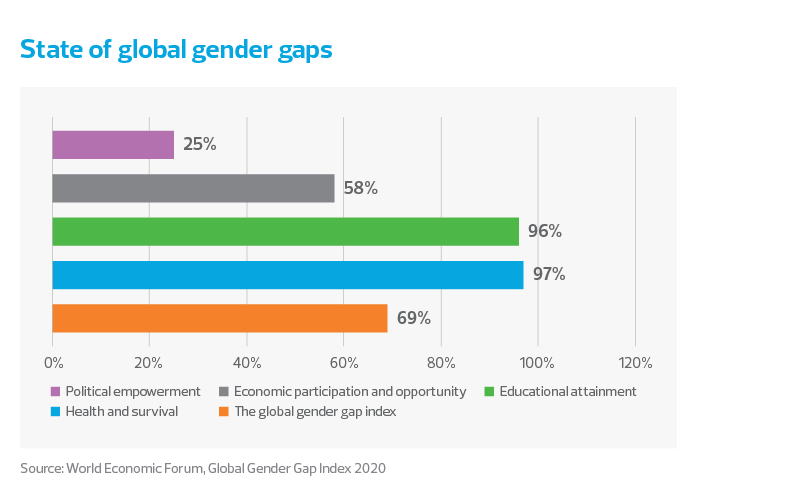 The effects of the global pandemic on women in the workplace have been staggering. According to the U.S. Bureau of Labor Statistics, there were nearly 2.2 million fewer women in the labor force in October of 2020 than in February 2020, when the outbreak began. Women were hit hard for several reasons. First, they are more likely than men to work in a service occupation such as retail, tourism and hospitality, or restaurants, all among those industries suffering from government stay-at-home orders. Second, many in-person occupations deemed essential, such as health care and social work, are predominantly held by women, often with no telecommuting options available. These are also fields that frequently put workers’ health and safety at risk.

The effects of the global pandemic on women in the workplace have been staggering, in part due to disproportionate numbers of female workers in the hard-hit service industry.

Some women have made the decision to leave their positions for fear of exposure and complications to their own preexisting health conditions. Finally, women with children bore the brunt of childcare and homeschooling, according to a July 2020 study by Caitlyn Collins, assistant professor of sociology at Washington University. The reduction of women’s work hours during the pandemic, due to childcare and other concerns, will likely intensify existing gender challenges in the future, including professional opportunities, networking, promotions and raises. Simply put, women on average are already making less than their full-time equivalent male coworkers and are now earning even less through reduced work hours and leaving the workforce either by choice or layoff.

Surprisingly, when childcare responsibilities are factored out of the equation, the wealth gap between women and men remains staggering. The largest gap, in fact, is between women who never married and men who never married, according to a research study from the Federal Reserve Bank of St. Louis. The data from the bank’s triennial consumer study, analyzed by economists Ana Hernandez Kent and Lowell R. Ricketts, found that women who never married obtained 34 cents of wealth for every dollar held by men. After weighing various control factors such as age, education, home ownership and employment, the gap decreased; however, women still only had 71 cents of wealth for every dollar held by men. The income gap is often explored, but the wealth gap may take even longer to close. Having a large part of an economy not able to participate in that economy from lack of wealth creates a burden for all.

In order for the economy—and society as a whole—to thrive, we need diversity in talent and representation in order to create an environment where both men and women can succeed. We must also equip the younger generation with the skills necessary for the job market of the future. These skills lead to opportunities, leadership and an eventual closing of the gender parity gap, making way for wealth equity as well. Though these goals will take time, business leaders have the opportunity now to make progress, accelerate opportunities and provide a more equitable working environment: