The federal tax cuts of 2017 and regulatory changes have benefited middle market businesses, but the trade war with China is taking its toll, according to a recent survey of executives conducted by RSM. Still, the economy remains strong enough that hiring skilled workers remains a major concern among these executives.

The findings are part of The RSM US Middle Market Business Index survey, a quarterly poll of 403 middle-market business executives who offered their views on the economy and how it is affecting their organizations. The report is produced in conjunction with the U.S. Chamber of Commerce.

The third-quarter MMBI results reflect sometimes conflicting sentiments toward the current administration’s signature economic policies of tax cuts, regulatory relief and the aggressive use of tariffs to curb trade imbalances.

“The United States’ volatile trade policy has left a longstanding uncertainty tax hanging over the domestic economy, and it is clearly reflected in the concerns that middle market executives have voiced in our MMBI survey, where tariffs remain their top concern,” said Joe Brusuelas, RSM US chief economist. “As we head into the 2020 election cycle and the end of the current business cycle, it is imperative that policymakers work to stabilize trade relations.” 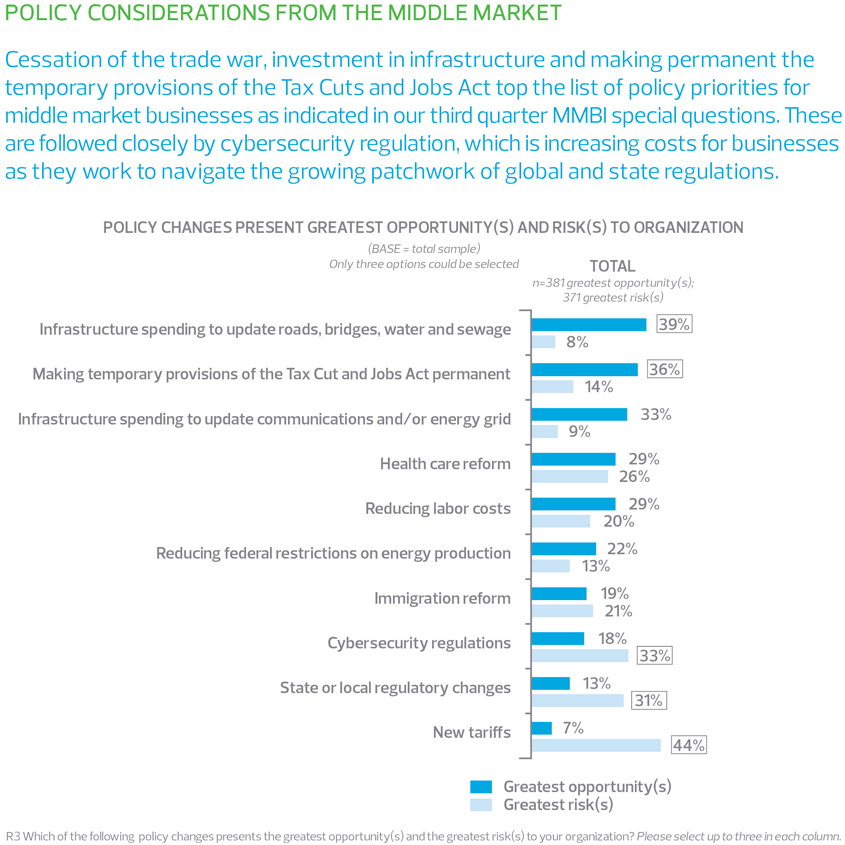 The issues and policy actions that generated the most concern over the past 12 months included:

The policy actions that benefited their businesses the most over the past 12 months included:

While the impact of the federal tax cuts in 2017 received similar ratings among both larger and smaller middle market organizations, larger companies were more likely than smaller ones to report that they benefited from other policy actions. For example, 32% of companies with annual revenues between $50 million to $1 billion reported gains from the easing of federal regulations, while that rate was 14% in companies with annual revenues from $10 million to $50 million. When the questions focused on the next 12 months, the survey reported similar sentiment.

The survey found a range of opinions when executives were asked what they saw as the areas of greatest opportunity:

“While middle market leaders have many areas of concern, there are a few bright spots,” said Sara Webber Laczo, principal and corporate communications leader for RSM. “Infrastructure has been a top policy consideration for the middle market since January 2017. Businesses not only see opportunities to increase the efficiency of their operations through infrastructure improvements, but also want to participate in rebuilding our country.”

There was a similar range of opinions when asked about threats to their business:

Perhaps because of these concerns, 38% of middle market executives reported an increase in the level of interaction they have had with state policymakers or political representatives over the past 12 months. And about a third reported an increase in their level of interaction with local and federal government representatives (34% and 29%, respectively).

Overall, sentiment about the economy eased in the third quarter, as the Middle Market Business Index declined, to 129.4, down from 132.3 in the third quarter, and below the recent peak of 136.7 in the first quarter of 2018. The decline is in line directional declines in the expected growth of revenues, capital investments and hiring.