SPACs and direct listings are reshaping the capital markets

The volume and dollar value of public listings went on a tear last year as private companies took advantage of a bullish stock market to raise cash at attractive valuations.

Activity in January indicates that this momentum has carried over into the new year with three methods of going public — special purpose acquisition companies, direct listings and traditional initial public offerings — showing signs of a strong opening quarter and the potential for another stellar year.

SPACs were the buzz of 2020, a record-breaking year, and are off to a quick start this year with January being the best-ever month for new SPAC listings. The continuing interest in SPACs has been supported by a rising stock market, which has delivered spectacular gains for early investors in new SPAC offerings. 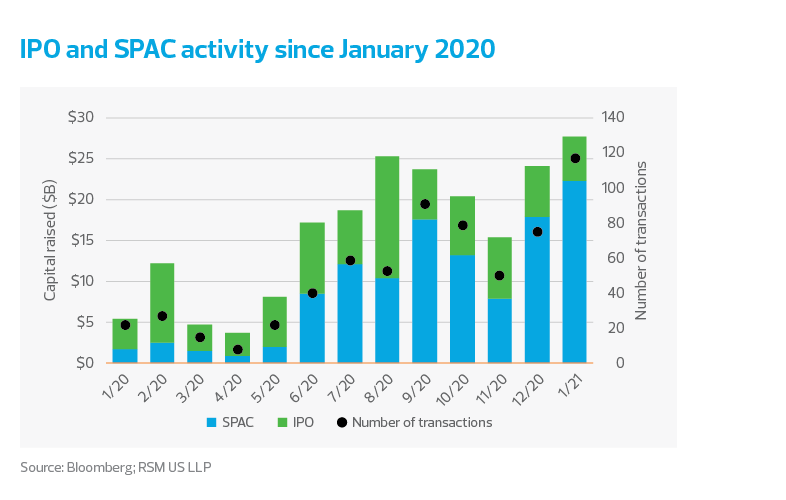 A SPAC essentially flips the traditional IPO process on its ear, by first creating the shell company, then going out and finding acquisitions to fill out its portfolio. SPAC investors bet on the skill and talent of the SPAC management team and the likelihood that the managers will identify a suitable target company within a two-year time frame. SPACs are likely to continue to generate interest for as long as the market performs well.

All of these bets have the ability to do well both in a rising stock market and when market expectations for the post-merger success of the target companies are elevated. Consider the electric vehicle industry. The stock market performance of electric vehicle manufacturers, or their suppliers, has spurred investors to search for the next startup to deliver the outsized returns that Tesla delivered in 2020. Moreover, this industry has a favorable long-term outlook as a more environmentally friendly administration transitions into government and the focus on renewable energy grows.

SPACs are likely to continue to generate interest for as long as the market performs well and the appetite for the next big thing detracts investors’ attention from some of the rising risks of each additional dollar of SPAC dry powder accumulated.

As more SPACs are launched, competition to find targets is heating up, raising the possibility of SPACs overstretching to secure targets or, in some cases, failing to complete the merger within the prescribed time frame.

With competition to secure suitable targets intensifying, SPACs have been moving down the maturity ladder in search of companies to acquire.

The expectation for the market to continue to be receptive to SPACs taking early-stage companies public remains to be tested. Public equity markets can be shortsighted when it comes to evaluating performance from one quarter to another.

As an increasing number of less-mature companies are brought to the public markets through a merger with SPACs, it remains to be seen how patient investors will be in allowing these early-stage companies to develop their products, grow their revenues and achieve profitability. A bout of stock market panic and volatility could put this to the test, and it may not be long in coming, with some pockets of the stock market starting to exhibit signs of froth.

Direct listings have been little used as an avenue for going public. Before 2020, the only notable companies that took this route were Spotify and Slack. Interest in this option increased in late 2019 following soured investor sentiment due to poor performance of a number of mega-IPO deals. Investors and venture capital-backed companies began to seriously deliberate the possibility of using direct listings as an exit route, but the mechanics of this alternative rendered it an avenue only open to a limited few.

Under a new rule, a company in a direct listing will be able to issue new shares on the first day of trading.

In its current form, a direct listing results in existing shares being listed on the public markets with no additional capital raised. Mature private companies with ample capital or with steady cash flows and no immediate need to raise cash may find this route preferable as a means to offer investors liquidity. The majority of venture capital-backed companies do, in fact, need the cash and go public in order to tap the public markets for additional capital.

A direct listing also has less involvement by investment banks and does not have similar restriction periods for the trading of shares by existing stockholders in the immediate aftermath of the public listing. For lesser-known companies, this lack of support by an underwriter and lack of trading restrictions can make for volatile share price performance.

Direct listings attracted greater attention in 2020 following the high-profile direct listings of Palantir and Asana at the end of the third quarter. But what will make them more compelling in the future are new rules proposed by the New York Stock Exchange that will change the direct listing from being not only a liquidity event for existing shareholders, but also a way to raise capital.

In December, the Securities and Exchange Commission approved the NYSE’s proposal for a new direct listing process in which a company will be able to issue new shares in the opening auction on the first day of trading and sell directly to the public.

This change, which lifts the previous impediment of not being able to raise new capital upon listing, should raise the popularity of this route as a viable option for more companies looking to go public.

News of Roblox and the cryptocurrency trading platform Coinbase planning to go public via direct listing has already brought forward two high-profile candidates that are pursuing this option to add to the slowly growing list of mature companies opting for this route. This will most likely not be the last to be announced this year. We expect more to come.

The traditional IPO will remain an important way for companies to raise capital, even as the proponents of SPACs and direct listings assail the traditional process. The IPO remains an avenue accessible to all companies looking to go public and has endured through changing market cycles.

Similar to SPACs, the strong end to 2020 seems to have rolled into this year with an impressive lineup of companies expected to drop in 2021. Last year ended with Airbnb and DoorDash arriving to the public markets through the traditional IPO and seeing substantial pops during their first days of trading. While these IPO pops may stir companies to consider the alternative options for listing in fear of leaving a lot of money on the table, we expect a good number of the highly anticipated IPOs for 2021 will still pursue the traditional IPO route.

This year has already seen the arrival of Affirm (AFRM), Petco (WOOF), Poshmark (POSH) and Ortho Clinical Diagnostics (OCDX). Large names in the IPO registration pipeline include the social media platform Bumble, the webinar and virtual event platform ON24 and the robotic process automation company UIPath.

A number of life sciences companies have also filed for IPOs in January. Beyond this, other household names, including Robinhood and Instacart, are said to be preparing to file for an IPO this year.

The landscape in public markets is continually changing. Here is what to expect for the three methods of raising capital: