Initial public offerings of special purpose acquisition companies (SPACs) have almost ground to a halt, a rapid and spectacular reversal of one of the hottest trends in 2020 and the first quarter of 2021. SPACs’ share price performance—as reflected by the Defiance Next Gen SPAC Derived Exchange-Traded Fund, which consists of hundreds of SPACs at various stages of the investment cycle—dipped on May 13 to its lowest level since the fund debuted Oct. 1, leaving questions in place of the buzz.

Now that the SPAC boom and its mid-February crest are behind us, what should we make of the current pause? How do we make sense of the slowdown? What forces will shape what happens next? 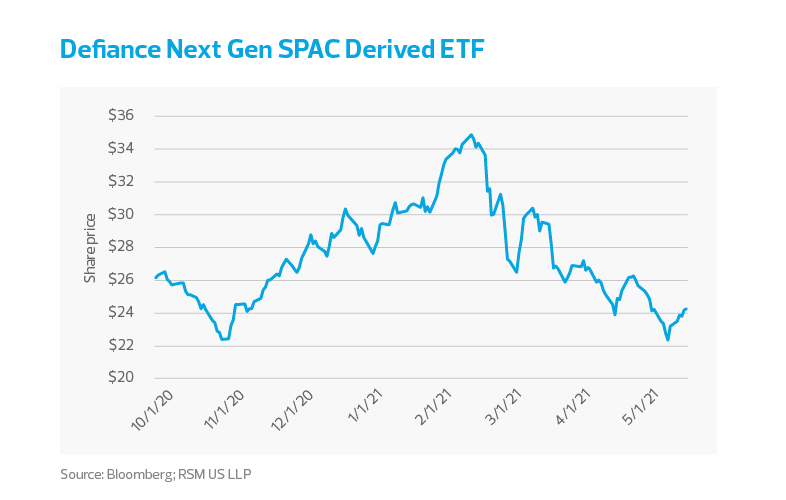 The pause in new SPAC IPOs may well turn out to be a positive for the evolution of this public listing alternative. The wintertime explosion of volume and dollar value of new SPAC IPOs may have simply run too hot to be sustainable. A steady flow of SPAC IPOs at a slower pace—one that matches the supply of private companies that are suitable targets to merge with a SPAC—may be good for rebalancing the market. Some enhanced regulatory scrutiny may also bring about investor protections and an alignment of interest with SPAC sponsors that could enable both retail and institutional investors to invest in SPACs with more confidence in the long run.

A steady flow of SPAC IPOs at a slower pace—one that matches the supply of private companies that are suitable targets to merge with a SPAC—may be good for rebalancing the market.

To be clear, SPACs are unlikely to disappear from capital markets despite the recent setbacks and some headwinds in the future. With more than 400 active SPACs looking for targets after the fundraising frenzy of 2020 and first quarter of this year, there is plenty of dry powder—about $178 billion as of mid-April, according to IHS Markit—looking to close deals before the 18-to-24-month deadline by which a SPAC has to complete a reverse merger with a private company to make it public.

Existing SPACs continue to announce merger transactions, although there are some indications that the soured sentiment may have slowed the pace and tempered the ease of locking down financing from private investment in public equity (PIPE). PIPE deals inject more capital in these so-called de-SPAC transactions in order to facilitate the acquisition of targets valued at price tags even larger than the cash raised from the SPAC IPO and to inject cash into the operating business.

Meanwhile, the future of SPAC IPOs is less clear. While several drivers have dampened interest in the current environment, the threat of more regulatory scrutiny might have relatively long-lasting effects.

The Securities and Exchange Commission (SEC) fired a warning shot on April 12 when it clarified how to interpret guidance about how SPACs account for warrants, a key feature of how SPACs incentivize and attract initial investors. The new treatment may require that warrants be recognized as liabilities instead of a component of equity, although fewer firms appear to be impacted than initially expected. The resulting accounting issues are not necessarily difficult to overcome, but they can be time consuming.

The Securities and Exchange Commission fired a warning shot when it clarified how to interpret guidance about how SPACs account for warrants.

The change may force some existing SPACs to restate their financial statements, which generally is a negative event for a public company. It also could slow the registration of new SPACs seeking to complete an IPO, as they may need to amend existing filings before their registration statements can be declared effective by the SEC. The warrant accounting change does not have any direct impact on the economics or cash flows of the investment vehicle and therefore is likely not the sole contributor to the slowed pace of SPAC IPOs.

The SEC also has vocalized its concerns pertaining to certain features of the de-SPAC transaction, specifically the practice of presenting forward-looking statements to entice investors to vote in favor of the merger transaction.

John Coates, the acting director of the SEC’s Division of Corporation Finance, released a statement April 8 arguing that the de-SPAC transaction is, in fact, the transaction by which the target company goes public and, as such, may be viewed as its IPO. In the traditional IPO process, presenting forward-looking projections is prohibited. Coates’ statement portends possible regulation concerning permissible use of financial projections and potential liability risk for dissemination of such information.

Aside from the SEC’s overhanging magnifying glass, the reasons for SPACs’ diminished share price performance are manifold. The drop from the mid-February peak to early March is closely connected to the drop in growth stocks, which was driven by market fears that interest rates would rise as a result of increasing expectations for inflation. In fact, the growth and tech-heavy Nasdaq Composite Index followed a similar trajectory over the same period. SPACs, by the nature of the target companies they pursue, closely resemble growth stocks.

From mid-March onward, though, SPAC stocks have continued their downward slide as retail investors’ interest retreated. Retail investors had been one of the driving forces behind the SPAC surge. Many searched for the next big startup in novel industries such as space travel, electric vehicles and other related technologies. 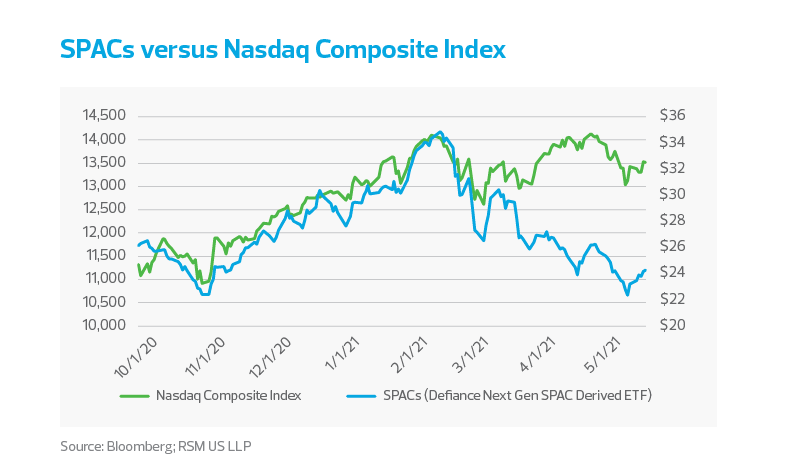 Proponents of SPACs have touted them as a vehicle for democratizing investment in startups, which traditionally has been within the purview of only venture capitalists and other deep-pocketed investors. The initial retail interest in SPACs reflected that position, aiding a rise in SPAC stock prices that at times seemed speculative. Some SPACs soared to dizzying heights on the back of little market-moving information. Even celebrities started getting in on the SPAC action. Lest retail investors be drawn to SPACs by star power instead of sound investment practices, the SEC’s Office of Investor Education and Advocacy on March 10 published an investor alert that included a boldface and italicized sentence that reads: “It is never a good idea to invest in a SPAC just because someone famous sponsors or invests in it or says it is a good investment.” 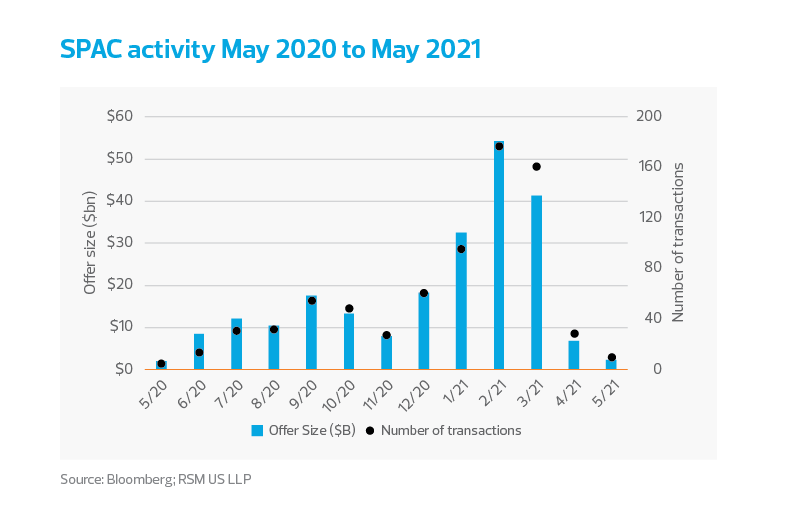 The extent to which retail investors remain interested in SPACs is just one of several factors that will determine the duration of the current pause and, beyond that, share price performance.

In general, an economic recovery over the next 16 to 24 months that supports a broad stock market rally would put investors more at ease allocating to SPACs. Retail investors that see stock prices stabilize in a growth environment could have their confidence in SPACs repaired. Then again, they also would have attractive investment alternatives.

MIDDLE MARKET INSIGHT: Investors know the SEC is watching closely and probably will take additional steps to bring order to the market and curb any speculative behavior.

As that dynamic evolves, investors will continue to question what else the SEC is going to do about SPACs. Investors know the commission is watching closely and probably will take additional steps to bring order to the market and curb any speculative behavior. We will also have to see what happens when groups get past the warrant-accounting speed bump.

Ultimately, the hope is for dollars to be deployed more thoughtfully toward worthy targets—growth companies that are more stable than speculative. If SPAC investment activity returns to the level of last June to November, it could be sustainable in the future of capital markets.