Cause for concern, or the foundation of economic renewal?

As the economy picks up steam,  concerns about a debt hangover like the one that followed the 2008 - 2009 financial crisis are proliferating.

But with American household balance sheets the strongest in decades, we see little chance of a consumer debt hangover interrupting the current expansion anytime soon.

Focusing on the ratio of debt to household wealth - as opposed to the far less useful debt-to-GDP ratio - elicits a constructive and encouraging outlook.

A close look at both household and national balance sheets indicates that this concern is somewhat overblown and misses the growth in household wealth—however inequitably distributed—over the past few decades and its ability to finance public debt and infrastructure improvement.

Focusing on the ratio of debt to household wealth—as opposed to the far less useful debt-to-GDP ratio—elicits a different, constructive and encouraging outlook.

In addition, it implies that the American economy has far more fiscal space than has traditionally been acknowledged, which contributes to the conversation on addressing long-neglected infrastructure and social needs.

Consumer credit as a percentage of gross domestic product, which is the customary way to look at household debt, has been in decline since the 2008–2009 financial crisis.

During the sluggish decade-long recovery from that crisis, households were coping with housing market losses, job losses and the decelerating growth of real personal income as the economy finished its transition from high-wage manufacturing to lower-paying service-sector employment.

The result was household deleveraging, with consumer debt as a percentage of nominal gross domestic product falling from 98% in 2008 to 74% in the months before the pandemic.

But perhaps a better way to view the accumulation of household debt is to measure it relative to household wealth. The ratio of debt to net worth is a measure of the ability of households to support the debt they have taken on.

Since the financial crisis

In the decade since the 2008–2009 financial crisis, the four-quarter average of the ratio of household debt to net worth increased to 7.75% in the first quarter of 2021, which by itself might cause some consternation.

But in the context of increased costs of education and housing—both of which are investments in household capital—a ratio of debt to net worth of less than 8% is still well below historical levels of debt.

But it is also important to note that the peculiar demographics of the United States require an increase in medical care and allocation of capital to support the retirement of the baby boomers, which will need to be financed by that increase in overall national wealth.

MIDDLE MARKET INSIGHT: In the context of increased costs of education and housing, a ratio of debt to net worth of less than 8% is still well below historical levels of debt.

In addition, household debt has increased by 24% in nominal terms compared to the second quarter of 2012, when household debt resumed its growth after the Great Recession.

But during the same period, household net worth has increased by a total of 78%. Even taking into account distributional concerns, this implies that both the household and national financial positions are far better off than generally understood—and suggests that households today are able to support current levels of debt.

In the sections that follow, we look in more detail at household debt and accumulation of wealth. 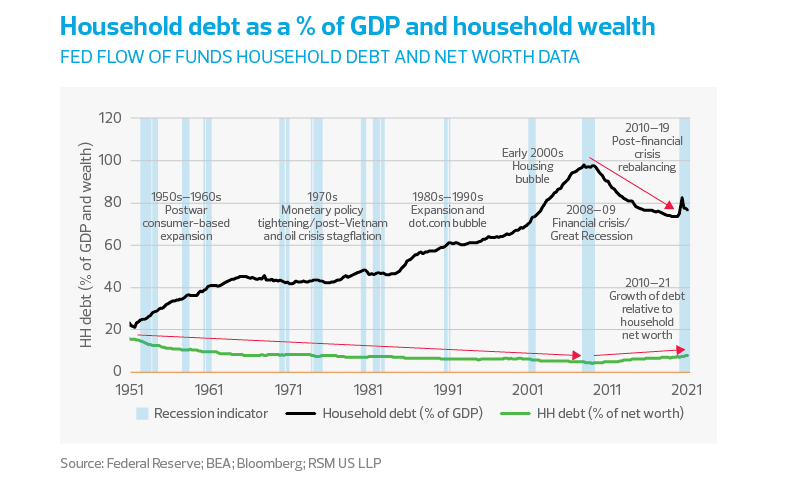 Household debt declined during the 1950s and 1960s compared to the immediate postwar era of education and housing loans. It increased during the dreary 1970s and then again in the booming 1990s as credit card use became a way of life and as the economy experienced strong growth during the initial phase of the technology revolution.

But the growth of household debt collapsed after the housing bubble turned into the financial crisis of 2008–2009, recovering somewhat in its aftermath but at substantially lower rates of accumulation. 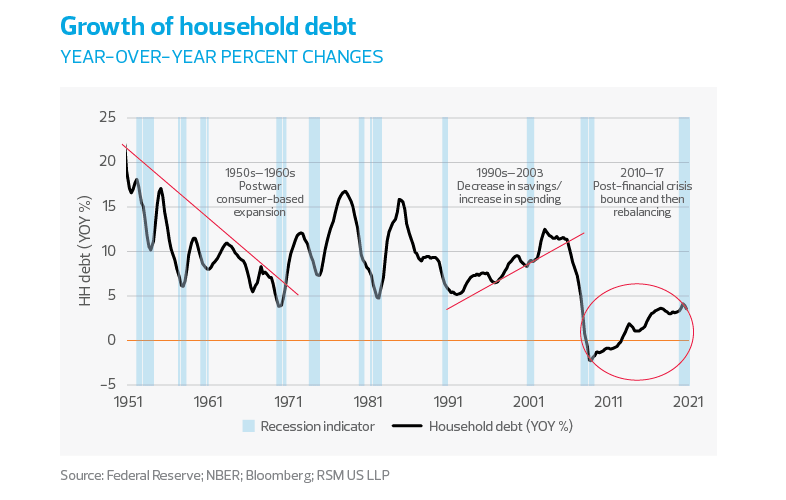 One would expect household wealth to exhibit long-term patterns of growth based on the demand for labor and—as we’ve seen in the past four decades—the availability of alternate supplies of low-paid labor.

As our analysis shows, household wealth increased on trend during the 1950s until 1980, when labor representation lost its ability to influence wage growth. From the 1980s on, household wealth accumulation slowed, with the exception of productivity gains during the five-year technology boom of the late 1990s.

In the run-up to the pandemic, the growth of household net worth was already in decline during the global manufacturing recession. Recent increases in net worth have coincided with government programs to maintain household income. We expect wealth accumulation to return to normal patterns as the economy reopens and government injections of income end. 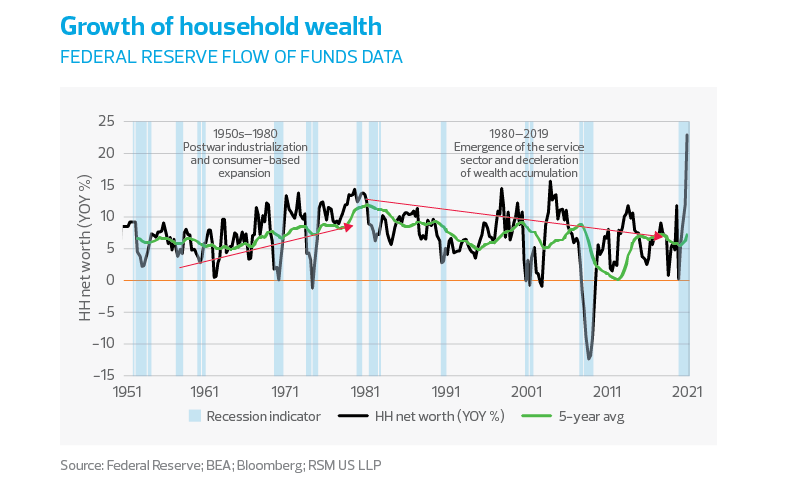 Household debt as a percentage of wealth

The last time the ratio of debt to net worth was as high as 7% was in 1987, in the middle of a 15-year period of declining wealth accumulation when labor representation was fast losing ground. By 1987, the baby boomers were well into adulthood, going into debt to buy houses and everything that goes into them.

Several decades later—accompanied by higher housing and education costs, the need to finance retirement and the changing nature of employment opportunities around technology and life sciences—the next generation is doing the same thing. 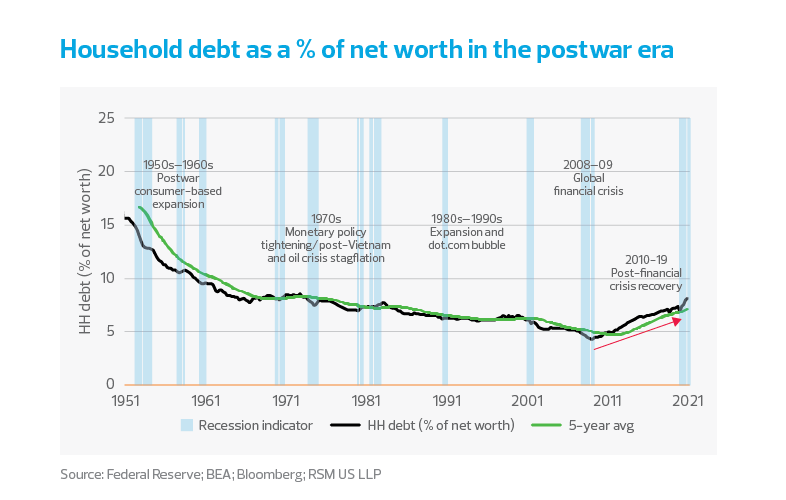 Normally, households take on more debt as they enter adulthood, with expectations of financing that debt with increasing income throughout their productive years.

After the pandemic, the likelihood of households suddenly taking on unsustainable levels of debt seems remote. Instead, there is a large basket of pandemic savings that higher-income households can draw from while households at lower levels of income continue to spend what’s available on necessities.

MIDDLE MARKET INSIGHT: There is a large basket of pandemic savings that higher-income households can draw from while households at lower levels of income continue to spend what’s available on necessities.

We would argue that the increase in debt accumulation over the past 10 years is not cause for alarm. Rather, the current level of wealth suggests the ability to tackle both the overhaul of the nation’s infrastructure and the inequality of wealth accumulation.

We have the means and the ability to build the infrastructure necessary for the new economy, to promote digital-age manufacturing, and to address inequalities of wealth accumulation and access to capital.

The Real Economy Blog was developed to provide timely economic insights about the middle market economy. It is offered as a complement to RSM’s macroeconomic thought leadership, including The Real Economy monthly publication and the proprietary RSM US Middle Market Business Index (MMBI).

The voice of the middle market

Middle market organizations, which make up the “real economy,” are too big to be small and too small to be big. They have distinct challenges and opportunities around resources, labor, technology, innovation, regulation and more.