The war in Ukraine, the cutoff of Russian exports and the possible removal of roughly 4.3 million barrels of crude from U.S. and European markets are likely to harm household balance sheets.

Should the conflict continue, we expect it will result in price increases for everything from rare metals to crude oil, with the former affecting the cost of electronics and the latter likely to have an indirect effect on the cost of most other products.

As history has shown, steep price increases can lead to changes in consumer taste and behavior and result in self-rationing among households.

In the 1970s, your parents traded in that gas-guzzling car for a fuel-efficient import. These days that shift is happening with electric vehicles. But it’s not there yet, and since demand for energy and transportation is inelastic, corporations and the federal government will have to mitigate the price shock that households are experiencing.

We expect consumer behavior to facilitate a quicker pace of change in the energy sector and reshape domestic auto production.

The price of crude oil has surged since the invasion began. The removal of Russian exports from the market and the nonresponse of OPEC producers are likely to push the Brent crude benchmark higher.

If Russia continues to be ostracized from markets in the West, there is the potential for gasoline to reach $6 per gallon in the higher-cost Northeast and West Coast urban centers.

But without price controls—used during World War II and the oil embargoes of the 1970s and 1980s—commodity prices will be determined by the global market.

As we have learned during the recovery from the pandemic, it’s not all that easy for producers to simply restart wells turned off when the drop in demand in 2020 sent the price of West Texas Intermediate crude to less than $17 per barrel. And over the longer term, the investment community faces growing pressure to stay away from fossil fuels. 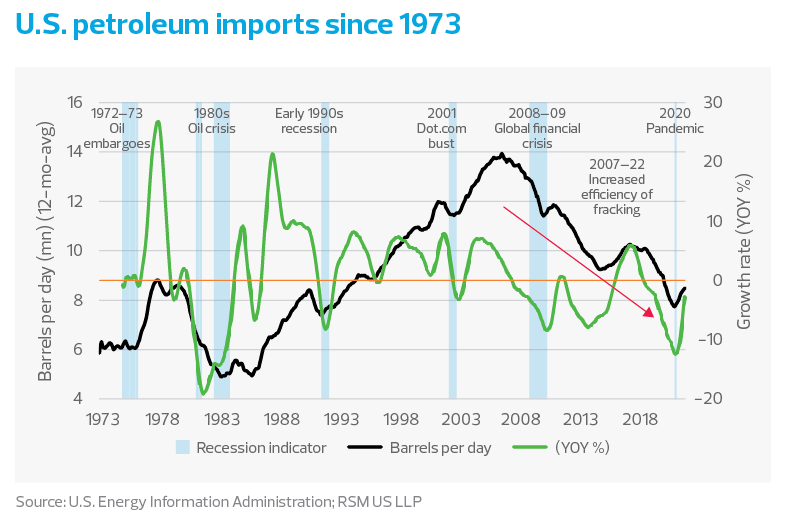 There is precedent for oil producers to be concerned about their industry’s strength and staying power. Fuel efficiency standards for new vehicles were imposed in 1975, largely in response to the 1973 oil embargo.

A report by the Union of Concerned Scientists found that sound fuel-economy policy and good engineering “can deliver the cleaner and more fuel-efficient cars, trucks and SUVs we need to help tackle our oil consumption and climate-change problems.”

The analysis also said that “investing in technologies that increase the fuel economy of America's vehicle fleet will create domestic jobs, save consumers money at the pump, cut global warming pollution and put us on a path to cut projected U.S. oil consumption in half over the next 20 years.”

Interestingly, improvements in fuel efficiency occurred even when political support for higher standards slipped. That speaks to consumer choice driving competitiveness among domestic and foreign auto manufacturers and the importance of the California market, which has set the de facto efficiency and omission standards.

When the oil embargoes hit in the 1970s, consumers rushed to the fuel efficiency of Japan’s Toyotas and Datsuns. Detroit’s gas-guzzling land yachts of earlier generations became unaffordable relics and were quickly replaced by a myriad efficient and better engineered foreign and domestic models.

We expect the energy shock to further the demand for electric vehicles. The largest-selling American model, the Ford F-150 pickup, is going electric. 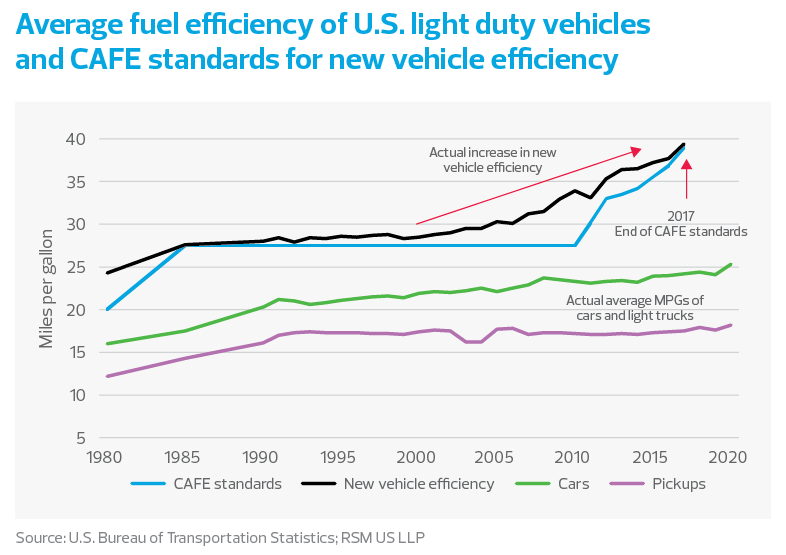 The impact of consumer choice didn’t stop at the fuel efficiency of cars. Investments in double- and triple-paned replacement windows lowered heating and air-conditioning bills and improved living conditions.

Public acceptance of decreased auto emissions ended the smog that suffocated Los Angeles in the 1980s. Same for the demise of diesel-fired furnaces in Brooklyn, all of which led to healthier and cost-saving outcomes.

We expect both increased employment and quality-of-life benefits from the diminished role of fossil fuels among developed economies. But that’s not to say the demand for fossil fuels will vanish overnight.

Rather, the fossil fuel industry will remain essential during the transition to renewable, clean alternatives. That implies that fuel prices are unlikely to go down, with supplies limited to the few low-cost producers, like the Saudis and the Russians.

The price of crude oil has spiked and there are reports of supply chain slowdowns because of the conflict in Ukraine. We expect further shortages of energy in Europe to affect the price of oil in the United States and expect further transportation delays to increase the cost of all goods along the global supply chain. These price increases should provide consumers with the incentive to adjust both their propensity to spend and their buying habits in the months ahead.

But the ability to choose depends on socioeconomic factors, ranging from household income to where you live. For instance, spending in a low-income household is limited to buying food, paying rent and transportation, and little else. When the cost of commuting to work increases, spending choices are further limited.

In effect, inflation becomes a tax on all households. But the burden of supply chain bottlenecks and product shortages will fall mainly on low-income families with limited discretionary income.

This relationship was clearly the case in the 1960s and well into the 1990s. After that, inflation was squeezed out of the economy, first by Paul Volcker’s monetary policy and the worldwide recession that followed, and then by the availability of cheap goods manufactured along the global supply chain. By the 1990s, austerity had become politically fashionable even as employment opportunities were whisked away, and poverty was growing.

Since 2015 and the peak of the business cycle, the relationship between increased inflation and changes in the poverty level has been restored, with the latest bout of inflation corresponding with a rise in the number of families in distress.

While allowing that public assistance to expire might have been excusable for the large segment of the population that was able to go back to work, the proven effect of direct financial aid in reducing child poverty and hunger needs to be reconsidered during what could be a double-dip crisis of the early 2020s. 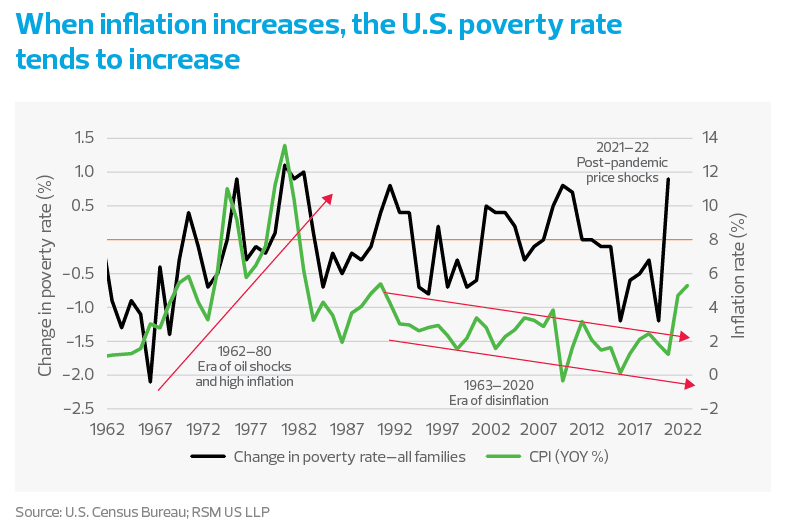 We expect inflation to increase as Russia’s oil and natural gas are removed from energy markets. Increases in energy prices become a tax on households, restricting their spending and creating a drag on economic activity.

We also recommend a fiscal response to higher prices for energy and food by restoring some aspects of the pandemic’s emergency income support. Extending the child tax credit would maintain household spending on essential goods while promoting economic growth.

Because of the threat to household balance sheets, we expect the Federal Reserve to moderate inflation expectations through gradual increases in the federal funds rate, and through a pause in the unwinding of Fed purchases of securities for the duration of the crisis.