Despite a 3.2%  gross domestic product growth rate (real private final demand 1.3%) in the first three months of 2019, we are beginning to see data that implies the current economic recovery likely peaked in the third quarter of 2018. While identifying the exact month(s) when a business cycle starts and ends is part science and part art, our estimation is that we have a near miss for a recession this year. The probability of an end to the current business cycle is rising due to trade policy and tight monetary policy. The bond market is clearly signaling that absent a cessation of trade hostilities or a shift in monetary policy, we are now late in the business cycle.

Financial markets—and the bond market, in particular, because of its direct dependence on monetary policy and expectations for inflation and economic growth—offer information to bridge the gap between the science and art of identifying the beginning and end of a business cycle. 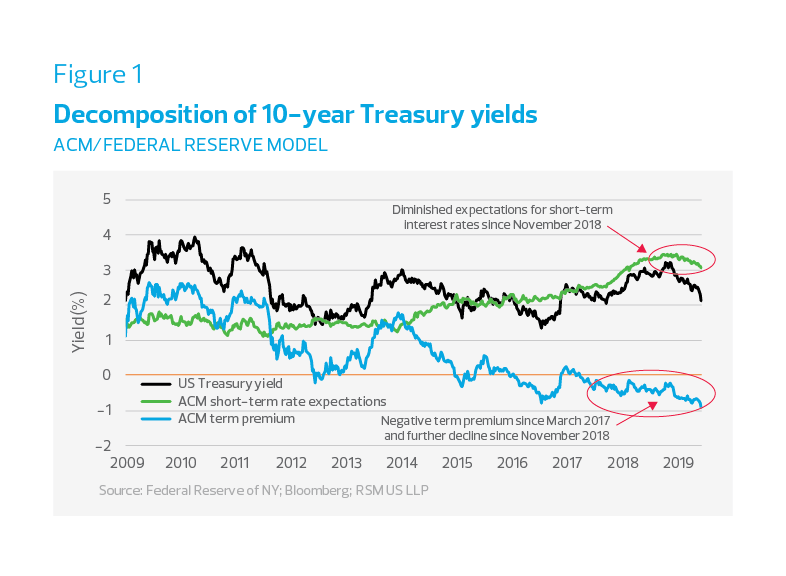 For example, the yield on 10-year Treasury bonds has been dropping steadily as anxiety over trade policy has increased in recent months, and dropped by 40 basis points from May 23 to June 3 as threats to the U.S.-Mexico supply chain increase. Movements in prices/yields along the maturity spectrum clearly imply that the policy rate is too tight given current economic activity and the proliferation of risks to the outlook. Thus, the Federal Reserve needs to shift its policy from monetary patience to easing as the outlook for global growth is further dampened at the end of a long recovery and by threats to the global supply chain. This is part of the reason why we recently changed our Federal Reserve call and now expect 25 basis point cuts from them in September and December.

Looking at the composition and behavior of long-term interest rates, we can see that the yield on 10-year Treasury bonds rose from August 2016 through October 2018. The economic recovery was continuing through its ninth year, and the Fed used the opportunity offered by extremely low unemployment rates and the prospect of rising wages to gradually push short-term interest rates higher toward what are deemed to be normal levels.

Recall that (1) Fed policy directly influences short-term interest rates (referred to as the money market) through its setting of the Fed funds rate, and (2) that investors should be indifferent about buying a series of risk-free, short-term securities or a single, long-term bond whose market price includes compensation for the risks of holding that bond until it matures. For instance, an investor could buy either a 10-year Treasury bond or a series of Treasury bills every three months over the next 10 years. But that 10-year bond would be priced to compensate the investor for the risk of holding that bond and not earning the returns guaranteed by the short-term securities if short-term interest rates were pushed up or down. The risk component of holding that bond for 10 years is called the term premium.

As shown in Figure 1, interest rates can therefore be decomposed into: (1) an expectations component, and (2) a risk component. In the case of 10-year Treasury bonds, the expectations component (the green line in Figure 1) consists of the path that short-term interest rates are expected to take over the 10-year life of the bond. The risk component, the term premium shown as the red line in Figure 1, consists of perceptions of the probability that short-term rates might deviate from their expected path. The risk is that an event will occur sometime over the life of the 10-year bond (for instance, an oil shortage, a financial crisis or a trade war) and that the Fed will respond by raising or lowering the Fed funds rate. The sum of those two components equals the yield on the 10-year bond.

In the case of the expectations component built into 10-year bond yields, shows that expectations for the future path of short-term interest rates peaked during the first week of November 2018 at 3.4%, and have steadily dropped by about 50 basis points to less than 3%. The perception of the bond market appears to be that the Fed will abandon its monetary tightening program and will instead cut the Fed funds rate in response to lower growth. 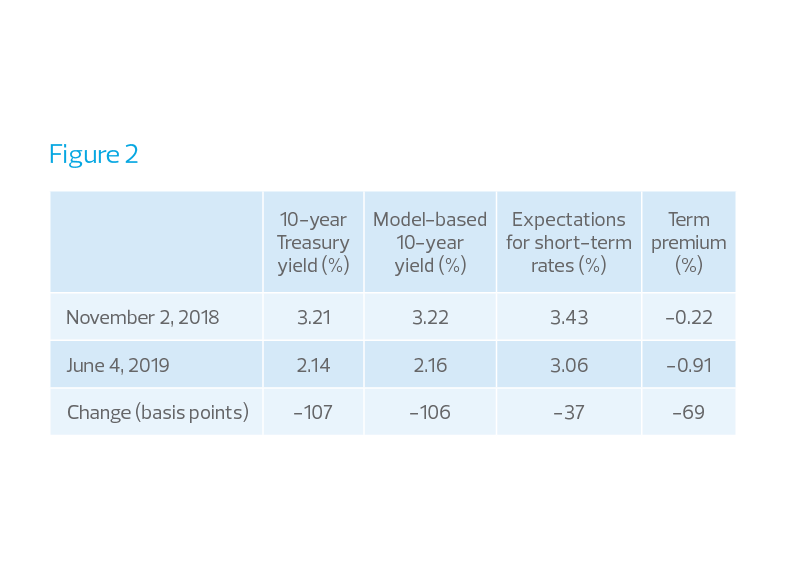 In the case of the risk component, the bond market’s judgment shows, in Figure 2, an increasing risk that Fed policy might have to become even more accommodative than expected. As it became clear that the Trump administration’s trade policy had the potential to damage the economy, the bond market reacted by pricing in potential for an economic slowdown and deflation. As such, the estimate of the term premium on 10-year bonds has fallen by 50 basis points since November 2018. Note also that the term premium has been negative since March 2017, pricing in the risk of an economic, financial or geopolitical event that could trigger a recession.

Since November 2018, yields have moved lower all along the yield curve and that the yield curve is now inverted from money market rates out to 10-year maturities. The market is now anticipating that growth and inflation in the near-term have the potential to be lower in coming months and that a revision in Fed policy will likely push short-term rates lower. 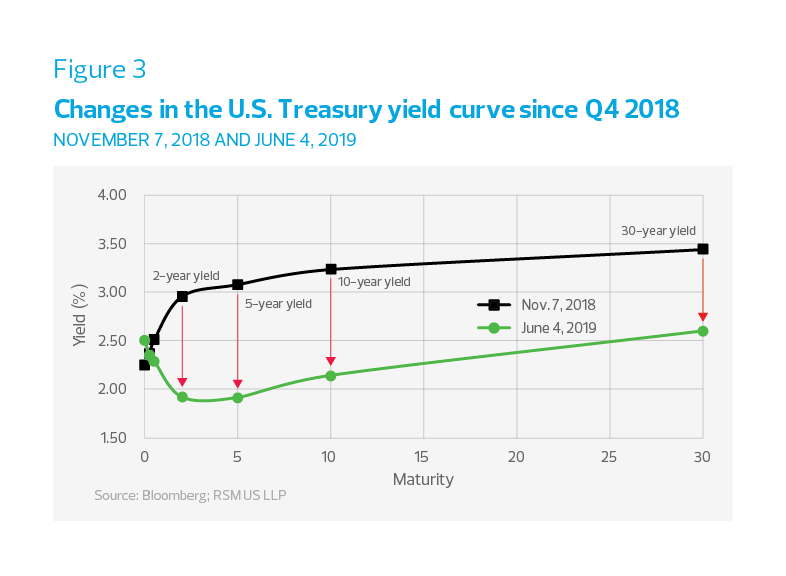 However, as with all human endeavors, that doesn’t necessarily mean that the end is near. As we noted in an earlier report, a yield curve inversion suggests a climate conducive for slipping into a recession, rather than predicting a recession in coming months. Within that climate, though, recessions are sparked by an event, and we seem to be going from one economic or geopolitical spark to another of late.

Must all good things come to an end?

The economic recovery that began during the June 2009 trough of the Great Recession is now on the eve of its 10th anniversary. Should the National Bureau of Economic Research, the final arbiter of business cycle peaks and troughs, decide that the economy is still growing through the second quarter, the current recovery will have outlasted the Dot.com Boom of 1991-2001.

What are economic indicators suggesting?

The NBER looks at various indicators and indices (including yield-curve models and monthly GDP estimates) to determine when the business cycle stopped growing and when the downturn began. The NBER’s assessment is complex even after the fact, but the financial markets are operating in real time, or as close as possible to the release of indicators that are collected and reported in the weeks or months after the economic activity has occurred.

The following is a sample of monthly economic indicators that are listed as inputs to the NBER decision process and are conventionally followed by the bond market. In each case, the indicator shows a drop-off in economic activity since the third quarter of 2018, confirmation of what the bond market has been anticipating.

Manufacturing and trade sales – economic activity included in manufacturing shipments and retail and wholesale trade sales peaked at 8.4% in May 2018 and remained strong throughout the summer. Since then, sales growth slumped to 2.1% in December before popping back up to around 3% in March and April 2019 on unexpectedly strong retail activity, all on a year-over-year basis.

Total hours worked – the labor market generally lags the business cycle; it can take a while before employers are willing to add staff at the start of an upswing, and it can also take a while, because of contractual or personal obligations, to cut back on staff when an economic recovery reaches maturity. This could be the current situation. The upward trend in total hours worked appears to have peaked at a 2.5% growth rate in May 2018 and then cooled down to 1.5% growth by May 2019, all on a year-over-year basis.

Employment growth was moving higher from Q3 2016 through the last quarter of 2018 when it hit a 2% pace. That pace has not been sustained in 2019, however, slowing to a 1% rate in April, all on a year-over-year basis.