Rapid fire sanctions: What do they mean for industrial companies?

Russia is known for its commodity exports to the world, and the short- and long-term impact of the recent sanctions on the country are not yet completely clear.

But given the wide-reaching implications of these sanctions on everything from energy and metals to airplane parts and shipping, we can reasonably expect that manufacturers and companies in the broader industrial space will need to brace for impact—if they haven’t felt it already.

What, then, will the severe sanctions placed on Russia really mean for middle market industrial businesses?
In less than two weeks, Russia became the most sanctioned country in the world. Before Feb. 22, Russia was already under 2,754 sanctions and was the second most sanctioned country after Iran. By mid-March, the number of sanctions doubled to over 6,330 and was still growing, according to a Russia Sanctions Dashboard maintained by Castellum.AI.

The U.S. Department of Commerce Bureau of Industry and Security issued controls in late February that “target Russia’s defense, aerospace, and maritime sectors and will cut off Russia’s access to vital technological inputs, [and] atrophy key sectors of its industrial base.”

These controls prohibit the sale of critical oil field parts, software, computers, telecom equipment, information security equipment and more. Businesses that sell controlled equipment or technology will need to know their end customers before selling their goods or services or risk running afoul of the export controls.

On the supply front, higher energy costs will induce longer lead times for purchasing certain energy-intensive materials as manufacturers try to cope with the increased costs. Industrial companies—along with other businesses that rely on industrial products, such as construction companies and contractors—need to assess their ability to pass these rising costs off to the end customer. In practice, organizations are inserting language in new contracts to help protect against continuing price volatility.

Most of the 4,860 new sanctions at the time of this article were targeted directly at individuals, and 519 are entities, not including a handful of vessels and aircraft. Those entities include foreign-owned Russian or Belarusian subsidiaries, businesses outside Russia and Belarus that trade directly with sanctioned and unsanctioned entities, and those indirectly affected through supplier networks. 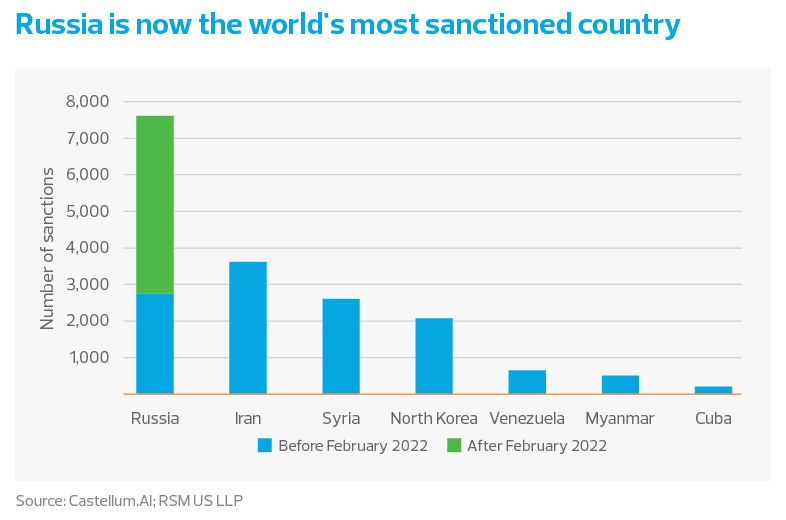 By far, the broadest impacts are the inflationary increases. The consumer price index rose further to 7.9% in February’s Bureau of Labor and Statistics report. And we expect inflation to continue rising: “The invasion and sanctions will drive inflation to an expected 10% this year, given constraints of the world energy supply, transportation costs, and a broadening of inflation into shelter and foodstuffs,” says RSM chief economist Joseph Brusuelas. 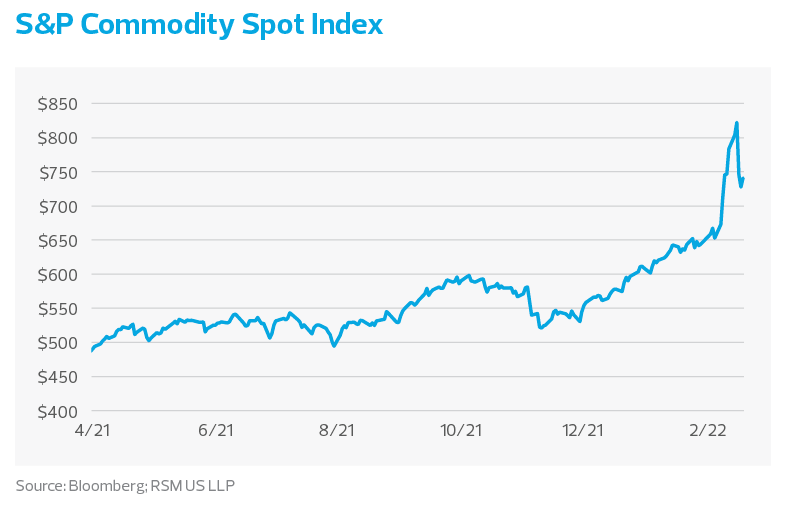 Businesses outside Russia that trade with sanctioned entities in Russia have their hands tied and can no longer legally transact. Most others are unable to trade anyway due to treasury sanctions on the SWIFT banking system, making a pullout or a pause in Russian trade a fait accompli.

There is also a reputational risk for businesses that can continue to do business in Russia. As of this writing, over 375 businesses are voting with their feet via “self-sanctions,” announcing they have or will make some sort of withdrawal from Russia. The Yale School of Management maintains an active list of companies that have left Russia and those that remain, which is becoming a list on which companies will be evaluated by public opinion. This places pressure on companies, boards and shareholders that must decide whether to still do business in Russia.

The United States decided to cease imports of all Russian energy supplies which is further driving the inflationary increases. The White House is also moving to ban all new U.S. investments in the Russian energy sector and is laying the groundwork to deny investments into any sector in Russia in the future whenever deemed necessary.

Supply networks are disrupted on several fronts from sanctions as well. Maersk, the world’s largest shipping line and vessel operator, provides Russia/Ukraine updates on shipping to and from Russia and Belarus; most of all, sea, rail and land shipping to Russia are canceled, with some exceptions for foodstuffs, medical and humanitarian supplies. For security reasons, Maersk also canceled all sea or rail routes to Ukraine.

While Russia accounts for less than 2% of global gross domestic product, it and Ukraine are essential suppliers of several base metals or nonprecious metals like iron steel, aluminum and nickel. The base metals spot price commodity index dropped in 2020 due to the pandemic, and it has been on a rally since. Russia’s invasion pushed the index beyond its already new highs. Businesses should expect to incur further increases in the near term unless demand slows and the war in Ukraine stops. 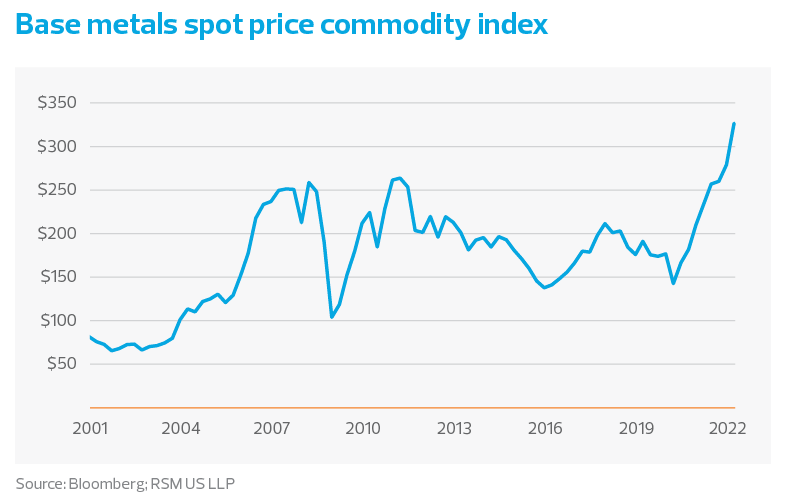 Russia is also the world’s largest exporter of palladium, a nonbase metal crucial in manufacturing automobile catalytic converters. Spot prices for this resource have risen 48% from their lowest point on Dec. 15 and are trading at $2,365 per ounce as of the writing of this article.

Another extreme example is nickel. Russia isn’t the largest producer or exporter of nickel, but the metal experienced a price increase that forced the London Metal Exchange to halt trading. The metal usually trades between $10,000 and $20,000 per ton but reached $100,000 per ton, driven by short positions from large nickel producers who expected to increase production. The invasion caused the price to rise and set off a chain reaction.

Industrial companies that rely on these metals should anticipate continued rising costs in what was an already low supply environment that escalated in response to the Russian invasion of Ukraine. Further, companies should consider alternative sources to these nonprecious metals that have been historically sourced from these countries.

The Russian currency was depreciating for years before the war in Ukraine, and sanctions sent it plummeting in early March to a new low; one U.S. dollar could buy 117 rubles. These current conditions and frozen Russian USD accounts outside of Russia have questioned the Russian companies’ and banks’ ability to meet their obligations. As such, middle market companies should assess their potential exposure if Russia defaults on its debts now or in the future.

Given that Russia is the world’s 12th largest trading partner, businesses in or close to the manufacturing space should also assess their risk and potential trade exposure, especially in deep, multilayer supply chain networks. Companies may need to diversify their critical suppliers and continuously evaluate the performance of providers and subsuppliers throughout the supply chain. With industrial companies relying heavily on third parties throughout the supply chain, visibility and connectivity across the extended ecosystem will be essential in understanding the impact from the current environment and building resiliency.