Policy choices and the prospects for middle market investment

How middle market businesses can navigate an increasingly uncertain environment

As workers continue to be in short supply, businesses will need to continue investing in labor-enhancing equipment, intellectual property and software to meet demand.

Whatever policy prescriptions are put forward during the early phase of a recession, productivity should remain a top consideration.

Policymakers will have to tread carefully as they combat increasing uncertainty while simultaneously bolstering the economy without causing further inflation.

But with the right targeted measures that encourage businesses to make productivity-enhancing investments, policymakers can help businesses position themselves for long-term success.

Today, firms are reporting lower earnings and revenues, which is leading them to dial back their fixed investments and potentially miss out on productivity gains in the future.

For the broader economy, it is all happening at an inopportune time. As confidence among businesses declines, the risk of a more severe downturn rises.

Policymakers, then, face a quandary: How can they confront declining output when the traditional methods of fiscal and monetary stimulus are not an option?

There are alternatives. One is to invest in infrastructure that boosts productivity and capacity. These investments are not inflationary, and position businesses for long-run success, especially in an economy with a chronic shortage of workers.

The second option is for policymakers to embrace the full deductibility of new business investment as well as increased support for research and development.

Both measures would boost productivity and reduce costs over the medium to long term without spurring inflation.

And the middle market is ready to make such investments.

Over the past eight quarters, our RSM US Middle Market Business Index, a survey of the nation’s leading middle market executives, showed that a majority of survey participants intended to boost investments to enhance productivity.

This view is notable because it comes from a cohort of the American economy that traditionally is slower to make these investments.

Any policies that dampen the risk appetite among medium-sized businesses would represent a significant setback for an important sector of the economy.

Encouraging these investments offers a number of benefits. First, it represents a middle ground that allows for higher interest rates to battle inflation and avoids fiscal and monetary stimulus that would otherwise fuel rising prices, all while still encouraging investment.

Second, our approach would avoid imposing undue hardship on the general public through higher-than-necessary rates of unemployment.

A 1980 National Bureau of Economic Research paper by Ben Bernanke, who would later become Federal Reserve chairman, suggested investors will postpone a project if they think they need additional information regarding its profitability.

That information may suggest abandonment of the project, or that further delay might negatively affect profitability.

Bernanke found that because uncertainty increases the value of waiting for new information, it can impede investment.

As the U.S. economy approaches the end of the business cycle, rising uncertainty among businesses over inflation, growth and policy represents a danger to fixed business investment, productivity and, ultimately, the ability of the Fed to restore price stability.

How can we measure the uncertainty factored into the decision of whether to invest? We rely on two surveys of business intentions, as well as a measure of risk priced into financial securities and a measure of policy uncertainty.

First, the RSM US Middle Market Business Index shows that after an extended period of solid revenue and profits, sentiment among executives has become aligned with the overall pessimism linked to inflation and the economy.

Even so, in the fourth-quarter MMBI survey, 38% of respondents reported increased productivity-enhancing capital expenditures during the third quarter, and 50% indicated they expected to increase those expenditures over the next six months.

Five of the regional Federal Reserve banks conduct similar surveys of manufacturing establishments regarding current activity and expectations for the next six months. While manufacturing activity has been slowing since Russia’s invasion of Ukraine, firms continue to expect continued investment in productivity-enhancing equipment.

Investment normally entails financing of debt, with uncertainty regarding the state of the economy and the ability of borrowers to service that debt factored into the cost.

After an extended period of low risk brought about by monetary policy accommodation and extremely low interest rates, the RSM US Financial Conditions Index has now fallen to two standard deviations below normal. 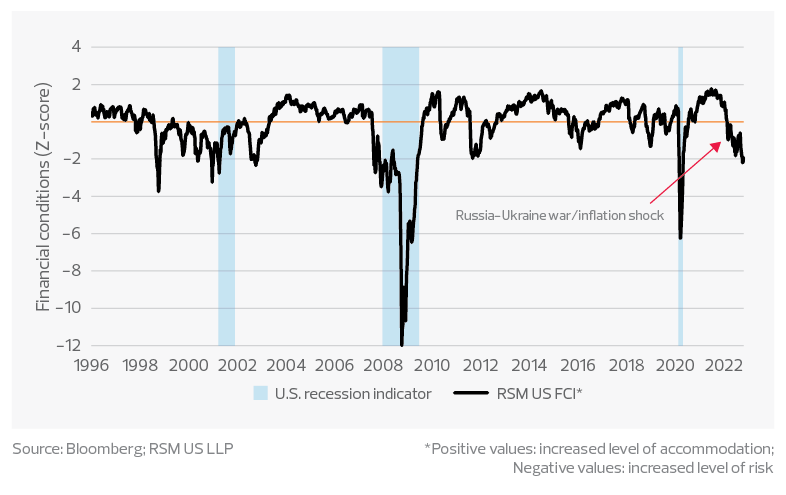 This decline indicates a significant degree of excess risk being priced into securities and a reduced propensity to borrow or to lend.

Because investment is required for economic growth, financial conditions dropping to such a low level are associated with recessionary periods.

Next, we see investor reaction to events and a building sense of the inevitability of an eventual economic slowdown as an explanation for the instability of investment over the business cycle.

Because monetary, fiscal and national security policies are determinants of economic activity, we can use the economic policy uncertainty indices devised by the economics professors Scott Ross Baker, Nick Bloom and Steven J. Davis to measure uncertainty surrounding public policy.

We show the index in two of its forms—the composite economic policy uncertainty index and the more volatile news-based index—both of which are normalized around a value of 100.

Two of the dramatic examples of U.S. policy uncertainty occurred in the past four years: the U.S.-China trade war and the pandemic. Those shocks are subsiding, but uncertainty is building once again.

This time, we attribute the increase to the oil and inflation shocks, the geopolitical risk introduced by Russia, and the prospect of a recession. 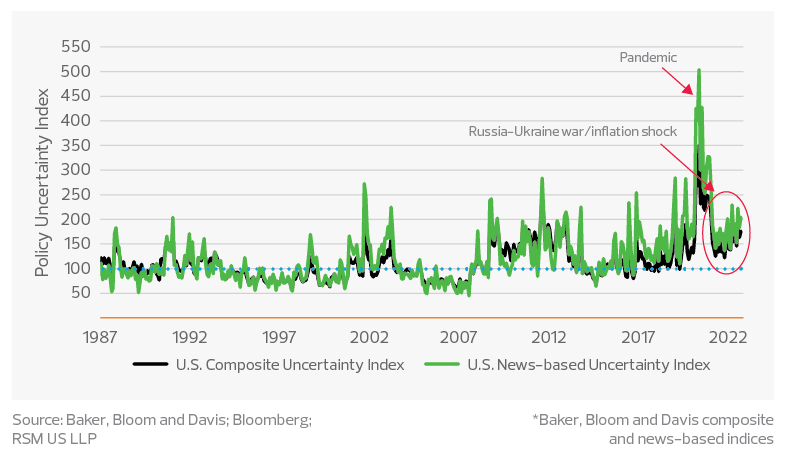 The imperfection is somewhat due to short-term fluctuations in perceptions of uncertainty, but more from the exaggerated quarter-to-quarter changes in investment that occur within a business cycle.

And as we’ve seen by the response of the financial markets to the now-abandoned U.K. budget proposals by the Truss government—an effective veto by the bond market—those policy actions can have a lasting impact on investment, growth and employment. 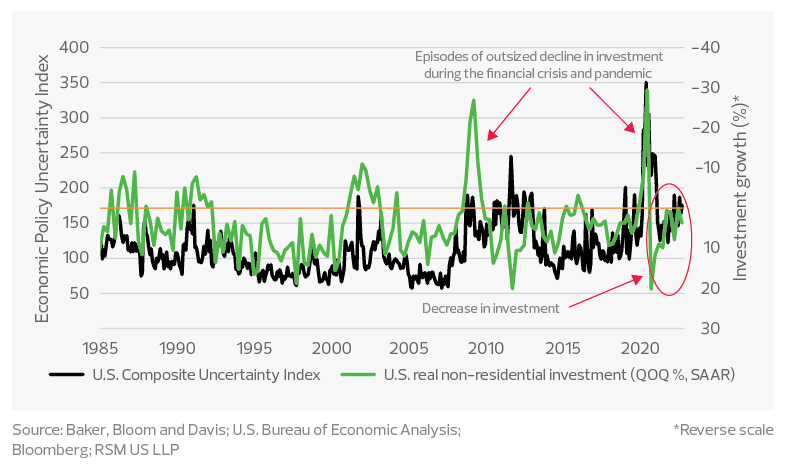 In terms of increased investment in equipment and intellectual property, we can attribute the willingness to invest in those areas to the need to remain competitive.

And because a business cycle is rarely a straight line from recession to recovery, we can offer some generalized remarks.

First, investment tends to increase along with growth as lagging information about the recovery becomes evident. Second, as the business cycle matures and growth decelerates, there will be disinclination to invest as confidence declines.

We can see the impact of the loss of confidence in the 2020-22 business cycle, with investment first increasing in response to the release of pent-up demand after the pandemic.

This was followed by the deceleration of overall growth and investment as the depth of the inflation and energy shocks became apparent.

Still, there are other factors to consider. For instance, we expect residential and commercial real estate prices and investment to decrease as interest rates rise. But despite a clear correction in the housing market in many areas, there still is a housing shortage, which will tend to keep residential investment, and prices, higher.

Second, risks around rolling over lower-cost debt that is coming due and the continuing interest in working from home are two major factors in declining investment in commercial real estate.

In the business sector, the increased cost of capital and the likelihood of an economic slowdown or outright recession next year suggest postponement or abandonment of investments. 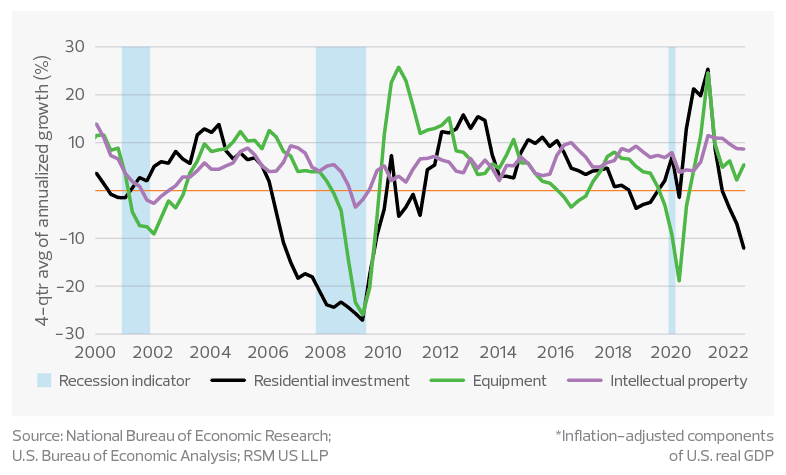 As workers continue to be in short supply, businesses will need to continue investing in labor-enhancing equipment, intellectual property and software to meet demand.

Whatever policy prescriptions are put forward during the early phase of a recession, productivity should remain a top consideration.

Policymakers will have to tread carefully as they combat increasing uncertainty while simultaneously bolstering the economy without causing further inflation. But, as we have proposed here, there are solutions.