The Federal Reserve is embarking on a new era in monetary policy, switching from its point target of 2% inflation to a target range of 1% to 3%. This change is predicated on longer-run structural changes in the economy that are inherently disinflationary, a real neutral interest rate near zero and much slower growth in the economy, all of which have reduced the trade-off between inflation and unemployment.

By adopting a flexible average inflation target, the Fed is using its most important tool—forward guidance—to infuse confidence in investors and the general public that it will do all it can to sustain the economic recovery needed in the wake of the coronavirus pandemic.

The jettisoning of a Phillips curve framework then gives the central bank several degrees more freedom to permit the economy to run hot after periods of below-potential production and consumption without the risk to the outlook from higher inflation. The crux of the shift in policy is that the Fed will allow periods of higher inflation to balance out periods of lower inflation, telling the markets and investors that it will provide additional stimulus whenever necessary to maintain self-sustaining growth.

Most important, the central bank will now err on the side of maximum sustainable employment. And when the unemployment rate approaches 4%, which we think approximates full employment, good things happen in the economy.

There will be critics on both sides of this new policy. One side will include the “inflationistas,” who are wary of runaway inflation and critical if the Fed allows prices to increase anywhere above their already-low levels (or if Congress allows any stimulus policy other than a tax break). The doubters on the other side will see the Fed pushing on a string should its more accommodative monetary stance not be applied in tandem with an even more accommodative fiscal stance that targets infrastructure spending and the social safety net.

Also keep in mind the difference between disinflation and deflation. Disinflation is the deceleration of price increases that can be the result of changes in taste or improvements in technology that reduce production costs as firms compete for market share. Deflation is the negative growth rate of prices when demand drops to levels that can no longer support a market for goods.

The drop in demand is usually the result of a shock to the economy like the loss of employment because of an economic slowdown, with the pandemic being the most recent example.

Is inflation a worry?

Let’s begin with the inflation-worriers, who can point to inflationary periods after World War I and II, the Korean War and OPEC’s oil embargoes as cause for concern. Inflation in those postwar episodes resulted from the relaxation of price controls and pent-up demand for consumer goods after years of austerity during wartime economies.

The more recent bouts of inflation during the 1970s and 1980s were the result of supply shocks when OPEC went to economic war with its client countries, pushing up the price of a good that could not be substituted at the time—fossil fuel—during the oil embargoes. What the inflationistas seem to overlook is that since the oil embargoes, inflation has been trending downward. During the 25 years from 1960 to 1984, the inflation rate during nonrecessionary months averaged 3.2%. In the 35 years since 1985, the nonrecessionary inflation rate has averaged 2.6%.

Not only did Paul Volcker’s Federal Reserve figure out how to squash runaway inflation in 1985, but the world’s central banks began to target inflation instead of the money supply, sensing a shift in economic structure that would result in a secular decline in both global inflation and in long-term interest rates. 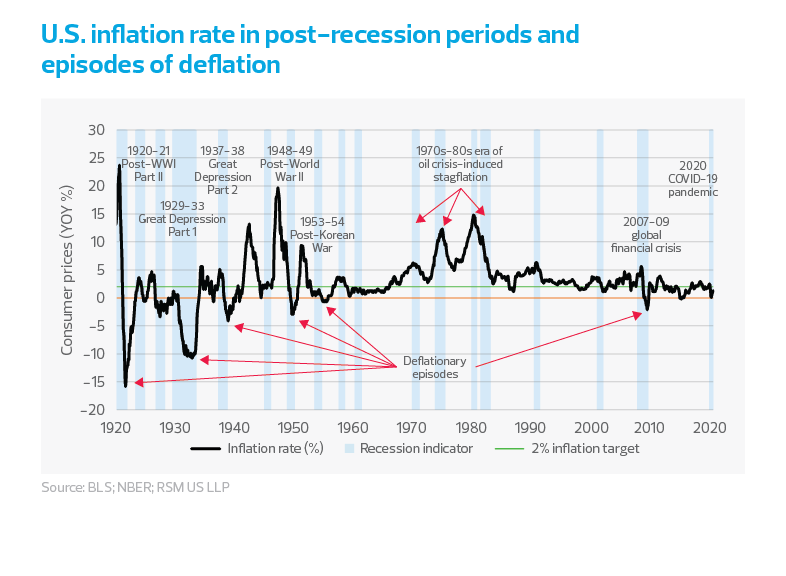 There is one more trend to consider in the wake of the pandemic. The pre-1970 recessions included periods of deflation, with the drastic drop in economic activity and employment opportunities causing consumers to both limit purchases to essentials and to postpone purchases on expectations that prices would continue to fall—resulting in a “deflationary spiral” in which prices indeed continue to fall and the economy spirals downward.

The Great Financial Crisis, or Great Recession, of this century produced 11 months of negative or abnormally low or negative inflation rates during 2009, which attested to the need for the bailout of the automobile industry and the funding of infrastructure projects to jumpstart a moribund economy. Now, because of the severe shock to the economy due to the pandemic and with inflation and interest rates so low, the economy appears more likely to fall into a deflationary spiral than to produce runaway inflation. Indeed, inflation has ranged between 0.1% and 1.6% in the past six months.

Can the Fed by itself pull the economy out of recession?

Because of the secular decline in inflation and the worldwide compression of interest rates since the 1980s, there has already been a shift in the focus of monetary policy. With inflation out of the picture, the Federal Reserve was given the leeway to be geared more toward the growth aspect of its dual mandate. 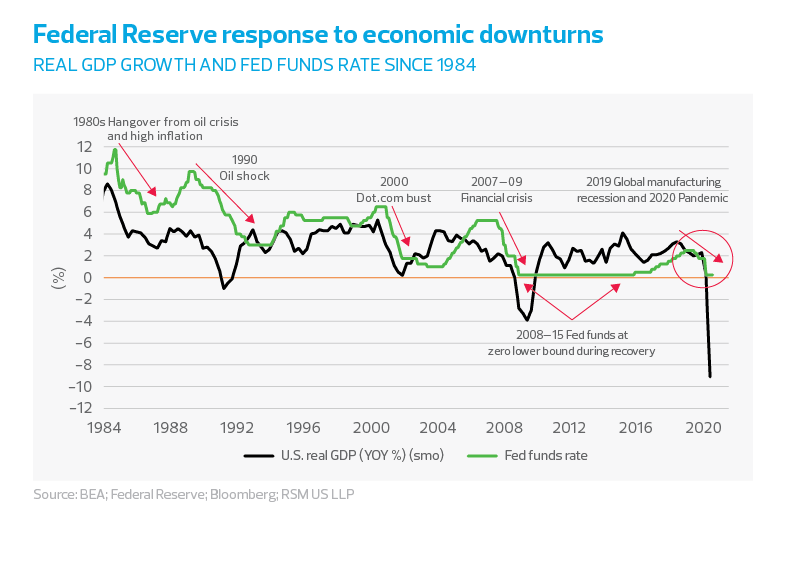 Of note, the federal funds rate was raised during the 1990s, when the dot-com era spawned mal-investment, and then again during the 2000s, when malfeasance in the mortgage sector produced an asset bubble, worthless debt and a global freeze in the financial markets.

The Fed responded by holding short-term interest rates at the zero bound during much of the decade-long recovery from the financial crisis and Great Recession, allowing for the stability and the confidence in policy needed for sustainable economic growth.

Once sustainability was reached, the Fed began normalizing interest rates by slowly raising money market rates in 2015. The economy continued to grow until U.S. trade policy was turned on its head in 2018, setting off a global manufacturing recession and the need for the Fed to revert to cuts in the federal funds rate.

And now, the pandemic has the potential to exact long-term damage to the labor force and to the economy’s potential growth. That leads us back into the other side of the argument; the doubt that monetary policy will be enough to stimulate an economy that has been damaged beyond quick repair and is in the process of being reimagined without much of the existing labor force and without existing centers of normal labor interaction.

It is doubtful that the transition to a new economic structure will be possible without the Fed facilitating the necessary financing. But it is also doubtful that an accommodative monetary policy stance alone will be sufficient.

The lesson of the recovery from the Great Recession was that a fiscal stimulus must be applied quickly and be large enough and bold enough to produce the means for transforming the economy. The de facto integration of fiscal and monetary policy is going to be necessary to address the long-term economic damage wrought by the pandemic.

While the auto industry was kept afloat after the Great Recession, the terms should have required adaptation of new technologies to prevent global climate change. (Incidentally, this transformation is under way two decades later at Tesla, General Motors and our foreign competitors).

While rebuilding roads and bridges was necessary to keep the construction industry solvent, projects to build schools, hospitals and the electric grid, and to expand broadband to every community, should have been required in order to expand the capabilities of the economy.