Rising costs of basic goods and doing business are on the margins dampening overall economic activity.

The probability of a recession is essentially a coin flip at this point, and the first quarter of next year would appear a likely point when the economy could potentially fall off a cliff.

But another oil or supply chain shock this summer could accelerate that timetable.

Gradually, then suddenly: That is how Mike Campbell, a character in Ernest Hemingway’s “The Sun Also Rises,” answered the question of how he went bankrupt.

It’s also an apt way to think about how the United States goes into a recession. While there are always signs of financial stress and diminished economic activity, at the end of business cycles, they are not always easy to discern in trying to forecast the precise month when the economy begins to contract. The American economy does not descend into a recession in a gradual and orderly fashion; it tends to fall off a cliff.

The supply, demand and energy shocks cascading through the American economy are sufficient to cause an end to the business cycle over the next six months. Based on recent economic data, the Federal Reserve’s efforts to restore price stability, and the ensuing tightening financial conditions, we think there is a roughly 45% probability of a recession in the next 12 months. That probability essentially implies a coin flip in whether there is a recession or not in the near term.

45% probability of recession in the next 12 months*

To be clear, the economy is not currently in recession. Roughly $2.5 trillion in excess savings, a robust labor market, and strong, fixed business investment continue to bolster an economy that is growing. But rising retail inventories and soaring domestic costs are impeding the ability of firms and households to sustain that growth. For this reason, we have revised down our forecast for growth for this year to 1.5%, with the risk of a slower pace.

In addition, a potent mix of domestic economic developments and international geopolitical tensions have created the conditions in which one more shock—be it from the oil market or supply chain disruptions—will be sufficient to knock the economy off its current knife’s edge into a recession.

The economy during the first half of the year reflected the powerful toll of inflation. Weak external demand, an inventory hangover and an overheating economy contributed to the 1.5% decline in gross domestic product in the first quarter. But the real economy—real, final private demand—remained hot, growing at a 3.7% pace.

Inside the second quarter RSM US Middle Market Business Index, rising prices amid a hot economy were on vivid display. While roughly three-quarters of survey respondents indicated that they were paying higher prices and passing those costs along to customers, revenues and net earnings remained strong, and top-line business sentiment actually improved, from 126.3 to 130.6. Despite rising fuel prices and elevated inflation, this is one reason why we expect 2.5% growth during the current quarter, with risk of a slightly quicker pace of expansion.

Real GDP growth at the end of economic booms/recoveries 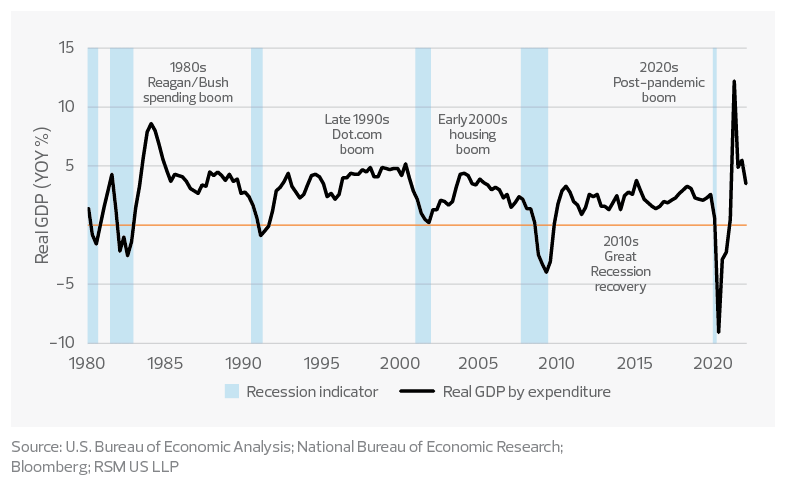 But there is no question that consumer sentiment has soured, and firms are concerned about the economy as rates increase along the long end of the maturity spectrum and mortgage rates approach 6%.

Rising prices will, in the near term, continue to cause households and firms to reallocate scarce dollars away from discretionary spending and investment in productivity-enhancing capital software, equipment and intellectual property toward basic goods and essential business functions.

Therefore, we now expect a below-trend 1.2% pace of overall growth during the second half of the year with a risk that the economy could slide into recession should oil prices head toward $150 per barrel or another round of supply shocks sends prices higher.

What is a recession?

One popular misconception is that a recession is defined by two consecutive quarters of negative growth. A recession is a significant decline in economic activity that spreads across the economy in depth and diffusion, lasting more than a few months. The depth, diffusion and duration of such a downturn include declines in real personal income excluding transfer payments, employment growth, real personal expenditures, real wholesale-retail sales and industrial production.

The National Bureau of Economic Research is charged with making calls on when the economy has descended into recession. The most recent recession occurred in 2020 for two months—March and April—followed by an uneven recovery and expansion that continues.

Determining the months of peaks and troughs is based on a range of monthly measures in the aggregate real economic activity published by federal agencies.

We expect the economy to continue to grow, albeit at a modest pace, during the final six months of this year and then most likely descend into a recession during the first quarter of next year.

There is still a chance that the economy can avoid recession. Unfortunately, that probability is quite low. The New York Federal Reserve’s dynamic stochastic general equilibrium modeling implied that the probability of the economy continuing to grow over the next 10 quarters was roughly 10%. Whereas the chance of it falling into recession over that same time was around 80%.

The body blow given to the domestic economy from inflation’s devastating punch tends to support that finding, and the economy could very well fall into recession during the second half of this year. We will explore risks around that probability below.

Risks to the outlook

The major risk to the economic outlook is linked to rising oil and energy prices. The rollercoaster in oil markets has pushed the average price per gallon of regular gasoline to around $5. Along with the 10% increase on a year-ago basis in the cost of food, that surge is the primary reason consumer sentiment has soured.

Rising food and fuel costs have already led to a tipping point for U.S. households that is going to dampen consumer activity into the second half of the year. We now anticipate a deceleration in consumer activity to a 1.4% pace in contrast with the 2.9% pace that we think will be the average during the first six months of this year. Any further rise in oil, gasoline and energy prices will create the conditions for a near-term recession.

Should the United States and the British militaries be assigned to escort grain shipments out of the Ukrainian city of Odessa to ease what is shaping up to be a global food crisis, that will almost surely send oil prices higher and tip the domestic and global economies into recession this year.

The second major risk is another round of supply chain snarls around American ports that result in delays of critical goods and rising prices akin to the disruption in microchips that sent auto prices higher over the past two years. 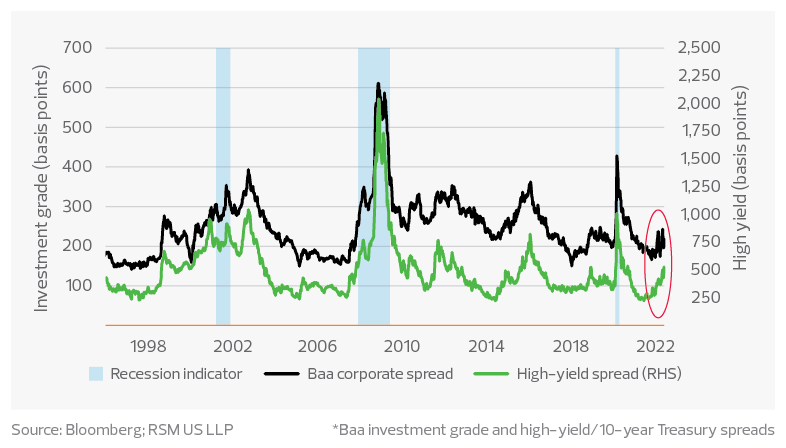 Finally, tighter financial conditions and rising rates have caused spreads on corporate bonds to widen. The resulting cost of doing business and refinancing of debt will add to the risk matrix that the economy faces as the corporate sector adjusts to slower demand heading into the final part of the year.

Price stability is a precondition for maximum sustainable employment, growth at or above the long-term trend rate of 1.8% and financial conditions that will not upend the economy. Price stability enables the economy to provide a stream of jobs and income growth. Without it, firms and households tend to pull back to avoid a general misallocation of scarce resources. That is why the Fed is engaged in a campaign to restore price stability with an unconditional return to its 2% price target.

We expect the Fed to increase the federal funds rate by 50 basis points at its July and September meetings, although a 75 basis-point increase in July cannot be discounted. We anticipate the central bank will increase the policy rate to a range between 3.25% and 3.5% by the end of the year, up from 1.5% to 1.75%. This likelihood has resulted in our RSM US Financial Conditions Index plunging to 1.7 standard deviations below neutral, which is consistent with an elevated risk of recession. 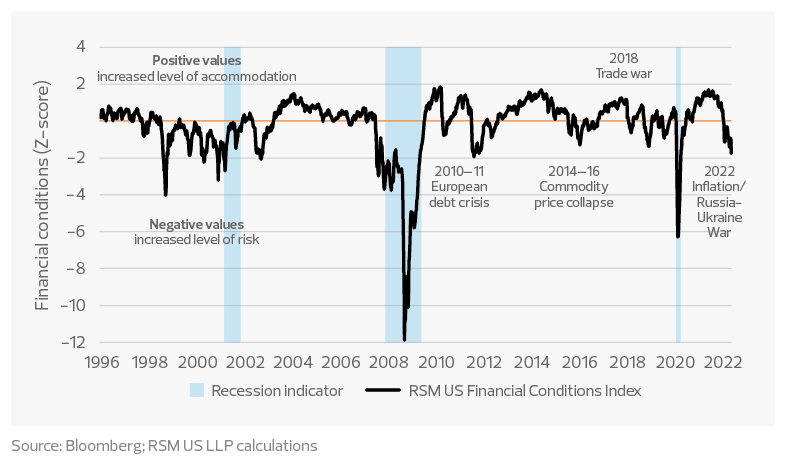 In our estimation, the first possible pause in the Fed’s rate hikes will be early next year. It is likely that the Fed will need to increase its policy rate to 4% or above to achieve its objective of a clear and convincing slowing of inflation over a period of months that will probably lead back near its 2% price objective.

In addition, should inflation prove persistent or accelerate, the Fed could very well increase the pace and magnitude of its balance sheet reduction policy. The Fed is currently reducing its balance sheet by $65 billion per month and will accelerate that pace to $95 billion in September. While there is no plan to sell securities into the market, that is not out of the question, either.

That balance sheet reduction will contribute to tighter financial conditions, a slowing economy and rising unemployment that we expect to observe later this year.

At this time, we do not expect any major or significant changes in fiscal policy that will either provide a cushion for lower-income cohorts as they adjust to higher prices or increase tax rates that would further cool the economy.

The risk of a recession in the near term is mounting as firms and households adjust to the Fed’s price stability campaign. Rising costs of basic goods and doing business are on the margins dampening overall economic activity. The probability of a recession is essentially a coin flip at this point, and the first quarter of next year would appear a likely point when the economy could potentially fall off a cliff. But another oil or supply chain shock this summer could accelerate that timetable.