Inflation rises during war and economic conflict. Price dislocation, price controls and self-rationing are facts of life during wartime.

Today, with inflation at a 40-year high and a policy rate near the zero boundary, policymakers face significant constraints as they try to find ways to mitigate rising costs on American households that are conditioned to general disinflation.

Over the past century, price instability reached its highest level during the two world wars and then again during the two consecutive economic wars declared by Mideast oil producers in the early 1970s and 1980s.

We have most likely arrived at a turning point where elevated inflation will define the economic narrative for several years. That may require much higher interest rates than have been observed in recent years and will diminish the probability of central banks achieving a soft landing of the economy.

The probability of a recession will most likely jump from the current 15% to roughly one in three as the economic data is released over the coming weeks.

While we think the current price shock will shave roughly 1 to 1.5 percentage points off growth over the next 12 months, it should not result in a general recession in the United States, though it will almost certainly spur a recession in the European Union.

The primary difference is the underlying resilience of the American economy, as demonstrated in the recovery from the pandemic, along with a reduced dependence on Russian energy and commodity exports. These factors should lead to a slowing of the economy, but not to an economic contraction. 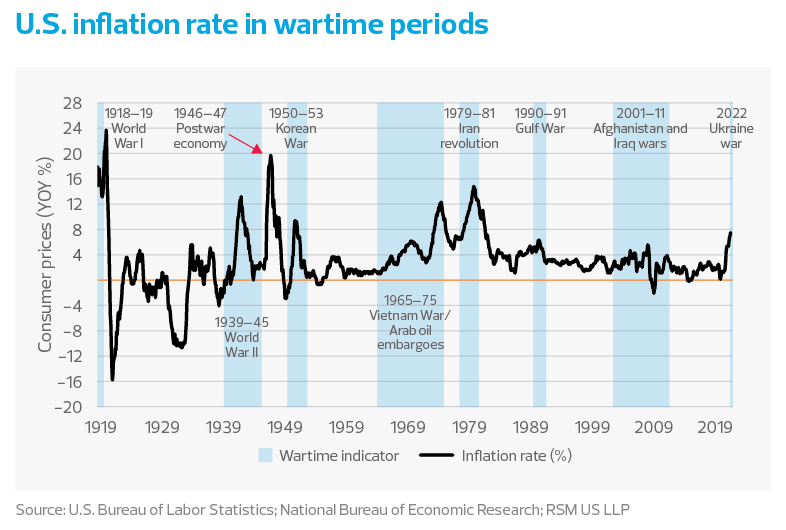 The combination of a unique confluence of factors during the pandemic and now the disruption to the flow of oil will almost surely unleash a period of inflation unlike anything since the 1970s.

But not all wartime inflation is the same.

The percentage point increases in inflation during wartime have diminished over the past century. That reduction, though, can be attributed to the moderation of the business cycles and the secular decline in inflation since the late 1980s.

The growth of the middle class and the broadening out of wealth over the past century have also contributed to a less abrasive impact of inflation on household behavior. In addition, the maturation of monetary and fiscal policies over the past three decades, forward-looking metrics of inflation expectations and credibility built up by central banks during that period have all contributed to diminished inflation risk.

More important, the diversification away from an overreliance upon fossil fuels, oil imports and a move toward the integration of renewable energy have resulted in the ability of the U.S. economy to better absorb such shocks. 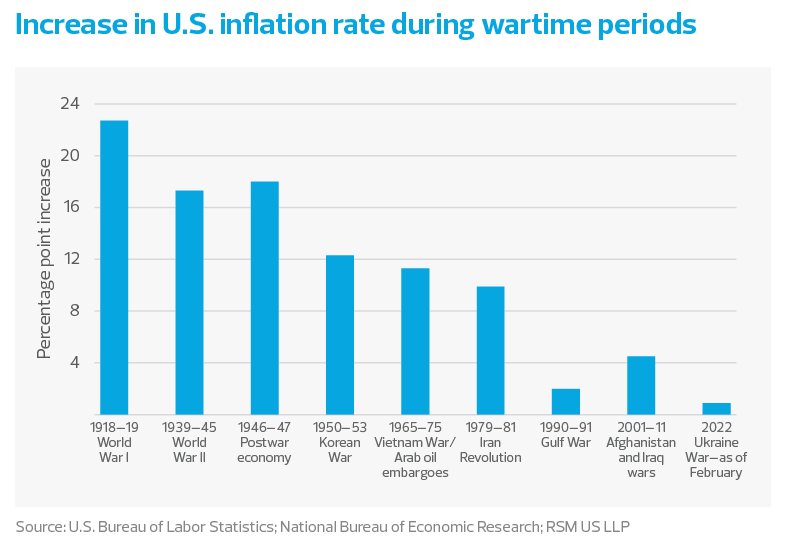 Other factors like the wave of cheap goods from China and the entry of millions of new workers into the global economy have directly contributed to the general disinflation that has defined the past 30 years.

There is the possibility of currency devaluations and a continuation of the flood of cheap goods into the United States, which would play a role in providing a check on inflation.

But the economy is in new territory. This is the first European conflict during the era of globalization that involves significant economic sanctions, so it would be a mistake to assume that inflation and the policy responses that are sure to follow will look like those in the near or distant past.

Other than the interim period between the oil crises of the 1970s and 1980s, wartime inflation spikes were relative to prevailing low levels of inflation.

The shock of Russia’s invasion of Ukraine occurred just as the U.S. inflation rate had already surpassed 7%. Supply chain issues in meeting the post-pandemic surge in demand—and the difficulty of reestablishing oil production levels—had yet to be fully overcome but appeared to be within the range of resolution. 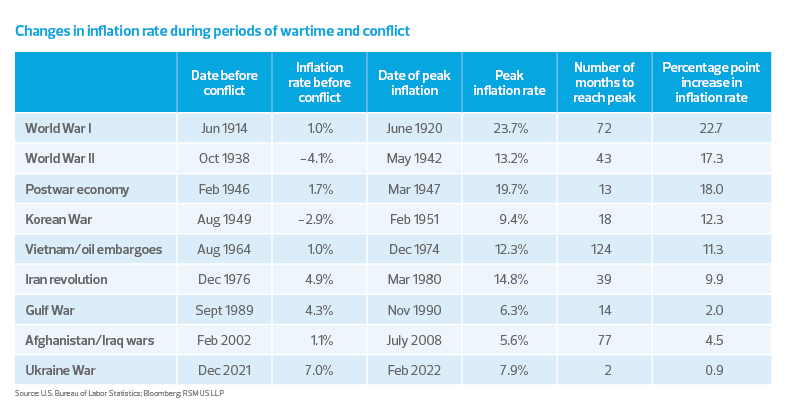 In some respects, this represents a major risk to the recovery from the pandemic. Given the damage to world order and to further expected disruptions in the global supply chain, there is reason to think that the current 7.9% inflation rate is just the beginning.

It is entirely possible that top-line inflation may exceed 10% this year before settling into the high single digits to close out the year.

As we have shown in prior work, energy prices remain a significant determinant of consumer price increases, if only because of their weight. And the prospect of removing Russian exports of natural gas and crude oil from the world market has already pushed energy prices higher.

Although Europe would be hit the hardest by further sanctions on Russian energy sources, energy is priced in a global marketplace. Anticipated and actual disruptions in supply are bound to spill over into the North American economies.

Because of the omnipresence of gas station signs, an ever-increasing price of gasoline will have an impact on inflation expectations and consumer spending behavior.

Are price controls in order?

The EU is looking at capping electricity prices to address the fallout from the sanctions placed on Russia. That prompts a question: Are price controls part of the solution?

We think the answer is no. Based on the experience of oil shortages during the two 1970s Arab embargoes and the aftermath of the 1979 Iranian Revolution—which we think is the best analogy for the current price shock—government intervention into the market for gasoline and energy would be counterproductive and would most likely backfire. Price controls would only lead to further shortages and price dislocation that would take years to recover from.

A 2019 study found that price controls on gasoline imposed after the Iranian Revolution exacerbated shortages by not allowing rising prices to curb demand. On the supply side and in an environment of rising prices, price controls incentivized refiners to withhold gasoline and sell it later at higher prices.

We can try to quantify the impact of inflation by looking at past experiences, but the world has changed. Today, the U.S. economy is less dependent on energy than it was in the 1970s and 1980s—a result of engineering advances that have lessened the pass-through effects of energy price increases on other products.

Still, the prospect of higher prices is likely to have a dampening effect on consumer spending, which would become a drag on overall economic activity.

Although we have no idea how long the Ukraine war will last, it seems clear that impediments to the peaceful transaction of commerce will exact a cost on households.