This summer was supposed to be the season of revenge travel. With COVID-19 caseloads easing and consumers flush with savings built up during the pandemic, the travel industry was anticipating a robust season. Consumers were so eager to get out of the house that little could deter them, the thinking went.

But that was before a new risk emerged: stubborn, elevated inflation. Even as overall inflation in the United States has surged above 8%, the components of the consumer price index that directly affect travel have risen even more. These include airfares, which are up by 33.3% year over year; gasoline, which has surged by 43.6%; and even food away from home, which has increased by 7.2%. For hoteliers, labor challenges continue to stress the summer travel experience.

It all has left travel industry executives wary, even as they say they still expect a busy season.

"Even with rising inflation in gas prices, we continue to expect strong consumer demand, especially as we enter the busy summer leisure travel season,” Patrick Pacious, president and chief executive of Choice Hotels International, said on his first-quarter earnings call.

He added: "It is worth noting that gas prices historically have had little to no impact on travel. Rather, consumers indicate that rising fuel costs could mean adjusting how they spend their money, such as traveling shorter distances, choosing destinations closer to home or not dining out as often, but they are going to travel."

Indeed, surveys have supported the notion that Americans are determined to get on the road this summer. Approximately eight in 10 Americans are scheduling travel plans, according to a recent survey from The Vacationer.

But consumers are aware of rising costs. According to a March poll by Bank of America, 62% of respondents expected to travel more than usual in the next 12 months, but more than 40% of the respondents said higher gas prices would cause them to travel less, while 28% said they could take shorter trips to offset higher costs. Another survey from Bankrate in March found that 70% said they are changing their summer travel plans because of inflation.

History has shown that there is little correlation between gas prices and performance in hospitality. For instance, the 10-year average for gas prices is just under $3 per gallon, but prices have been volatile from year to year, given the constant changes in the energy sector. Apart from the global COVID-19 pandemic shutdown, hotel occupancy has been stable with its seasonal peaks and valleys. 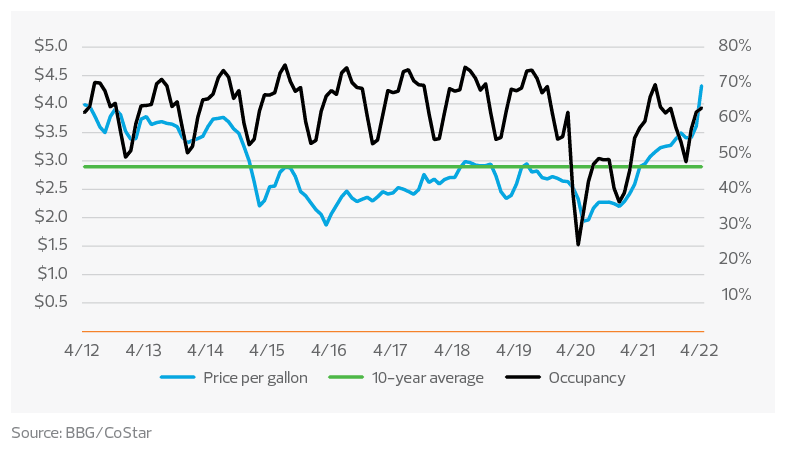 Airfares continue to climb as travelers get more comfortable with lines at the airports and full flights. Flights in May averaged $360 per round-trip, with domestic airfares trending 10% above 2019 prices, pointing to the direct effect of record jet fuel pricing, increases in total passengers and pressures from rising labor costs, according to a report from Hopper.

Passengers would most likely stomach additional costs to reach their desired destination. But according to data from FlightAware, more than 7,000 flights were canceled during the Memorial Day weekend as airlines continue to deal with an acute shortage of workers, creating additional barriers for the travel season.

Gas and airline price increases are only part of the travel story. Although hotel occupancy has been slowly recovering to 2019 levels, guest rates for all hotel classes have been on a torrid pace, exceeding the highest levels on record.

The average daily rate exceeded $144 per night in May compared to $130 per night in February 2020, the last full month of service before the COVID-19 shutdown, according to CoStar/STR data. And if Memorial Day is a precursor to summer travel demand, this could be a banner year for the industry.

Hospitality on the mend 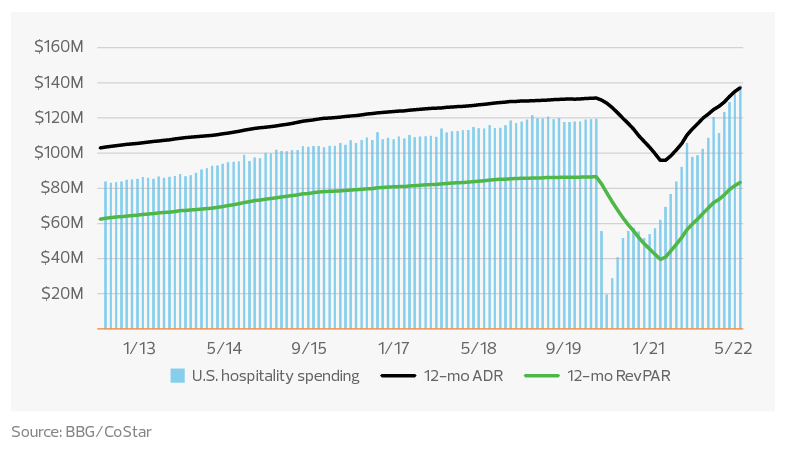 While higher prices have done little to dampen demand so far, leisure and hospitality companies, as well as airlines, are contending with another, more practical challenge: finding the workers to serve this higher demand.

Workers have been in chronic short supply for much of the pandemic. But leisure and hospitality have been hit particularly hard and have had one of the slowest job growth rates since the beginning of the pandemic.

The U.S. economy added 390,000 jobs in May, of which the hospitality sector accounted for 84,000. However, the unemployment rate for hospitality workers ticked up to 5.1% compared to overall unemployment of 3.6%. 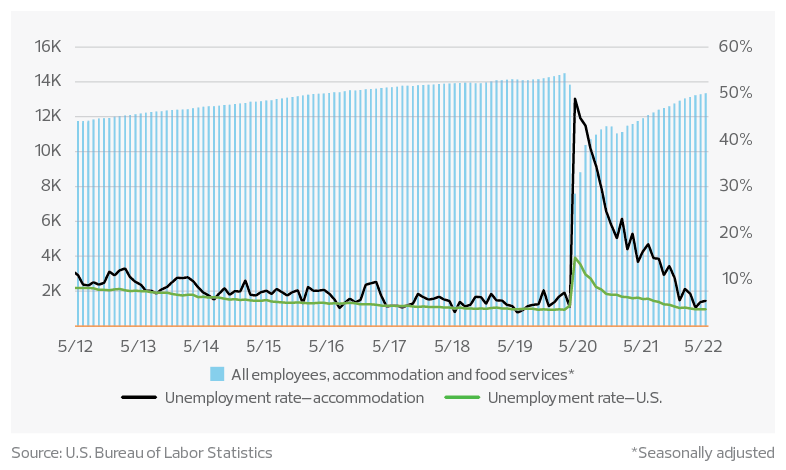 In addition, wage growth in hospitality has been the most substantial of all sectors, rising by roughly 20% since the beginning of the pandemic, according to U.S. Bureau of Labor Statistics data.

Nearly half of the hospitality workers (45%) have become even less satisfied with their jobs since returning from COVID-19 layoffs, according to a report from Harri, in partnership with consulting firm CGA. The workers cited a lack of flexibility, increased workload and pay not matching the job description as the main factors.

Hospitality entities focusing on providing growth opportunities, less structure in schedules, company culture and unique benefit packages will have the best chance at capturing the limited available talent in the hospitality industry.

Until the talent pool has been restored, companies will need to continue leveraging technology, innovation and cross-training existing employees to support operations.

Summer travel demand appears to be in full force even in the face of enduring inflation. The travel industry will continue to reap the benefits of the travel surge and manage the challenges associated with labor pressures. Hospitality companies will need to continue to evaluate customer preferences using data analytics to properly allocate limited labor resources, use technology to assist with labor shortages and maximize opportunities to develop talent within.