Inflation and the middle market

The balancing act of preserving wage gains and taming inflation

Wage increases and rising inflation are now of paramount concern to policymakers and businesses.

While conditions are not yet ripe for the kind of wage-price spiral that wracked businesses in the 1970s, the economic growth and emboldened labor market of the past year require a different policy response than the previous two business cycles.

For the Federal Reserve and Congress, that means striking a careful balancing act of reining in inflation while preserving hard-won wage gains among the nation's workers is no easy task.

To this end, monetary authorities have started to take measured steps to contain price increases while not crimping advances in productivity or growth. At the same time, we would hope that Congress would create incentives for businesses to address shortages of housing and energy that are pushing inflation higher.

Make no mistake: The recent wage increases are not high enough to pose an immediate risk to economic stability, corporate profits or inflation. Instead, the rising wages have been supported by higher productivity among businesses.

The economy can support higher wages as long as productivity increases at a faster rate. And this has indeed been happening. Productivity has been increasing since late 2016 because, in no small part, of the private sector continued investment in its competitiveness.

Consider corporate profits. The 4% increase in the employment cost index during the fourth quarter of last year and the near 7% increase in average wages have yet to put a dent in those profits. This implies that productivity is rising as the economy booms.

In the 1970s, by contrast, cost-of-living increases were built into labor contracts, and wage growth was unresponsive to changes in productivity. But this time around, the pandemic has become the catalyst for a significant shift in the labor market, with wages in the private sector now more a function of the supply and demand for labor and its productive abilities than in previous generations.

During the fourth quarter of last year, nonfarm productivity increased by 6.6% amid a 9.2% increase in overall output. For businesses, the cost of labor should correspond to its contribution to profits, with labor churn a welcome sign of engaged employees working their way up the income ladder. As firms experience an increase in productivity and profits, they are in a position to retain their workforce via higher wages and salaries. 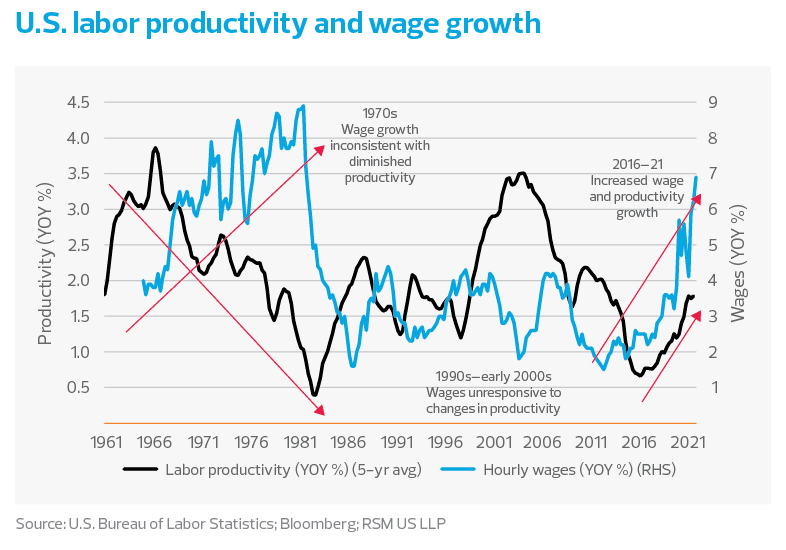 A more efficient marketplace for labor

Wage growth in an open economy is a traditional measure of economic growth. And as with general price increases, a lack of wage growth signals stagnation. This was observed during the decade of slow wage growth and disinflation between the financial crisis in 2008-09 and the shock of the pandemic in 2020.

Today, that is not the case. Instead, the delivery of sophisticated technology to workers computers and work sites is resulting in greater output per worker that supports improved wages even as it dampens inflation on the margin.

At the same time, and perhaps more important for the future of the economy, technological advances have created a functioning marketplace for labor. Workers are better able and more willing to match information on employment opportunities with their personal and financial choices.

Time spent at home during the pandemic and government income assistance gave workers the time and the means to reassess their priorities. Yet this two-year window is only part of a longer-term trend of worker advancement. As a result, workers have quit their jobs at record rates.

So when the bottom fell out of the economy in 2008-09, there were limited choices in employment and income, and the quit rate plunged.

As the economy slowly recovered, employment opportunities and the quit rate increased. We have been seeing a similar pattern of labor churn in recent months.

Over the past two decades, wage growth has been generally higher for job switchers than for workers who remain in their jobs. In the latest month, workers who switched employment had wage growth of 4.6% per year, while wages for those who stayed in their job grew by 3.4% per year. It makes sense that employees would walk away for a higher-paying job.

There are other signs of change, such as increases in the wage growth for part-time workers. We expect this labor churn to continue. It is a sign of a vibrant economy and should be welcomed by businesses looking for workers with entrepreneurial, self-selecting bent. 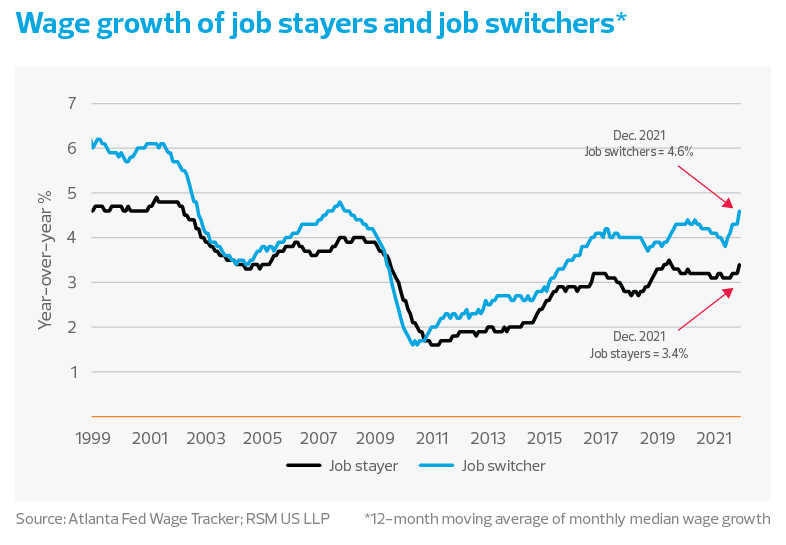 A shrinking supply of labor

Just as the Federal Reserve finds that supply and demand imbalances related to the pandemic and the reopening of the economy have continued to contribute to elevated levels of inflation, we find similar circumstances in the labor market.

While we would expect wages to grow during an economic recovery as employers compete for employees, the distribution among occupations has not been uniform. It should be obvious to anyone who has had to wait for restaurant food or fuel oil delivery; a shortage in the number of service workers has driven up the cost of labor.

There has been a well-documented account of workers no longer willing to work in unhealthy or dangerous conditions or for salaries that do not cover basic expenses like child care.

By comparison, and at the other end of the income spectrum, wage growth in the third quartile was virtually flat on the year, and there was a decrease in the rate of wage growth from a 3.3% to 2.8% rate in the highest quartile.

The result is a smaller supply of labor to meet the growing demand for low-wage services, which pushes up the wage requirements for those willing to perform those services. The policy answer is a rational immigration program, which seems unlikely in the current political environment.

Each worker has a reservation wage, defined as the lowest wage for which they would be willing to trade their time and effort. For a young family, it takes simple arithmetic to decide who works and who doesn't.

For example, the cost of child care in Massachusetts eats up roughly 25% of earnings for the average family. If a family member's take-home pay is less than the annual $21,000 cost of child care, then it's simply not worth it for them to go to work. In Mississippi, that cost is $5,400 for a single infant, which is still unaffordable for many families.

The collision of a lack of affordable child care options and the need for families to protect their children during the pandemic has resulted in everything from unrecoverable loss of workdays as families care for children when day care centers are closed due to a drop in labor force participation among the prime working-age population, which is again an unrecoverable loss of workdays.

At the other end of the age spectrum, wage growth for older employees has hovered around 2.1% per year since 2015, barely keeping up with the cost of living. Health concerns and a sense of going nowhere have sparked an increase in the reservation wage for workers 55 and older, resulting in about 3 million workers retiring. 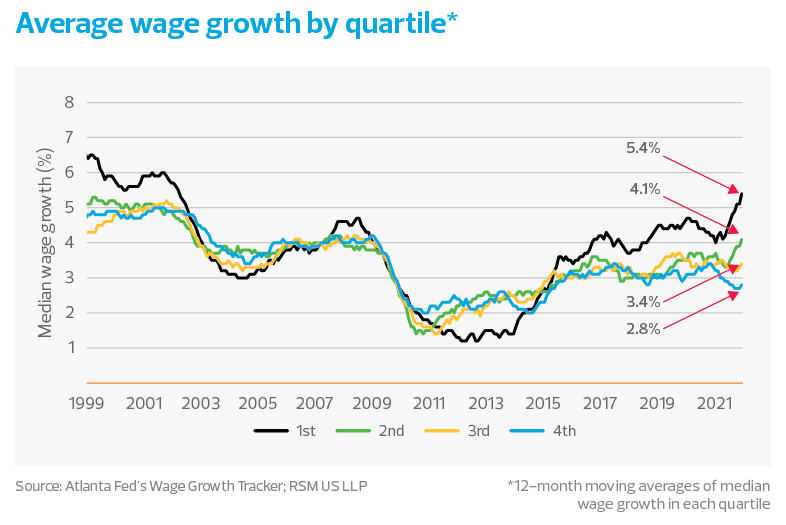 There is no denying that the rapid recovery of economic activity has led to price and wage increases.

The economy is now operating above its pre-pandemic level and near full employment. Policy normalization in the guise of rising interest rates is not going to define the next few years but rather managing a policy that will protect the wage gains of low-income households by minimizing damage to their purchasing power caused by inflation.

Workers might not have the bargaining power of earlier generations, but technology has given them the ability to optimize their earnings and their ability to meet family obligations.

Rather than a concern for business, this should be seen as a way to maintain an engaged workforce able to adapt to changes in production even if labor force growth continued to diminish.

Without the return of immigration on a wider scale, firms should expect low-wage workers to remain in short supply and expensive relative to pre-pandemic levels.