Travel restrictions, social distancing guidelines and lockdowns across the country have created a perfect storm for the travel sector as conventions and other events get canceled, more hotel rooms sit empty and spending plummets at restaurants—many of which are closed—due to the coronavirus pandemic.

Conferences and meetings make up a substantial portion of revenue for hotels in the United States. Large chains and boutique properties alike are expected to take a significant hit as the result of recent cancellations and delays in the domestic market. In early March, the city of Austin, Texas, canceled programming for its annual South by Southwest music and film festival. The Boston Marathon was rescheduled from April to September; the Indianapolis 500 was postponed from May to August and scores of other arts and sporting events around the country have been canceled as organizations make efforts to slow the spread of the new coronavirus disease, COVID-19. 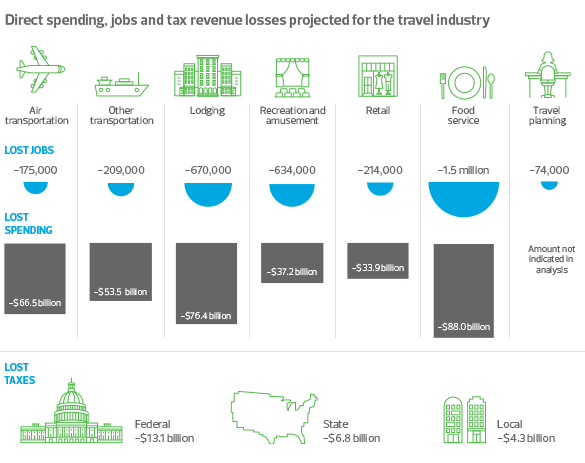 Potential 2020 business spend revenue loss could be $23.1 billion monthly in the United States, according to figures from the Global Business Travel Association. U.S. lodging is projected to lose a staggering $76.4 billion and 670,000 jobs for 2020, according to data from Politico Pro.

The U.S. travel industry as a whole is expected to see “a 75% revenue drop over the next two months and continued losses over the rest of the year reaching $355 billion,” according to a coronavirus economic impact report put together by forecasting group Oxford Economics and released on the U.S. Travel Association’s website in mid-March. The $355 billion decline in travel spending will result in a total loss of $809 billion in economic output, “more than six times the impact of 9/11 on travel sector revenue,” the report found.

Travel-related jobs are expected to fall by 3.6 million in the second quarter of 2020, according to the report, resulting in a total employment loss of 4.6 million U.S. jobs when taking indirect losses into account.

The fallout of the COVID-19 pandemic is now showing up in U.S. hotel performance metrics. Revenue per available room (also known as RevPAR) deteriorated 32.5% in the week that ended March 14, and a staggering 69.5% for the week that ended March 21, according to hospitality data firm STR as reported in Hotel News Now. The United States might look to China and Italy to see what could happen in the weeks ahead as the number of confirmed COVID-19 cases continues to grow. While China took the brunt of its economic hit to hotel RevPAR in February and March, with declines of 90% year-over-year in those months, North America and the rest of the world are expected to feel the majority of the impact to the industry in March and April. RevPAR is expected to decline 50.6% in 2020, Hotel News Now reported at the end of March.

Though it’s difficult to know what the precise long-term impact of the pandemic will be, it is widely expected that this is just the beginning of a long slide in demand and RevPAR in the United States as many Americans practice social distancing and staying at home. As businesses and state and local governments have announced rules restricting nonessential travel, hotel room demand has evaporated seemingly overnight. That’s especially true in cities that have become COVID-19 hotspots.

Year-over-year RevPAR declines are expected to continue until new COVID-19 cases slow and uncertainty in the outlook is resolved. This year is on a trajectory to be the worst year on record for occupancy, according to STR. Luxury and upscale hotels will likely be the most significantly affected.