Negotiations between the Biden administration and the GOP minority in the Senate reveal strengths and shortcomings in their policy preferences and objectives about how to promote an economic recovery.

Through it all, estimates of the domestic output gap–the difference between actual and potential gross domestic product–and what it will take to achieve full employment strongly suggest the need to go big on fiscal aid and stimulus programs.

While it is encouraging that both the GOP and Biden administration are targeting fiscal relief in excess of the nominal output gap, the administration clearly intends to err on the side of a return to full employment as soon as possible. Our estimate of what that will take, within the context of the pandemic-induced shock, strongly implies the need for roughly $2 trillion in fiscal aid.

The risk to the economic outlook, after all, is not in doing too much–resulting in large and sustained fiscal activity–but rather in fiscal fatigue and the inclination to wait and hope for the best, as some would prefer.

The output gap and full employment

Recent estimates by the Congressional Budget Office imply that real potential U.S. growth has been below 2% since 2007 and will average 1.8% over the next decade before falling to 1.7% in 2031.

Given the lingering economic damage caused by Trump-era policies and the economic scarring caused by the pandemic, a vigorous economic response is needed. The objectives are to bolster near-term growth, to ensure that the U.S. economy avoids the sub-2% growth rate of the 2010–2020 period and to bring the economy back to full employment, which we define as a 3.5% unemployment rate.

To do that, one must accurately estimate the size of the output gap and then adjust that gap for the long-term effects of the pandemic. This will allow us to identify the minimum fiscal boost necessary to return to full employment.

We start with an initial $666 billion output gap, which compares the existing economy to what the CBO model considers to be attainable. But once we adjust potential GDP for the damage to economy caused by the pre-pandemic manufacturing recession and the pandemic itself, that output gap climbs to $816 billion.

All of this suggests that a significantly longer timeframe and much more substantial fiscal boost will be needed to get back to full employment. The CBO estimate informs the current policy debate in Washington over next steps on fiscal aid. In fact, the GOP proposal of an additional $619 billion hews closely to plugging the output gap that existed at the end of last year.

The Biden administration—likely due to lessons learned during the Obama years—has put forward a $1.9 trillion proposal that looks to provide immediate relief as well as put the economy back on track toward closing the employment gap. 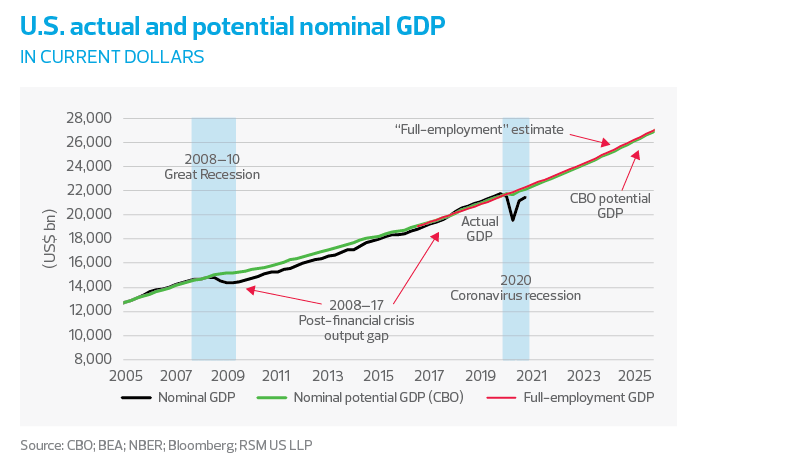 This estimate indicates that the GOP proposal will most likely fall short on both goals while producing a suboptimal recovery and expansion. Given that in the aftermath of the Great Recession it took several years to return to the maximum sustainable level of GDP and more than a decade to return to full employment, this is the major policy discussion of the moment outside efforts to speed up vaccine distribution.

While economic activity is recovering and the output gap will narrow by the end of the year—this is different from maximum sustainable output—we anticipate severe dislocations in the labor market and commerce that are bound to outlast the pandemic. As such, we are at least three years from returning to anything resembling full employment. In our estimation, the CBO data on its surface tends to understate the size and duration of fiscal aid and stimulus needed to close the output gap and return to full employment. 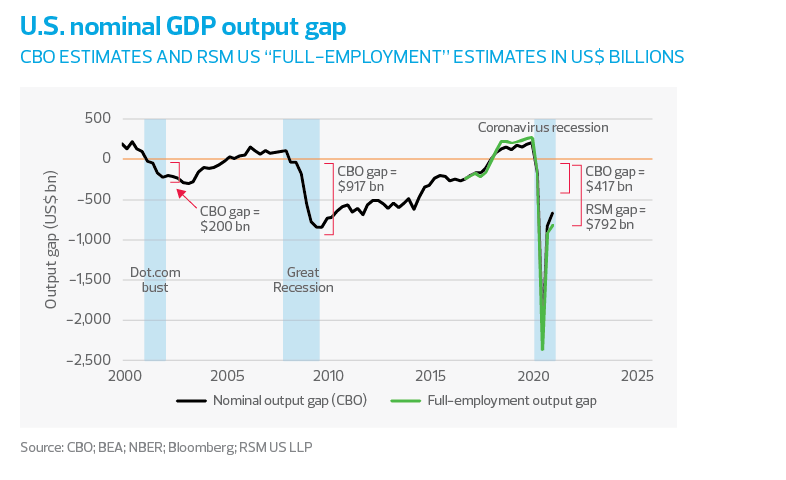 When one faces such a shock, that policy path requires the effective combination of fiscal and monetary policy—i.e., large spending programs and zero interest rates—and policymakers who are willing to overwhelm the problem and then stick with it. The greatest enemy of a return to the full capacity to produce and full employment is fiscal fatigue, not overspending.

What is the cost of returning to pre-pandemic levels?

Can we estimate the cost of programs necessary to kick-start the economy in 2021 and get it back to its potential? The nonpartisan Bureau of Economic Analysis calculates the value of actual economic activity, and the nonpartisan CBO offers estimates of the economy’s potential output, with the difference referred to as the output gap.

The framework for the CBO’s estimate of potential GDP focuses on two factors: labor input, or hours worked, and additions to the nation’s stock of plants and equipment.

So a starting place for determining the amount of fiscal stimulus is the CBO’s estimate of the output gap. In fact, during the depths of the 2008-09 financial crisis—and while the Federal Reserve became the lender of last resort for the world—the Treasury Department and Congress worked in concert to fill an output gap that reached $917 billion. Their efforts saved the U.S. economy from falling into an outright depression.

Congress passed the $787 billion American Recovery and Reinvestment Act, which roughly matched the CBO’s $870 billion average estimate of the output gap in 2009.

Though the ARRA was long on tax relief, the tax benefits were distributed among households with the intent of propping up take-home pay and enabling consumer spending.

Also notable were grants to state and local governments, with a particular focus on education and extensions for state-run and financed unemployment benefits.

In retrospect, though, that aid and stimulus program were insufficient and needed to be much larger.

In our estimation, this is one of the primary reasons—structural and demographic changes play a role here, too—why the pace of growth and real potential growth in the years following the Great Recession fell below 2%.

As we showed in the previous figure, the CBO lowered its estimates of U.S. potential GDP during each of the past three recessions. This is in line with the estimation framework discussed earlier.

The CBO’s estimate of potential GDP tells us what is attainable, given the economy’s capabilities in each particular circumstance. As such, the CBO is anticipating the economy to return to its pre-pandemic rate of growth only by late 2022. That seems to be a reasonable estimate were it not for the nearly 10 years that it took to close the gap after the financial crisis.

So should the targets for fiscal policy be only what is attainable? Or should the target for policymakers include what should have been, had there not been a policy mistake or an event that was out of anyone’s control—and what could be if innovation is fostered in the public sphere? We’ll call that the “full employment” target.

In that spirit, we estimated potential GDP before the 2018–2020 manufacturing recession and the 2020–2021 pandemic. It’s a simple extrapolation of the growth trends that were in place before 2018, which are then spliced into the CBO’s estimated growth trends in later years.

Still, those figures are bare minimums for getting the economy back to potential and to fund “back pay” for those who had to accept lesser salaries at substitute jobs, and those who experienced a permanent loss in living standards. This also does not include any efforts to modernize the economy’s crumbling infrastructure.