Given the growth and economic power of the Hispanic community in the United States, we believe it will strengthen the backbone of the real economy, helping the country solve a range of issues in the post-pandemic world, such as labor shortages, dampened population growth and structural economic changes.

The recent National Hispanic Heritage Month offered a fitting time to examine the Hispanic community’s contributions—economic and cultural—in the United States, especially because the current economic climate and labor market disruptions will require companies to be more innovative and thoughtful in how they attract talent and customers.

For the middle market—the primary driver of the real economy—growth in the Hispanic population presents great opportunities for companies to expand by providing more products and services for the Hispanic community and increasing the labor force by hiring more Hispanic Americans.

Understanding the impact of the Hispanic community, especially on the real economy, is crucial as this cohort has grown faster than non-Hispanic groups over the past decade and now accounts for 19% of the U.S. population, according to the latest census data. This growth translates to 1 in 5 individuals identifying as Hispanic, and 1 in 4 individuals below 19 years of age identifying as Hispanic.

Hispanic Americans’ spending power was estimated to be close to $1 trillion in 2019—a number that will grow as more members of this community enter their prime spending years. Moreover, the total economic output of Hispanics in America was roughly $2.6 trillion before the pandemic. If Hispanics living in the United States were an independent economy, the Hispanic gross domestic product would be the eighth largest in the global economy—larger than that of Brazil, Italy or South Korea.

In addition to spending power, the U.S. Small Business Administration estimates there are 4.6 million Hispanic-owned businesses in the United States. Before the pandemic, these businesses generated $500 billion in annual revenue and employed 3.4 million people, according to the Stanford Latino Entrepreneurship Initiative.

The growing Hispanic community represents tremendous potential. However, to fully realize it, businesses and policymakers need to work to address challenges the community has faced in recent decades, which can hamper development.

The longtime gap in unemployment rates between the U.S. Hispanic population and the rest of the country often widens in the aftermath of a recession and narrows as the economy moves toward the end of an expansion, reflecting that Hispanic Americans have been more susceptible to economic downturns than their white counterparts.

When it comes to full employment, the Federal Reserve’s role in helping the economy achieve full employment using monetary policies while balancing inflation becomes the main focus, as inflation has been running hot since early this year. In recent economic cycles, the Federal Reserve did not consider unemployment rates based on demographic groups when setting policy. As such, rate hikes occurred while the unemployment rates of the Hispanic community were higher compared to non-Hispanic.

However, in recent months, the Federal Reserve has continued to show its acknowledgment of the importance of economic inequality. Chairman Jerome Powell stated during Jackson Hole’s economic symposium in August that “joblessness continues to fall disproportionately on lower-wage workers in the service sector and on African Americans and Hispanics.” 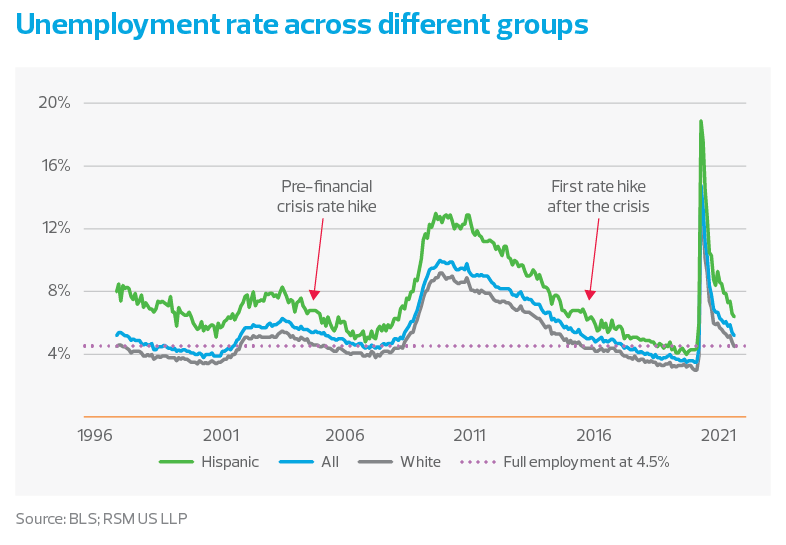 Real median annual household income by race and ethnicity shows that Hispanics take home $55,000 compared to $75,000 for whites. Despite the gap, for the past decade, the real median income for Hispanics has been growing at an average rate of 2.2% per year, compared to the 1.5% rate for non-Hispanics.

While the gap has narrowed slightly over the past 25 years, with Hispanics purchasing homes at a much faster pace than the rest of the U.S. population, significant work remains to close that gap. 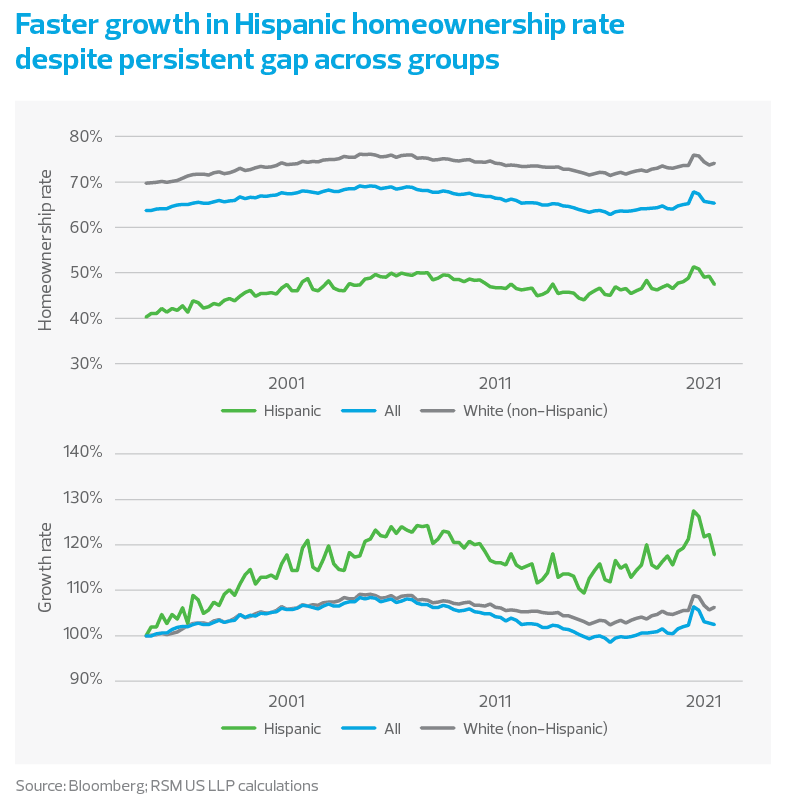 Much of this homeownership gap can be traced to differences in age, income, education and other factors associated with homeownership.

The median age of Hispanics in the United States is 29.8 years, compared to 43.7 years for whites, according to the U.S. Census Bureau; however, even when analyzing homeownership by age group, we find that homeownership is lower for Hispanic households than white households across every age group.

For the middle market—the primary driver of the real economy—growth in the Hispanic population presents great opportunities for companies to expand.

The disparity in homeownership across age ranges is largely due to education and income levels. More education tends to lead to higher incomes and homeownership. In 2020, over 70% of Hispanic Americans in the United States did not have a college degree, according to data from the U.S. Census Bureau.

While there is significant work to do to close the education gap, the rate at which Hispanics are obtaining a college education has increased dramatically over the past 40 years, with the rate of Hispanic graduates age 25 and older nearly doubling over the past two decades.

However, the pandemic has posed obstacles—enrollment data from the National Student Clearinghouse found a 5.3% drop in the number of Hispanic undergraduates in spring 2021 compared to this same time last year. The drop can be traced to the disproportionate effects of the COVID-19 pandemic experienced by Hispanic families, forcing many students to cancel or delay their education plans due to financial constraints.

As levels of education continue to rise, it is reasonable to conclude we will see increased participation in the labor force, more Hispanics sitting in C suites, higher homeownership percentages and lower household income disparities.

Opportunity for the real economy

Firms cannot afford to miss the opportunity to factor these dynamic societal changes into their operations, from labor and investment to development of products and services to marketing. 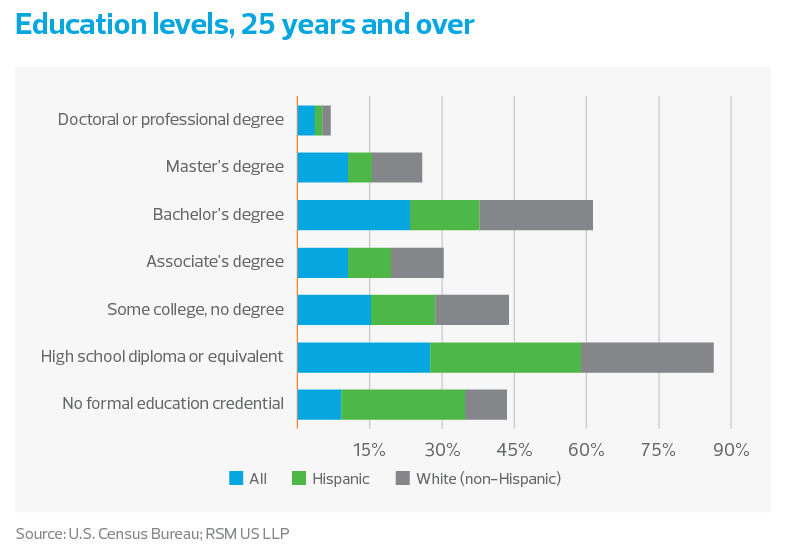 Hiring, retaining and promoting Hispanic employees could help ease the labor shortages that have characterized the workforce as of late. The growing spending power of the Hispanic consumer could open new product or service opportunities for middle market businesses. To be an attractive brand and employer for the Hispanic community, companies may want to review their policies, cultural programs and marketing to ensure inclusivity.

To fully realize the potential of this ascendant community, companies will also have a role to play in eliminating persistent economic barriers that hinder the development of the Hispanic community. For example, middle market leaders could look to invest in education and professional development programs to prepare Hispanic workers to meet the increasing demand for high-skilled jobs in the coming decades.

As the Hispanic community continues to rise, the spillover effects from greater levels of education, employment, rising income levels and higher homeownership rates can spread through the economy, bringing up the overall income and spending levels in the U.S. economy for years to come.

A note on the terminology