Employment in Black and white

Economic fallout from the novel coronavirus pandemic and the civil unrest in the weeks following the tragic death of George Floyd have placed an uneasy spotlight on the disparity in employment opportunities among U.S. ethnic groups—in particular, the wide income gap between white and Black Americans.

African Americans, whose ancestors were forced to help build the country’s infrastructure—laying the foundations for free enterprise and the wealth that followed—suffer from systemic racism and the degradation of basic human rights.

Some may point to standouts in the Black community such as Barack Obama and Colin Powell, arguing that everyone has equal opportunity. But this flawed logic is akin to saying everyone has a chance to win mega millions. One must look instead at time-worn systemic patterns to get a handle on the inherent disparities of race.

Why are Americans of African descent victimized by the coronavirus more than those of European ancestry? Why are schools in predominantly Black communities struggling for books and air conditioning, while suburban children in predominantly white neighborhoods attend modern campuses?

Throughout our history, Blacks in the United States have faced a clearly identifiable employment inequality that persists to this day. With the worst of the economic free fall now behind the United States, the opportunity to address long-term inequities embedded in society and the labor market cannot be missed. Until there is equal opportunity to obtain gainful employment for all Americans, the true promise of America will not be realized.

Using the statistics that follow, you can decide for yourself if the legacy of racism in the United States has been resolved; you will likely see an opportunity to commit to ensuring that equal education, opportunity and well-being become available for all.

Unemployment for white men aged 20 and older has averaged 4.8% since 1972, the earliest  year  for  which data is available. For Black men, it is 10.6% over the same period. Though great reductions  in  joblessness  have been made during the economic recovery since 2010, a gap still exists (see Fig. 1  below).

Fig. 2 shows that the gap between Black and white unemployment increases during recessions and then endures for months after, before narrowing again during the ensuing recovery. At best, the pattern speaks to white privilege, but more likely it is evidence of a longstanding bias in hiring and firing. 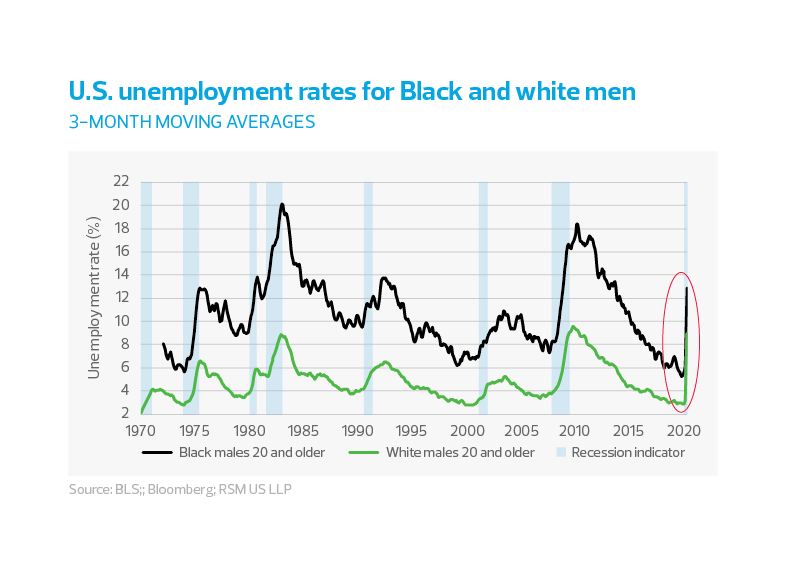 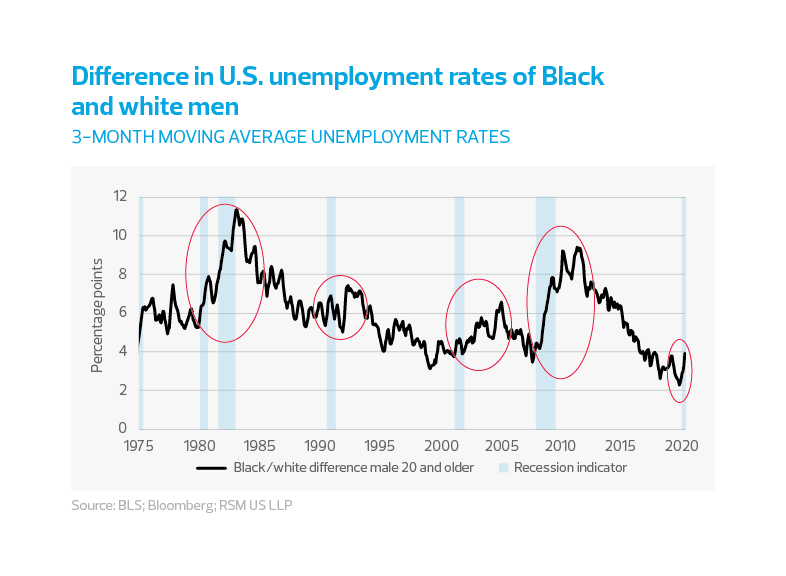 Though the employment profile for Black women is slightly better than Black men, a clear Black-white gap persists. Unemployment for white women aged 20 and older has averaged 4.9% since 1972; for Black women it is more than double at 10.0% (see Fig. 3 below).

Fig. 4 shows that, similar to the trend with adult men, the unemployment gap between white and Black women also increases during recession, remaining for months after before narrowing again in recovery. The gap’s tightening during the current health crisis most likely attests to the indiscriminate nature of the shutdown of normal activity.

Meanwhile, the unemployment rate for white teenagers in the labor force (16 to 19 years old) has averaged 15.4% since 1972, while that of Black teens has been a staggering 34.5%. The high rates for both cohorts entering the workforce present a disturbing reminder of the need for programs to accept first-time employees to get them on a path toward successful careers. 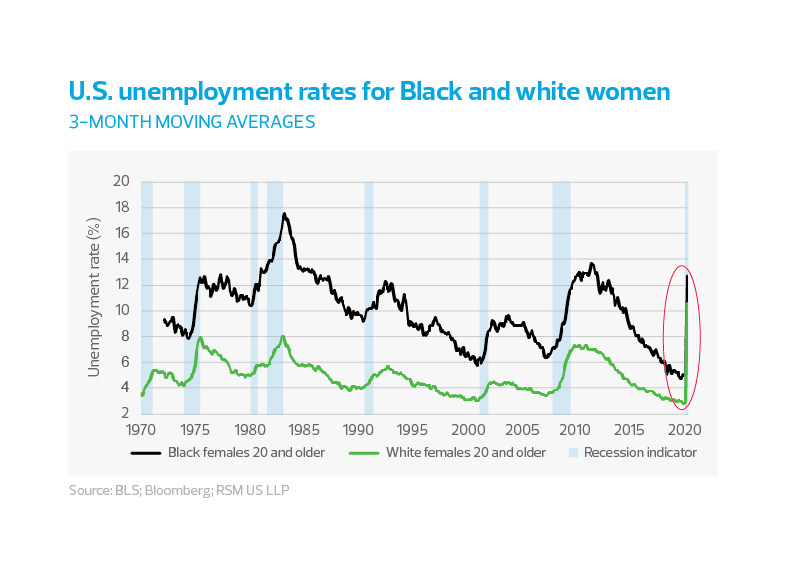 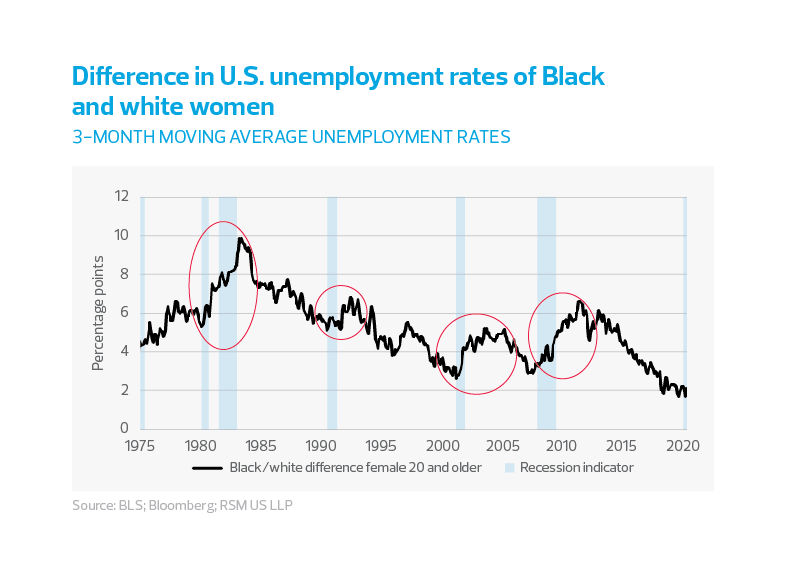 The unemployment disparity between Black and white Americans is exacerbated by the wage stagnation of the past four decades. Looking at inflation-adjusted weekly earnings of salaried employees since 1979 in the figure and table below, earnings in real (inflation adjusted) terms have been flat, with average annual increases of just 0.4% since 2000 (see Figs. 5 and 6). 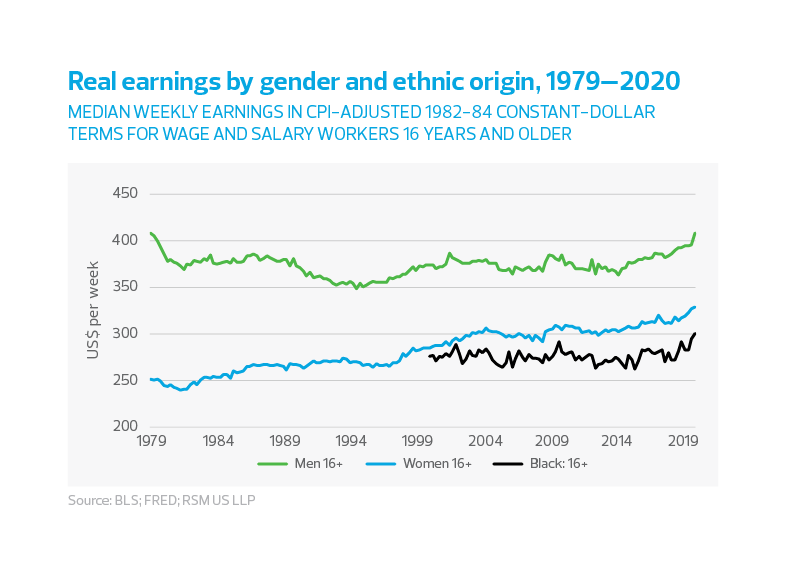 FIG. 6: Average annual growth rates of real earnings of wage and salary workers since 1979 and 2000 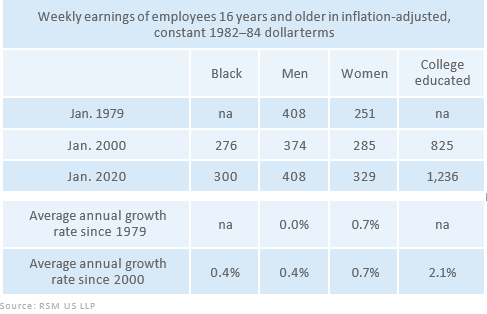 Since the decline of trade unions in the 1980s, many of the manufacturing jobs that men lacking higher education could do have been lost due to the integration of advanced technology into the production of goods or provision of services now occurring in lower-wage areas of the global economy or in states where unions have little power.

Weekly wages of women have been rising at a steady clip of 0.7% per year and now stand at 80% of their male counterparts. The wage inequality of African Americans, however, even compared to blue-collar American workers overall, is more pronounced. Black men are paid just three- quarters of the earnings of male employees overall. Data collected on wages since 2000 implies that Black workers’ real earnings have increased by 0.4% per year, keeping pace with white males, but still largely stagnant.

Gains made by the labor force during the 2010–20 economic recovery—and the expansion of opportunity that went with them—are at risk of being reversed by the coronavirus shock. If the economic shutdown drags on, with short-term layoffs leading to further automation, or businesses simply doing more with less, we expect the labor force to shrink as the ranks of the unemployed become more and more discouraged.

Labor force participation grew from the 1960s through the end of the 1990s as the U.S. manufacturing and service sectors expanded, and women entered the workforce in significant numbers. The participation rate peaked at the end of 1999, as manufacturing was pushed offshore, but began to recover in 2014 as the economic recovery from the Great Recession took hold and the service sector gained the dominant role in the U.S. economy.

In short, the American condition, no matter how one measures it, inevitably hinges on jobs and wages. Employment inequality between Black and white Americans is a real concern. Civil unrest in 350 of the 390 major metropolitan areas of the United States is not only a function of demands for social justice, but of the economic frustration driven by longstanding differences in income and wages.