Economics of a global health crisis

Global economic markets’ reaction to China’s coronavirus has been severe, resulting  in a significant safe-haven move into U.S. government securities by international investors. Whether the virus has a lasting impact on the broader global economy depends largely on the ability of the world’s major governments to effectively deploy resources to contain the outbreak.

The decline in the yield on 10-year U.S. government securities of 41 basis points and the loss of more than $2 trillion in global equity valuations are emblematic of rising uncertainty around how the health crisis will affect the global economy. It is clear that the Chinese economy, which accounts for roughly 16% of global gross domestic product, will not reach its official growth target of 6% in the first quarter of 2020. Just as important, given the size of the unfolding supply shock to the Chinese domestic labor market, profound second-order effects across the demand landscape will negatively impact the service sector and will likely reduce investment and orders across supply chains from North and Southeast Asia to Australia. China’s central bank injected a net 150 billion yuan ($21.4 billion) into domestic markets on Monday in a move to offset damage to the economy. 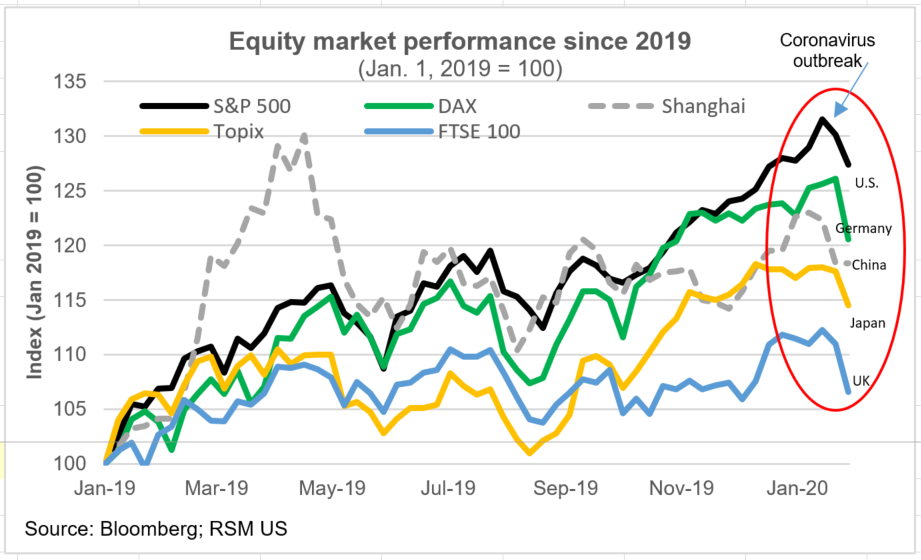 The data around the initial outbreak imply downside risk to China and its economic archipelago. Compared to the 2002-2003 outbreak of Severe Acute Respiratory Syndrome, known as SARS, when China accounted for roughly 4% of global GDP, it appears there is potential for a large domestic and negative economic impact. Given the significant increase in Chinese wealth and health care infrastructure, the state should economically be able to address the outbreak in the near term.

The major concern of the World Health Organization is the potential for the coronavirus outbreak to jump to economies lacking the wealth and medical infrastructure to address a health emergency. WHO scholarship implies large and variable losses between 0.3% and 1.6% linked to epidemics and pandemics based on the relative wealth of any given economy. That is likely the difference between the current epidemic in China, and a potential global pandemic. Unless the epidemic turns into a pandemic with a greater negative impact via the financial and trade channels, we do not anticipate any material economic impact on the United States, Canadian, UK and European economies due to the sophisticated medical infrastructures that underscore those economies.

As of Monday, there were more than 17,000 confirmed cases globally of the coronavirus (2019-nCoV)–the majority in China–and 361 deaths, all in China, except one in the Philippines, according to the World Health Organization. Bloomberg News has noted that 16 Chinese cities, impacting 48 million individuals, have put in place significant restrictions on movement representing an endogenous supply shock that will negatively impact Chinese economic activity. It is important to note that this is an epidemic and not a pandemic.

The worst public health disaster in recent history was the outbreak of the 1918-1920 influenza pandemic that afflicted up to 500 million individuals and killed a minimum of 50 million people. Research by the St. Louis Federal Reserve Bank indicates that this pandemic, known colloquially as the Spanish flu, shaved $800 billion from global GDP, which was just $1.7 trillion in 1920. The economics of public health crises strongly suggest that we are nowhere near that type of catastrophe.

Huabei is the home province of Wuhan, ground zero for the outbreak, and accounts for 4.5% of Chinese GDP. Given that there are currently 16 large cities across China the size of Chicago with populations facing house detention, the math here is fairly straightforward. Second-order effects around consumption of transportation, tourism, finance and retail will be large and variable. An early assessment by our colleagues at Goldman Sachs estimates a 0.4% drag in 2020 growth in China. Wells Fargo projections imply a 0.2% to 1.0% reduction in 2020 growth, with the majority clustered in the first 90 days of the year, depending upon whether there is containment of the virus or a global outbreak. Given the expansion of the virus, and more stringent measures imposed in Beijing and Hong Kong, that forecast would appear to be optimistic. 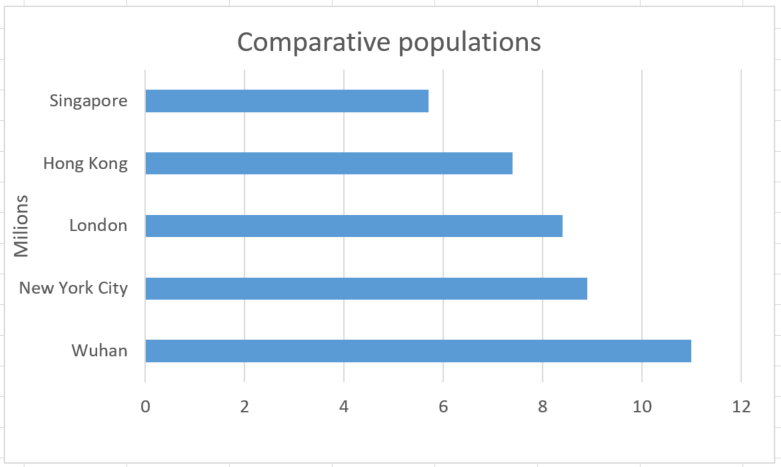 What is certain is that the Chinese economy is going to grow at a pace far less than the official 6% target through the first 90 days of 2020. More difficult to ascertain is the regional economic impact and damage to a domestic system of finance already strained by escalating defaults and bankruptcies. The unfolding endogenous supply shock and large first- and second-order effects will not mitigate the strain in the country and the region.

The endogenous shock China’s economy is absorbing needs to be put in context. Wuhan is a large city that houses roughly 11 million individuals, compared to New York’s 8.9, and London’s 8.4 million. At a minimum, 48 million people are facing government-imposed house detention and likely millions more are engaging in self-imposed quarantine. In fact, roughly 880 million individuals may choose to refrain from economic activity over the next week; one gets the sense that the supply shock and second order-effects of the virus via demand are going to be much larger than initial estimates imply. Up to two-thirds of the domestic Chinese economy could be impacted.

Economic uncertainty about how the outbreak will affect global economic uncertainty demands a transparent and replicable economic framework. Supply shocks, supply chains, first- and second-order effects, as well as the transmission channels of finance and trade, are the analytical framework that facilitate a rational discussion of economic and financial impact. Epidemiological uncertainty about the severity of the disease and how many people will be infected should be left to scientific experts. 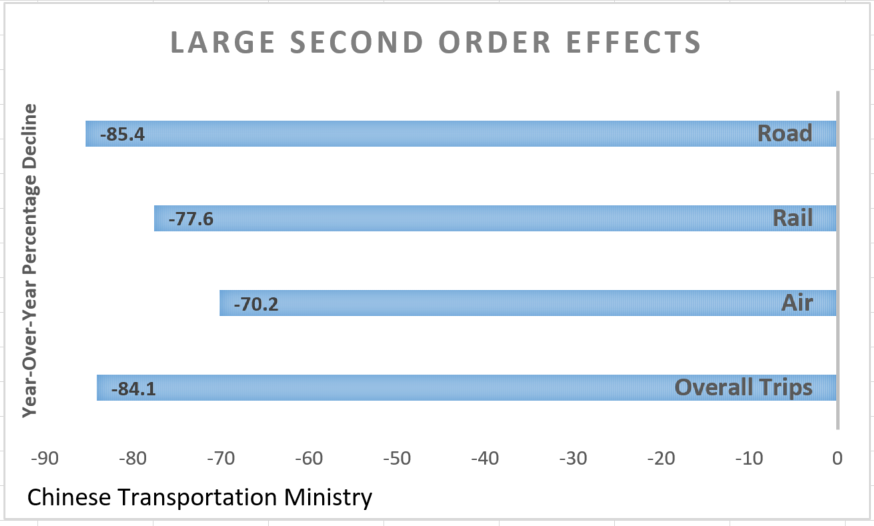 When thinking about the possible economic impact of the coronavirus, it is necessary to first identify how large is the supply shock; and next, what are the second-order effects. Supply shocks tends to be clustered around individuals not working. Second-order effects focus on consumers pulling back from normal spending activity impacting retail, finance, transportation and tourism.

Currently in Beijing, the government is telling citizens returning from the Lunar New Year holiday to work at home until at least Feb. 10. Chinese-based clients and global operators that produce in China report they are shutting down production until the first week of March and postponing scheduled services. Such are the linkages of the globalized economy from which many businesses are connected directly or indirectly through the production of goods, provisions of services, shipping, transportation and finance.

Once one has an idea of the size of the supply shocks, then one must look at channels through which those second-order effects travel, with the most important being trade and finance.

The financial channel waits for no one. The reaction globally over the past two weeks has been swift and fierce, and it shows no sign of abating. The impact has been on vivid display over the past three weeks, most notably in the drop in U.S. yields along the maturity spectrum and the inversion of the policy-sensitive 10-year three-month yield curve often associated with elevated levels of recession risk. The U.S. S&P 500 index has declined by 101 points since hitting an all-time high Jan. 17, 2020, the German DAX has dropped 2% and Hong Kong’s Hang Seng is down 6.6% over the past two weeks. The price of soybeans is down 7.48% and copper prices are off 10%; both are bellwethers of global trade and commercial activity.

The sharp downward movement in prices will place lateral pressure on the implementation of the recent United States-China trade agreement. The drop in soy prices may make it difficult for China to meet the targets embedded in phase one of the pact. The price drop in copper, considered a barometer of demand for housing and commercial construction, surely reflects investor concerns over the pace of demand for commodity imports from China, the world’s largest importer. If this financial channel continues to transmit volatility into and across global asset markets for the next few weeks, investors will begin clamoring for concerted action by global central banks. Right now investors have fully priced in 50 basis points of rate cuts by the Federal Reserve this year, a sign of elevated risk around the economic outlook.

If the financial channel foreshadows a slower period of economic growth ahead, it will be captured in the trade channel. One early forward-looking metric of trade, the Baltic Dry Index—which measures the price to ship raw materials—has declined sharply over the past three weeks, implying there will be a sharp decline in exports to China. Rates for giant capsize shipping used to ship raw materials at earlier stages of production have dropped below $4,000 per day. One would presume the large commodity-exporting economies like Australia and Brazil, as well as the emerging economies in Southeast Asia, will endure most of the adjustment to reduced demand from China. However, that is only a glimpse for forward-looking investors and policymakers of the potential impact via the trade channel. It may be more than a month before hard data reflects the full impact. 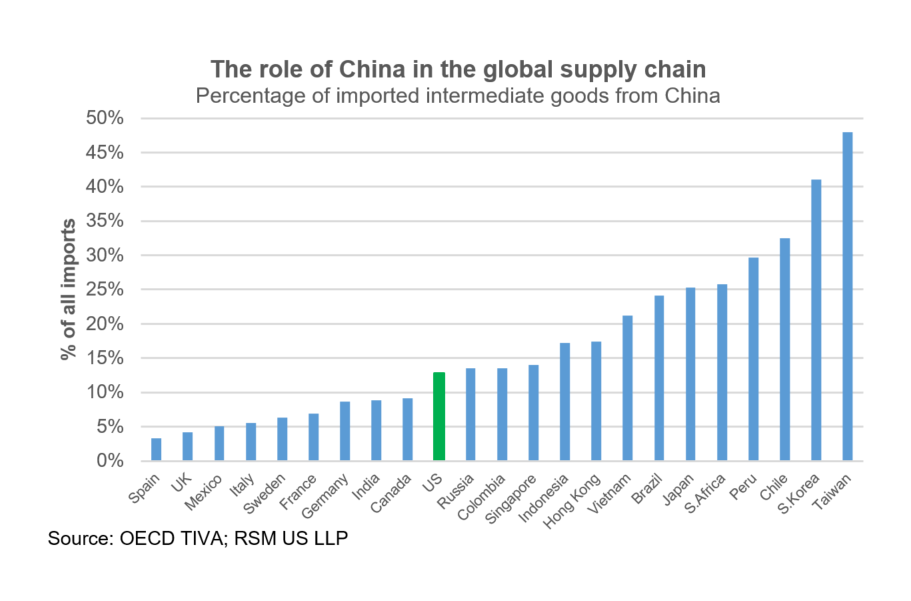 When estimating economic losses linked to epidemics or pandemics, one typically looks strictly at income loss. A different approach was put forward by economists Lawrence Summers, Victoria Fan and Dean Jamison in a recent World Health Organization brief. It suggests using an expected loss framework that extends loss assessment to include a valuation of lives lost as a result of the increase in mortality resulting from pandemic risks.

This approach implies a large economic impact over the medium- to long-term resulting from an estimate that includes information on risk around such events using information on the severity or value of that event. The work states that if one applies an expected loss framework to the 2013-2016 Ebola virus outbreak that caused 11,300 deaths, compared to the 1918 Influenza pandemic, the impact might be 2,500 times higher comparatively.

This viewpoint implies an expected loss function of gross national income from 0.3% to 1.6%, with the large impact occurring in countries with relatively underdeveloped or emerging economies. It is commonly uses by insurance companies, and may provide direction for policymakers considering how to model risk around the increasing probability of climate or health events. The best scholarship implies that the mitigation of public health emergencies such as the one the global economy is now absorbing takes roughly 27 years.

Until 2014, the United States spent less than $500,000 annually to address growing microbial resistance to antibiotics; government data shows this resistance results in the deaths of 63 Americans a day. If global policymakers want to avoid economic dislocation such as the $40 billion hit in 2003 associated with SARS, or the $5.4 billion in spending the U.S. put forward in 2015 to fight the Ebola virus, they will have to step up monetary outlays to fight such events. The data collected over the next several weeks and months will provide an unfortunate natural laboratory that will need to be integrated into a coherent global effort to offset the likely increasing probability of such events.