Confidence in the Fed, but uncertainty over long-term growth

The result has been a 100-basis point increase in the yield on 10-year Treasury bonds, which have increased from just under 2% to nearly 3% in a little more than 60 days. If rates do not stabilize in the near term, we will have to lift our provisional forecast for the 10-year Treasury to end this year at 2.95%.

The initial impetus for the policy shift was the growing strength in an economy now able to support higher interest rates and the gradual deflation of asset bubbles that formed during the low-for-long interest rate policy during the trade war and the pandemic. 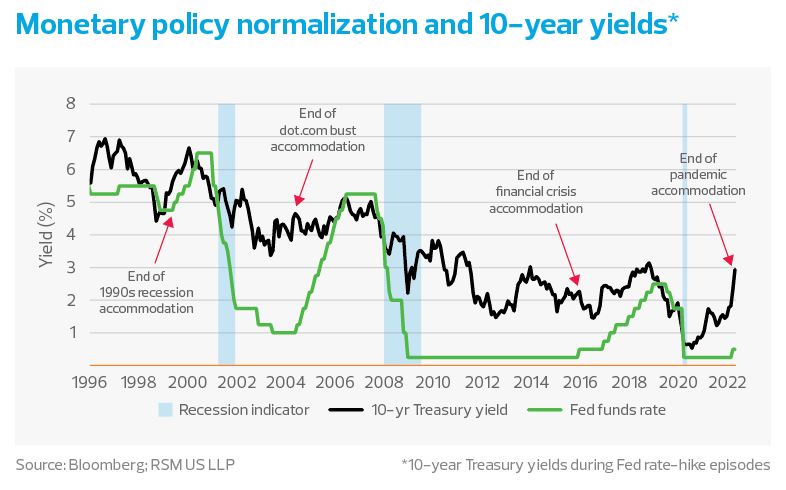 Because of the persistence of inflation, the bond market now anticipates an acceleration of Fed rate increases and a drawdown of the Fed’s accumulation of long-term Treasury bond purchases.

We anticipate 50 basis-point increases in the policy rate at both the May and June meetings and the central bank to draw down its balance sheet by roughly $3 trillion over the next three years.

In our estimation, the expectations of rate hikes and the Fed’s emerging balance sheet strategy have resulted in the shape of the 2-10 yield curve, which now has a positive upward slope after inverting in early to mid-March.

For the time being, the increase in the bond yields along the curve is attributed to expectations of increases in the path of short-term interest rates as the Fed normalizes rates.

But the decrease in the term premium—the compensation for the risk of holding a bond over its maturity—signals concern for long-term growth. This concern is most likely because of the Fed action to slow the economy to constrain inflation and the risks presented to the global economy by Russia’s invasion of Ukraine.

Model-based estimates of inflation expectations point to inflation rates less than 3% in 12 months and 2.3% in 10 years, which roughly conforms to consumer expectations of 3% inflation over the next five to 10 years and expectations derived from the forward markets.

This speaks to the confidence of the public and the markets in the Fed’s ability to control inflation. 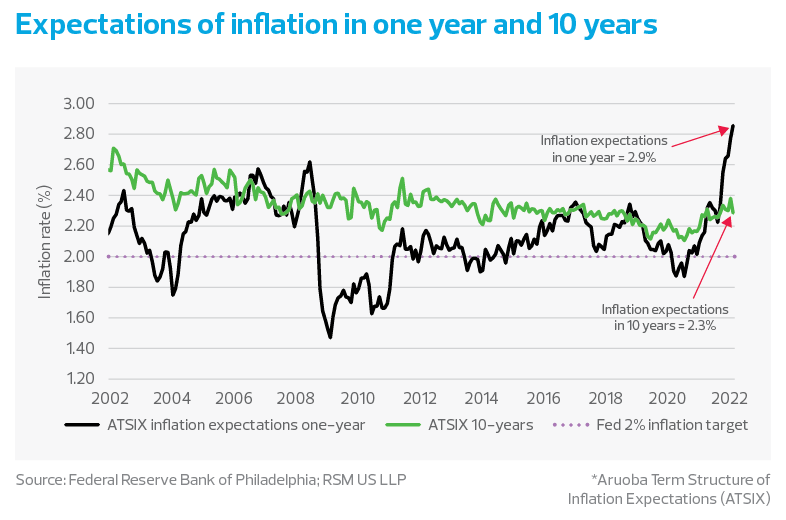 It is important for the Fed to restore normal levels of interest rates to extend the range of future policy options and to restore balance among the returns in the financial markets. But the sharp increase in 10-year Treasury yields from 2% to 3% might better have occurred more gradually and under less stressful circumstances. 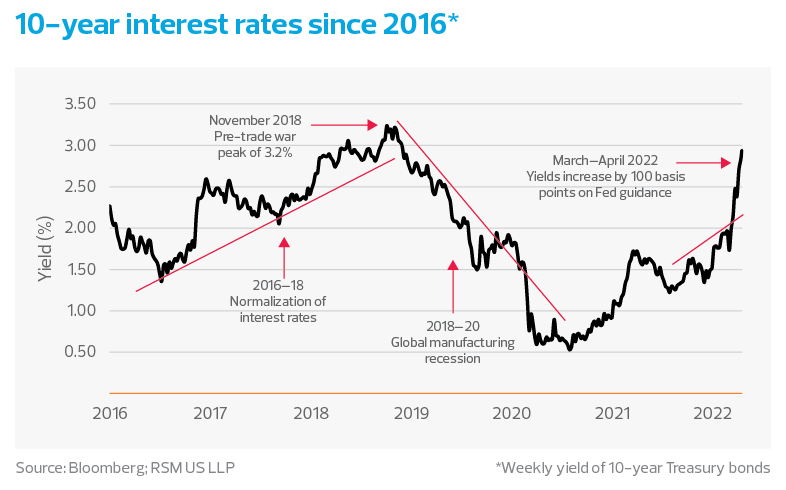 The persistence of inflation because of past policy, continued shortages of energy and housing, and the war in Ukraine required a swift response from the world’s central banks.

Because of the sharp increase in inflation, real yields remain negative across all maturities despite the increase in nominal yields. This implies a level of accommodation for long-term investors who will pay back the loans in deflated dollars. 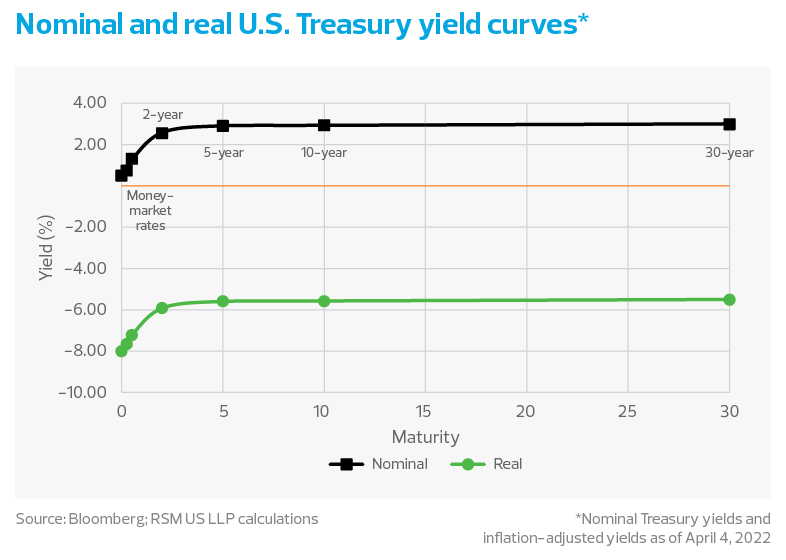 While the yield curve is no longer inverted, it remains too flat in our estimation, signaling uncertainty about the ability of the economy to support higher rates of return and to continue growing.

We expect growth to arrive at or below 1% in the first quarter, rebound strongly in the second and third quarters, and then be subdued as higher rates of interest and inflation affect the consumer sector’s propensity to spend.

You would expect 30-year bond yields to reflect the greater risk of holding a security over that length of time, with the prospect of event risk disrupting economic growth at some point. Instead, we find five-year Treasury yields rising above 30-year yields, and the yield spread becoming negative.

We attribute that to the absence of infrastructure spending, which was delayed until after the midterm election to get bipartisan support. As such, it may take at least another year for the bond market to assess the prospect of an economy more advanced than the stagnant, low-growth economy of the years before the pandemic.

The average mortgage rate calculated by Freddie Mac shows that new homeowners are facing a 5% cost of carry, substantially higher than the less-than 3% rates of the pre-pandemic era. We expect those rates to put a crimp in the demand for housing, which, because of its weight in determining the consumer price index, will have a large impact on the inflation rate. 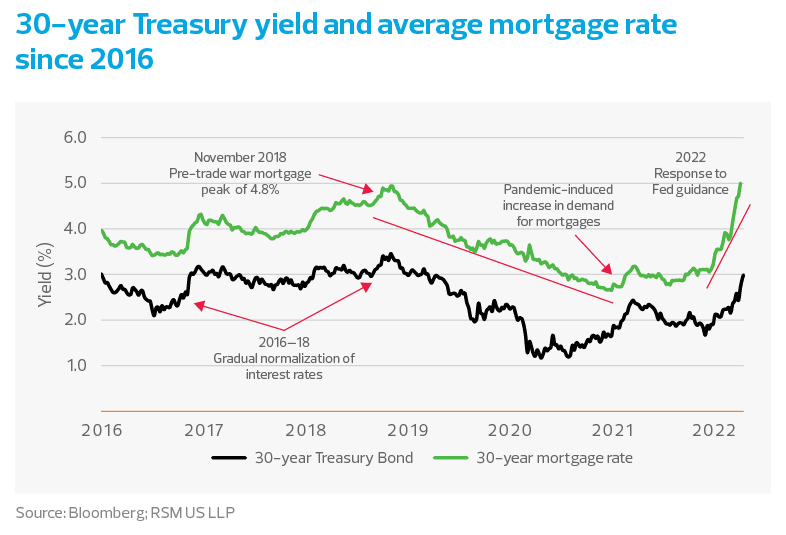 In addition, the 30-year fixed mortgage rate of around 5.5%, resting above the 30-year jumbo rate of 4.4%, will almost certainly cool demand for housing for anyone who cannot or is not willing to put down more than 20% to purchase a home.