Can a price cap on Russian oil work?

The United States is urging its trade partners to adopt a novel proposal that would put a cap on the price of Russian oil during a time of shortages in global production.

Treasury Secretary Janet Yellen’s proposal is a creative idea, but it carries risks and could result in another surge in oil prices. Middle market firms need to understand these risks as they plan for the second half of the year.

The proposal has three objectives:

To achieve the objectives, the policy would create a purchasing cartel that would limit the price of Russian oil to, say, around $40 per barrel, while not completely cutting off the flow of oil out of Russia.

But that still leaves the question of enforcement—or how to prevent Russia and other nations from getting around the cap.

The answer lies in insurance. The United Kingdom and the European Union insure somewhere between 85% and 90% of Russian oil exports. Together with the United States, they would refuse to permit the insurance of any ship that transports Russian oil priced above the cap.

The U.S. government estimates that oceangoing transport ships move roughly 70% of Russia’s 5.6 million barrels a day of crude exports, with the rest sent through pipelines to Europe and China.

One approach to limiting Russian oil revenues would be to apply significant tariffs. But India or China would resist such tariffs because of the economic damage they would cause. That leaves the price cap, along with the insurance limitation, as the most viable way to limit Russian oil revenues.

Without insurance, it would become almost impossible for Russian oil to be transported. But the approach carries risks:

Analysis by the Federal Reserve Bank of New York found that increases in oil prices are currently more a function of anticipation of limited supplies than overwhelming demand. The analysis found that excess supply became a significant driver of oil prices in 2012 and generally dominated price dynamics after 2014.

In the latest period, the analysis found that anticipation of decreased demand in the second quarter of 2022 was offset by expectations of a greater decrease in the supply of oil. By our calculations, that resulted in the futures price of Brent crude oil increasing by 9.5% from March 31 to June 28. 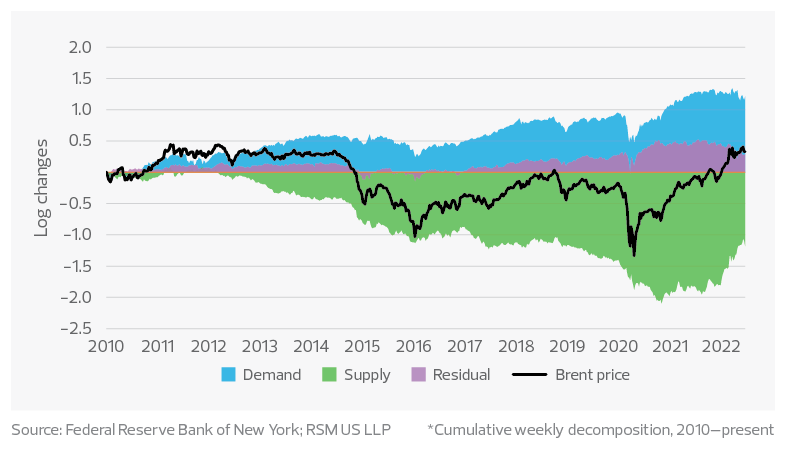 Given the response of the West to the invasion of Ukraine and Russia’s threats to cut off energy supplies to Europe, the relative importance of limited supplies of oil should come as little surprise. But in terms of policy debate, the root cause of high oil prices and their effect on the inflation rate need to be accurately portrayed.

For example, recent news reports suggest that OPEC can simply turn on its pumps to counter the withdrawal of Russian supplies. Even if geopolitics were to allow production to increase, Reuters now reports it might be wishful thinking.

Saudi Arabia and the United Arab Emirates were recently considered to have excess capacity. But the UAE’s leader, in recent statements he later discounted, said not only that the Saudis are approaching their production limits, but also that UAE production is maxed out. Libya says it might suspend exports because of its political crisis, and Ecuador’s labor strife threatens to shut down that country’s production.

This would not be the first time oil abundance has been a trending topic. Before the shale revolution, the debate in the early 2000s centered on “peak oil,” a theory that the world was fast running out of a finite resource.

More to the point, the concern was that peak oil supplies marked the end of cheap oil. As noted in 2014, oil is a most efficient source of energy, with a liter of diesel capable of moving tons of matter great distances at a cost of less than a cup of coffee.

This brings us to policy alternatives and choices, whether or not the global producers have reached a peak. The current oil crisis is only the latest brought on by a shortage of supply.

The need for fossil fuels will be around for some time. It’s hopeless to think that the West could transition to alternate sources of energy overnight without some cost to the economy or the population. Neither could it sufficiently mitigate the demand for liquid fuels to bring down the price of energy.

Is there a policy that allows for market-based pricing of energy, with multiple sources of energy competing for market share?

As the market is set up now, oil can be extracted from a limited number of fields, with Russia one of the dominant producers. While the West hoped that Russia would join the Western alliance of market-driven economies, that’s no longer realistic.

OPEC is now OPEC Plus, which includes Russia. With the supply of oil regulated by fiat or by physical restraint, price signals remain constrained.

The proposal to place a cap on the price of Russian oil would have a direct positive effect on large Russian clients like India and China while reducing Russia’s receipts.

In effect, that would set up a two-tiered market, with prices in Asia determined by the alliance of developed economies, and prices in the West determined by the interaction among private suppliers and consumers. But as with any market interference, there are bound to be unintended consequences.

Private investment and the reintroduction of risk
Did fiscal spending go too far?
Middle market tech investments increase, but what should they target?
The post-pandemic era and the end of hyper-globalization