The prospect of Britain’s departure from the European Union has created uncertainty in the economy and volatility in financial markets. Disruptions to the UK supply chain—a system built over decades within a European common market—will ultimately create losses for consumers through higher prices and diminished consumption choices.

RSM has developed the RSM Brexit Stress Index to measure Brexit’s impact on UK economy. The index is composed of six financial variables whose weekly performance indicates the market’s assessment of Brexit on trade, wealth, the business cycle and corporate profits. The RSM Brexit Stress Index tightened for the week ended March 8 to 0.7 standard deviations above neutral from 0.5 above neutral the week prior; however, it is important to note that the index has declined from over 2 standard deviations above neutral in December, mostly due to financial markets pricing in a reduced probability of a hard exit from the European Union. This implies that economic and financial risks around the policy choices to be made over the next few weeks have eased. 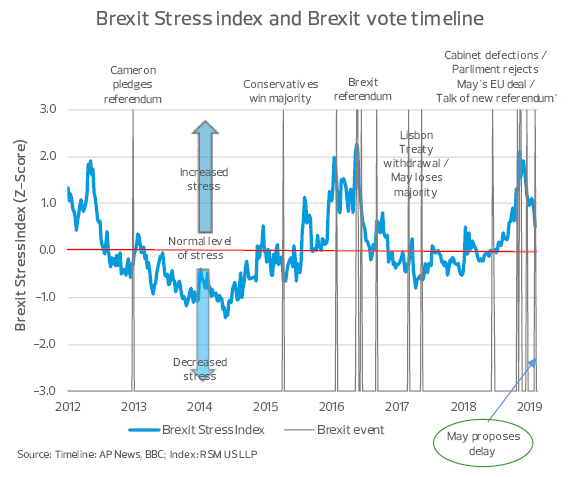 A brief history shows the index moved higher in the run-up to the 2016 Brexit referendum, moved lower in the long period of negotiations and preparations thereafter, and then spiked higher as consequences of an exit from the common market became real.

The following variables make up the RSM Brexit Stress Index:

Expectations for foreign trade (via the currency market)

Expectations for the business cycle