Americans earn more than before the pandemic, even after inflation

Even as prices have soared in recent months, American workers are earning more than they did before the pandemic as the overall gains in their wages have outpaced inflation over the past two years.

The real average hourly wage rate in December—which is adjusted for inflation and is an indicator for purchasing power—was 2% above the pre-pandemic level, according to the most recent data from the Bureau of Labor Statistics.

As the economy rebounds from a once-in-a-lifetime crisis, robust demand—induced by aggressive fiscal and monetary policies—has driven the rapid recovery of the labor market, which recorded the strongest year of job creation on record in 2021.

To put the recovery of the labor market in perspective, consider it took about eight and a half years following the financial crisis for the unemployment rate to decline to 3.9%, while it took less than two years following the shock of the pandemic.

And there are signs that workers will continue to benefit from the growing economy. The labor market is near full employment and the quit rate is at a record high—the perfect recipe for wage gains to remain strong.

To be sure, the impact of the omicron variant remains an open question, and it is only beginning to show up in the labor market. But if anything, its spread is likely to reinforce trends that are already in place.

We expect real wages to rise even higher this year as inflation will most likely ease in the second half of the year and companies plan for the biggest pay jump in a decade, according to The Conference Board. At the same time, workers in 21 states will have a raise in their minimum wage. 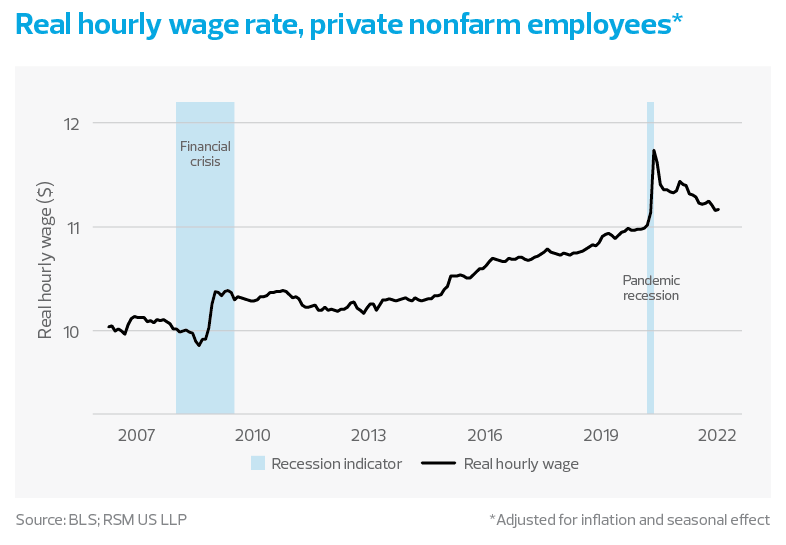 During a normal recession, when overall demand plummets, the inflation rate also declines sharply. As inflation reaches negative territory at a rapid pace—which happened during both the steep yet short-lived pandemic recession in 2020 and the financial crisis of 2008 and 2009—the real average hourly wage rate quickly peaks because wages do not decline at the same pace.

Once the recession is over, inflation starts to pick up as demand recovers, pushing the real wage rate down, which is what happened in the last two business cycles.

The difference between the two periods, however, is that the dip in the real wage rate following the financial crisis was smaller than what it was after the pandemic recession. It is the same reason why it took less time for the unemployment rate to recover after the financial crisis: a slower demand recovery rate.

So even though hourly earnings fell at an annual rate of 2.4% in December, that comparison is misleading because it is being compared to December 2020, when economic restrictions were still in place. A better comparison for wage gains should be between the current wage rate and pre-pandemic wage rate, especially when the labor market conditions were more similar.

Not all industries have experienced the same level of wage growth. Most private service industries continued to have increasing real wage gains compared to the pre-pandemic level in January 2020.

The largest pay jump after adjusting for inflation comes from the leisure and hospitality sector, which has the lowest real average hourly wage rate at $6.98. It is not a coincidence: This sector has been the hardest hit by COVID-19, causing businesses to raise wages to attract workers. 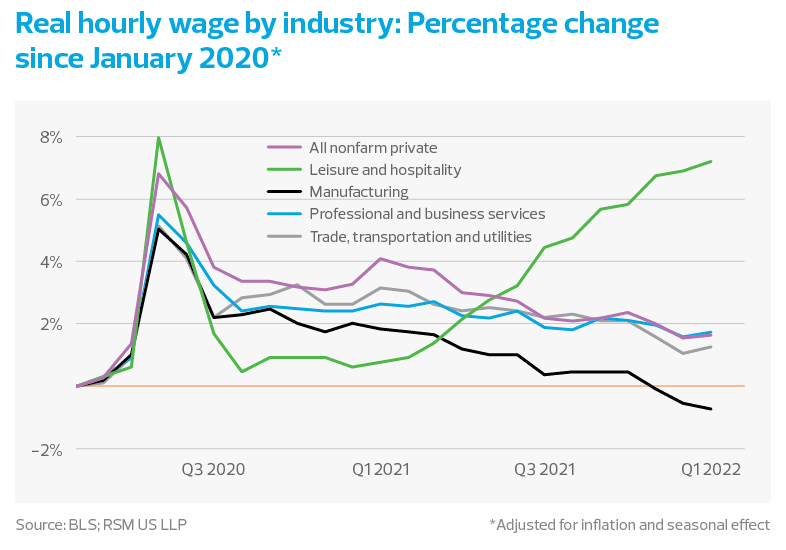 Higher-paid industries such as professional and business services, and financial services—which pay more than $13 an hour on an inflation-adjusted rate—also recorded strong wage gains in the past two years.

Goods-producing industries, on the other hand, have been under more pressure from inflation. The real hourly wage rate for manufacturing was down 1% in December compared to the pre-pandemic level. One reason might be that some businesses have turned to automation amid persistent labor shortages.

The different trends in wage gains across industries also point to the uneven impact of the labor shortages in different sectors because of the rapid transformation of the U.S. workforce during the pandemic.

With inflation expected to decline this year, the pressure on the average American's earnings from high prices will ease. That will continue to put workers in a much better position in a post-pandemic world as the likelihood of COVID-19 becoming endemic grows.