The economic distortions of the pandemic are becoming increasingly evident in the divergent fortunes of U.S. workers. At first glance, the news seems to be good: Hourly wages for nonsupervisory workers have been rising at a 4.5% year-over-year rate for the past five months, far above the 2.5% average growth rate over the past 10 years.

But a closer look shows that this increase is primarily a function of the reduction in force of low-wage workers, of whom 9.8 million are still out of work. This will result in a K-shaped wage environment next year where those workers with the capacity, skills and know-how to thrive in virtual environments will capture the lion’s share of wage growth during the initial phase of the recovery.

At the same time, workers in service-sector and entrylevel jobs will almost certainly face a restrained wage environment at best. The 6.6% decline in the Bureau of Labor Statistics’ Employment Cost Index for the third quarter and the 7.1% drop in real compensation are harbingers of things to come in select industries as the economy emerges from the pandemic. 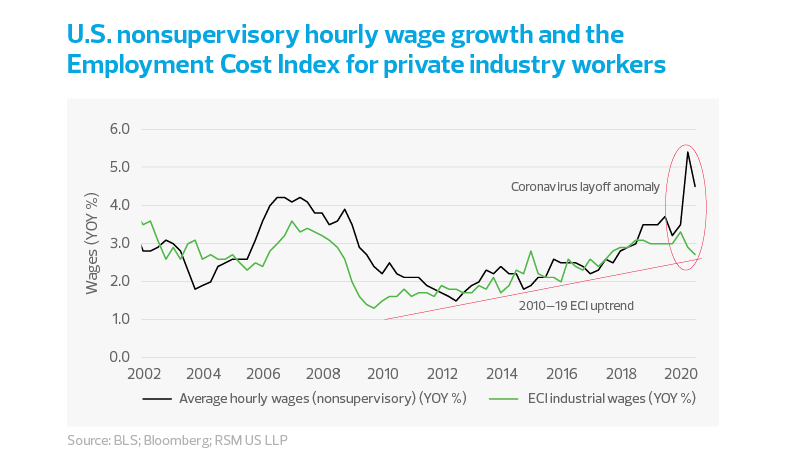 The last time wages grew this fast was at the tail end of the postwar industrialization period that ended with demise of unionization in the 1980s and the shifting of manufacturing to low-wage centers in the South and then overseas. Now, in the current era of automation, telecommuting and technology, many who work in the service sector will face increasing redundancy as labor is replaced by technology.

While we expect the output gap to narrow and the economy to return to its full capacity to produce by late 2021, full employment will not be a policy consideration until 2024 and the substitution of technology for labor will likely be one of the defining narratives of the next expansion. Though wages were rising on trend during the decade-long recovery from the Great Recession, much of this latest increase in wage growth can be explained by the pandemic.

As the coronavirus began taking its toll, corporations began furloughing low-wage and entry-level employees. Then as operations continued, the burden was left to the higher-wage, more productive, longtime employees. This almost certainly accounted for the 8% wage spike in April.

MIDDLE MARKET INSIGHT: This will result in a K-shaped wage environment next year where those workers with the capacity, skills and know-how to thrive in virtual environments will capture the lion’s share of wage growth during the initial phase of the recovery. 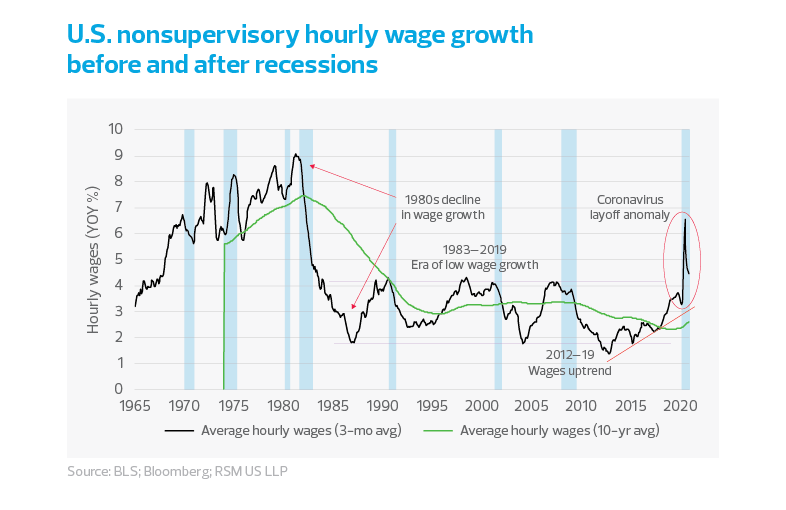 A decrease in the Employment Cost Index

In the months ahead, as extended health insurance benefits run out for furloughed employees, we would anticipate the downtrend in the Employment Cost Index to resume and continue for as long as it takes for the population to be vaccinated.

Moreover, service sector employees in leisure and hospitality, food and beverage, and retail are likely to face a flat wage environment at best and have their wages cut at worst as the service sector consolidates and reconstitutes over the next few years. 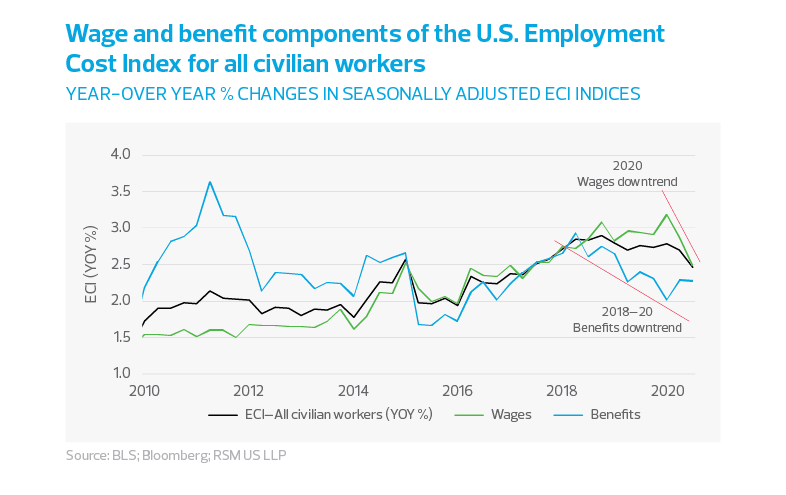