On June 25, 2021 the Australian Taxation Office (ATO) released draft tax ruling TR 2021/D4 Income tax: royalties – character of receipts in respect of software (the draft ruling). If finalized, the draft ruling will apply to transactions preceding and subsequent to the issuance of TR 2021/D4. The ATO also withdrew a previous ruling on computer software, TR 93/12.

The draft ruling describes the ATO’s views regarding the characterization of income from licensing and distributing computer software, and interprets the definition of royalty in section 6(1) of the ITAA 1936. The draft ruling acknowledges that the character of income from licensing and distributing software depends on the terms of the agreement between the parties, taking into account the facts and circumstances of the particular case. The draft ruling does not address how income should be characterized if it is not a royalty. However, it sets out certain guidelines to apply in conducting the analysis of whether a payment for software is a royalty or another class of payment. The characterization of a payment as a royalty under Australian domestic law is important for purposes of determining whether it will qualify for a reduction in the Australian rate of withholding under Article 12 of the U.S.-Australia Income Tax Treaty.

According to the draft ruling, a payment is a royalty under section 6(1) of the ITAA 1936 to the extent it is paid or credited as consideration for one or more of the following:

A license to an end user for the “simple use” of software under an End User License Agreement (EULA) is not characterized as a royalty under the draft ruling. End user license agreements have historically been used in conjunction with software downloads. However, they may also be used in conjunction with cloud-based software applications in addition to an end user service agreement. Software code (or source code) is protected under the copyright laws of most countries. However, not all payments for rights that are protected under copyright laws are characterized as royalties for tax purposes. Many countries make a distinction between the grant of rights that are limited to rights to use the software (such as a EULA granted to an end user) for which payments are not royalties, from rights to adapt, modify or reproduce for purposes of resale, which typically are royalties. The ATO ruling is generally in line with this approach.

One of the more significant aspects of the draft ruling is that it provides some parameters around the types of distribution arrangements that may create a royalty for Australian tax purposes, rather than a buy-sell arrangement, often with significantly different tax results. A distribution relationship that does not give rise to royalty income under the draft ruling could be viewed as a buy-sell relationship, or the distributor could be treated as a service provider/agent of the software developer, in which case the sales revenue may be treated as having been earned directly by the software developer and the distributor may earn a service fee for its distribution services. 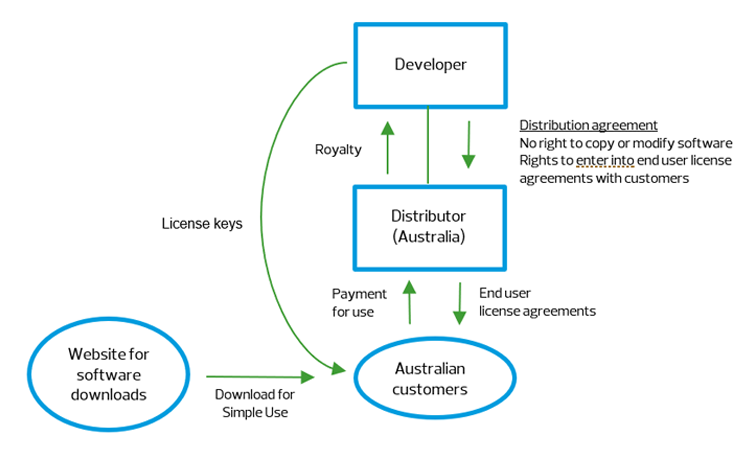 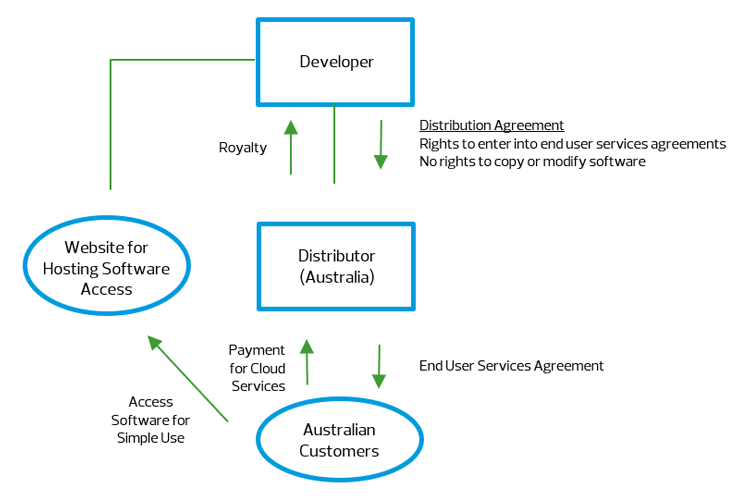 In contrast, if the EULA is entered into between the end-user and the copyright owner, bypassing the distributor, and the distributor is not granted rights to reproduce or modify the software, the distribution relationship would be less likely to give rise to royalty income. 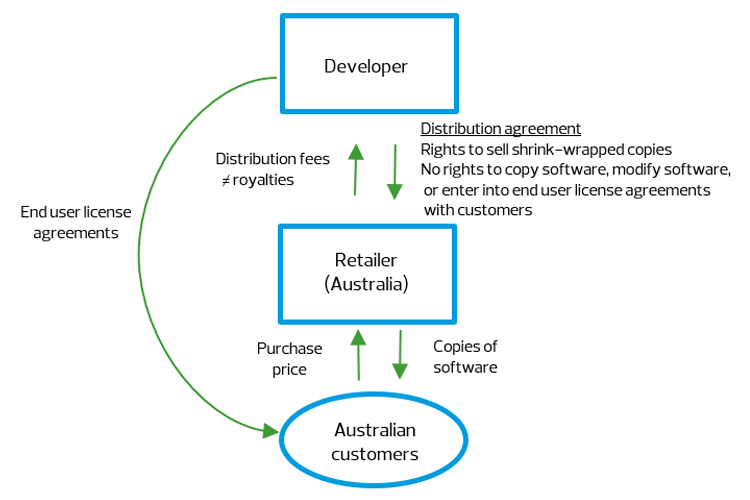 U.S. characterization of income from software

The U.S. framework for characterizing software arrangements is set forth in Treas. Reg. Section 1.861-18 (transfers of software including digital downloads) and Prop. Treas. Reg. Section 1.861-19 (cloud computing). Neither the Draft ruling nor the U.S. regulations would characterize payments by end users for simple rights to use the software as royalties, regardless of whether the software is obtained by means of download, accessed on the cloud, or transferred on a disk. The U.S. regulations are also similar to the draft ruling in that compensation for the grant of rights to copy, modify or adapt transferred software would normally be characterized as a royalty.

To determine whether a distributor has obtained a copyright right compensable to the copyright holder as a royalty, U.S. regulations look primarily to whether the distributor has been granted rights to make copies of the software for purposes of resale. This approach is consistent with the draft ruling. However, the draft ruling provides a more expansive interpretation of the types of distribution relationships that would result in royalties, and includes rights granted to the distributor to enter into EULAs. The regulations do not place any significance on whether the distributor is entering into EULAs. This discrepancy may result in inconsistent characterization of the distribution relationship for U.S. and Australia tax purposes.2 For example, where the distributor enters into EULAs with end users but does not engage in activities that could reasonably be construed as copying the software. Such arrangements may be viewed as giving rise to royalties for Australian tax purposes and as another class of income for U.S. tax purposes.

Inconsistency in the characterization of income from the distribution of software is not resolved by the 1982 U.S.-Australian Income Tax Treaty (the treaty), as amended by the 2001 Protocol. Article 12 (royalties) of the treaty does not provide a detailed definition of royalty that would override domestic U.S. or Australian law with respect to the characterization of this type of income. The term “royalties” is defined in paragraph 4 of Article 12 to include payments or credits of any kind for the use of or the right to use any copyright. The treaty does not expand on what is meant by “right to use any copyright.” Terms not defined in the treaty are given the meaning they have under the laws of the state that is seeking to tax the income, unless the context otherwise requires or the Competent Authorities of the contracting states have agreed on a common definition.3

Consequently, in the absence of a common definition agreed upon by the U.S. and Australian Competent Authorities, the type of treaty benefits that will apply to this type of income will often depend on whether it is the U.S. or Australia that is seeking to tax the income. For example, if a payment from an Australian software distributor to a U.S. resident that owns the copyright is characterized as a royalty under the domestic laws of Australia (including the draft ruling once it is finalized) but as sales revenue for U.S. tax purposes, the payment may be sourced to Australia for Australian tax purposes under paragraph 6(a) of Article 12, and the 30% withholding rate that applies to the royalty under Australian domestic law may be reduced to 5% under paragraph 2 of Article 12. A royalty that is attributed to a permanent establishment maintained by the taxpayer in Australia may be ineligible for the reduced royalty rate in Article 12. The taxation of the payment would be governed by Article 7 (Business Profits) of the treaty.

This is the case even though the payment is characterized as sales revenue under U.S. law and may be sourced wholly or partially to the U.S. under section 863(b) based on the place of production (the location where the software was developed and/or copied). In this situation, the U.S. resident may not be able to claim a foreign tax credit for the taxes paid to Australia, due to the section 904 foreign source limitation, unless the income is resourced to Australia under the Treaty. While not entirely free from doubt, it appears that the blanket resourcing provision in paragraph 1(a) of Article 27 (Miscellaneous) would generally apply to resource this income to Australia for purposes of claiming a foreign tax credit to offset U.S. tax and satisfying the section 904 foreign source limitation. See Treasury Department Technical Explanations to the Treaty, Article 27. The royalty source rule in paragraph 6(a) of Article 12 would not apply for U.S. tax purposes because the income is not characterized as a royalty under U.S. law.

If the reverse was true, and the U.S. was seeking to tax an Australian resident on income from software, the U.S. domestic law relevant to defining the transfer of copyright rights (including Treas. Reg. Section 1.861-18) would apply to determine the character of the income. As a result, if the payment is characterized as sales revenue under domestic U.S. law, the Australian resident’s U.S. tax on that income would be governed by Article 7 (Business Profits), not the royalty article. In which case, it may be taxed in the U.S. at ordinary statutory rates (not the reduced royalty rate under the treaty) but only if the Australian resident has a permanent establishment in the U.S. to which the sales revenue was attributable.

Choose from timely legislation and compliance alerts to monthly perspectives on the tax topics important to you.
Select your preferences now.