The changing consumer: Tighter budgets and a shift to services

As the economy reopened following the shock of the pandemic, the ensuing recovery has unleashed a surge in consumer buying power as wages have increased, government aid has landed in checking accounts and household savings have soared.

But as inflation continues to rise, reaching 8.5% in March, consumers are feeling a squeeze as they devote a larger percentage of their monthly budgets to meeting fixed costs like groceries, rent and energy.

Now, as the Federal Reserve raises interest rates and Congress reins in spending, middle market businesses are dealing with a new question: Are consumers still wielding that strong buying power to purchase goods, or has sentiment shifted?

What’s clear is that consumer goods companies need to adjust to a rapidly changing landscape where household budgets are tighter and consumers spend on services as the economy continues to reopen. 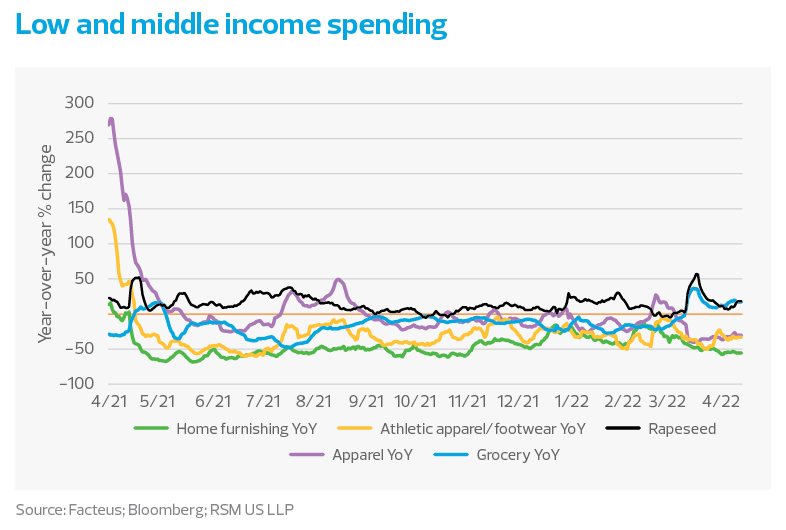 The impact of price increases

While consumers had largely overlooked price increases throughout the recovery, that has changed in recent months, particularly among lower-tiered earners.

Since March, low- and middle-income wage earners increased their spending on essential items like groceries and gas by an average of 12% and 17%, respectively, on a year-over-year basis, according to Facteus, an alternative data research company. Over the same period, purchases of less essential items like apparel and home furnishings declined by more than 25% each. While a portion of this decline is attributed to government stimulus, the increase in grocery and gas is notable.

In April, consumers continued to pull back on many nonessential purchases, including the decline in demand for nearly all nonedible categories, according to recent spending data provided through the IRI CPG Demand Index. In the most recent University of Michigan consumer sentiment readings, consumers indicated that they are less confident in their ability to absorb additional price increases; 40% view this as a bad time to make large household durable purchases.

Even with disposable income dollars above pre-pandemic levels, real disposable income has declined as inflation has eaten into discretionary dollars. Retail sales excluding food service, gas, building materials and motor vehicles declined each of the last two months, the first time this occurred since April and May 2021, according to U. S. Census Bureau data.

As these pricing pressures continue, consumers will most likely shift some buying preferences to more necessary and shelf-stable items, like frozen foods, pasta and private-label goods, to operate within established home budgets rather than spending on desirable goods.

As a result, consumer goods companies will need to rethink sales strategies to ensure they are providing value consumers are willing to spend on as a decline in sales volumes pressures companies to protect margins. 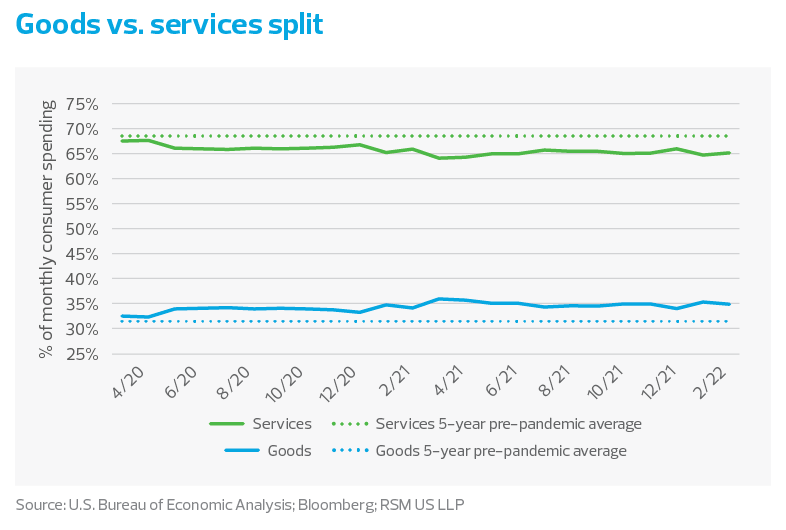 The shift to services

Another factor expected to affect consumers’ spending is the anticipated transition of spending on services like travel, dining out and events.

Since the start of the pandemic, goods purchases have accounted for on average 34% of wallet share, compared with the five-year pre-pandemic average of 31%.

Similarly, spending on services has accounted for on average 66% of consumer wallet share, down from the 69% five-year pre-pandemic average.

As states relax COVID-19 restrictions and the summer approaches, we expect to see consumer dollars shift from goods to services. In the latest consumer spending data available, service volumes had returned to pre-pandemic levels; however, goods purchases were still elevated from historical norms. 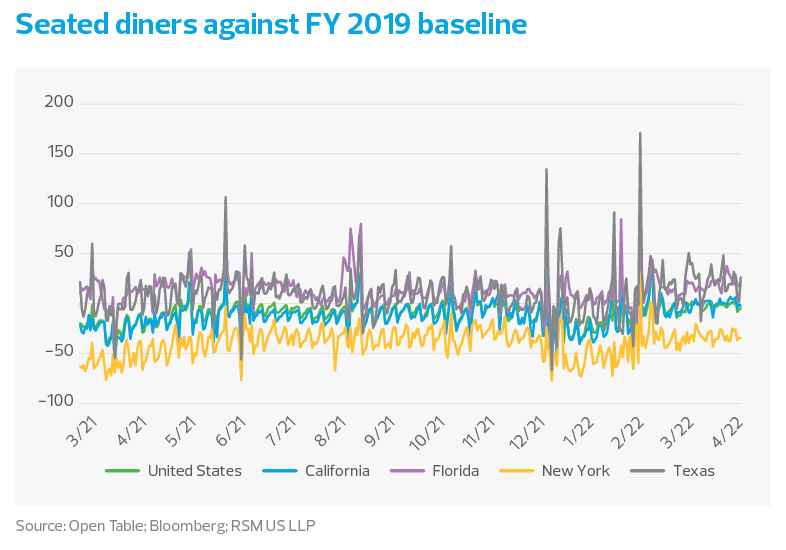 In the coming months, consumer goods companies will need to continue to evaluate what consumers are willing to spend on as budgets tighten in today’s inflationary environment.

Companies cannot operate as if last year represented a return to normal. We expect much of the spending that drove the strong financial performance of consumer goods companies to shift toward other areas like services this year and beyond.

As a result, consumer goods companies should ensure they are strategically positioned to take advantage of consumer spending habits and be nimble to protect margins.