CHICAGO – (September 8, 2022) – The RSM US Middle Market Business Index (MMBI), presented by RSM US LLP (“RSM”) in partnership with the U.S. Chamber of Commerce, increased to 138.5 in the third quarter, up 7.3 points from the previous quarter. The statistically significant increase in topline sentiment is indicative of strong overall activity and solid middle market business conditions, even as inflation remains elevated.

“An economy displaying such a robust reading, along with business conditions that have produced 3.4 million jobs over the first seven months of the year and unemployment of 3.5%, is not consistent with a recession,” said Joe Brusuelas, RSM US LLP chief economist. “This upside, however, is clearly tempered by elevated prices and rising wages that have likely soured firms’ outlook on the economy now and over the next six months. Even so, with revenues and net earnings still solid, and a majority of MMBI respondents indicating they should improve, the prospect of a recession has probably been pushed into 2023.” 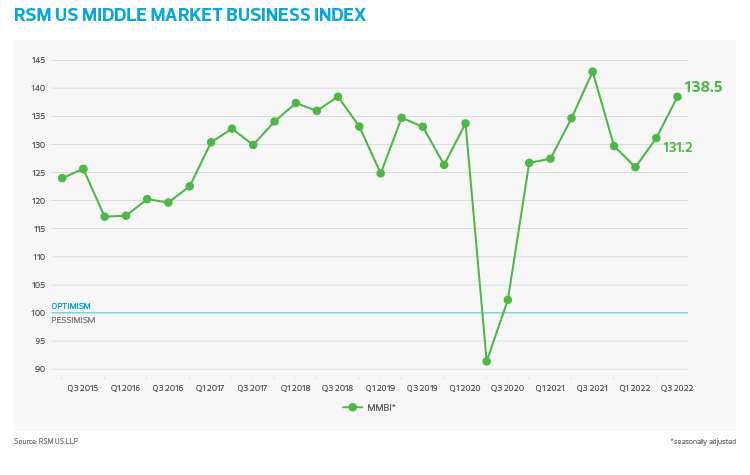 Cautiously Optimistic Business Sentiment in the Middle Market
Despite two consecutive declines in quarterly gross domestic product in the first half of 2022, business conditions appear impressively resilient when looking ahead. While 48% percent of the surveyed middle market executives said gross revenues increased in the current quarter, 60% stated they expect them to improve over the next six months. Half of the survey participants also stated net earnings improved in the third quarter, with 59% indicating they expect improvement in the near term.

Only 30% of survey respondents stated that the economy improved in the current quarter and only 39% expect it to improve over the next six months. RSM attributes this sentiment among middle market executives to wage increases and higher input prices.

“This quarter's index is a strong indication that companies continue to feel good about their own business operations, despite persistent negative attitudes on the overall economy,” said Neil Bradley, executive vice president, chief policy officer and head of strategic advocacy at the U.S. Chamber of Commerce. “Inflation challenges remain top of mind, and as labor costs continue to push up, we're going to continue to see these inflationary pressures in the economy.”

Wages and Tight Labor Continue to Pressure
In service-providing industries, which have an outsize presence in the middle market, rising wages are the primary source of inflation and will continue to weigh on business decision-makers. Reaching a record high, two in three survey respondents reported increasing employee compensation in the current quarter. Surveyed executives did not expect a change in near term hiring levels, despite a significant increase in hiring in the current quarter.

Nearly six in ten (58%) respondents reported an increase in staff over the last three months, the highest share on record. In contrast, those reporting a reduction in head count hit a 3-year low in the third quarter.

Survey responses around capital outlays are a source of continued optimism in the middle market, as investments in both technology and people are critical to boost efficiencies and output during a period of tight labor supply and high inflation. Forty-one percent of surveyed executives increased productivity-enhancing capital expenditures during the third quarter, and 53% indicated they expect to do so over the next six months.

When asked about inventories, 48% of executives said their organizations increased levels during the third quarter. Fifty-five percent indicated they plan to increase inventories in the near term, reflecting both the upcoming holiday season and the need to meet still-brisk demand for goods and services. RSM anticipates that upper-income consumers will retain the capacity to clear those levels, but businesses with exposure to down-market households should take a cautious approach to inventory management as inflation remains elevated.

The survey data that informs this index reading was gathered from 407 respondents between July 5 and July 26, 2022.

About the RSM US Middle Market Business Index
RSM US LLP and the U.S. Chamber of Commerce have partnered to present the RSM US Middle Market Business Index (MMBI). It is based on research of middle market firms conducted by Harris Poll, which began in the first quarter of 2015. The survey is conducted four times a year, in the first month of each quarter: January, April, July and October. The survey panel consists of approximately 1,500 middle market executives and is designed to accurately reflect conditions in the middle market.