Accelerating shift in consumer spending from goods to services indicates sustained strong activity in the middle market, though sentiment around business conditions is divided

Accelerating shift in consumer spending from goods to services indicates sustained strong activity in the middle market, though sentiment around business conditions is divided

CHICAGO – (June 6, 2022) – The RSM US Middle Market Business Index (MMBI), presented by RSM US LLP (“RSM”) in partnership with the U.S. Chamber of Commerce, increased to 130.6 in the second quarter of this year from 126.3 in the previous quarter. Business conditions in the middle market remained robust, bolstered by solid demand and strong productivity-enhancing business investment, despite underlying inflationary pressures.

“The MMBI results show that overall business conditions in the middle market are picking up, indicative of the underlying strength of the economy,” said Joe Brusuelas, RSM US LLP chief economist. “The most significant issue is whether the economy can absorb further inflation. Price stability is now the major policy objective in Washington, and the federal funds rate is likely to finish the year in restrictive terrain near 3%. Movement into restrictive terrain will result in a slowing of overall growth even as demand remains solid, which should provide some relief from the pricing pressures that dragged down the forward-looking components of this index.”

Despite the risks to the economic outlook linked to inflation, supply chain disruptions and the energy price shock, RSM expects gross domestic product to expand by 2% for the year, a deceleration from last year’s 5.7% growth. 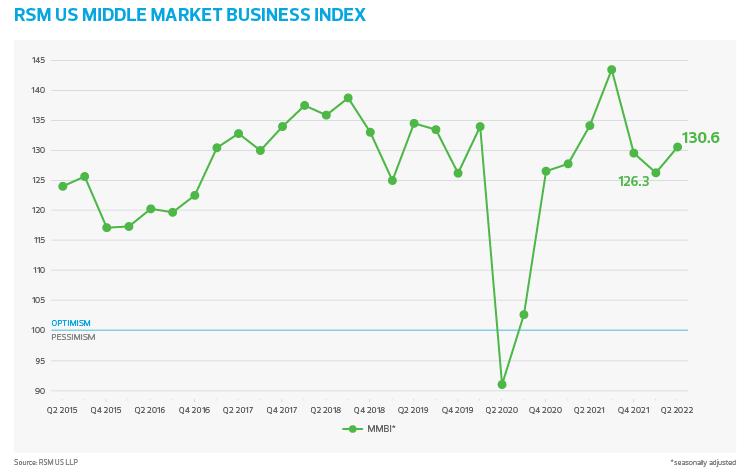 Demonstrating sustained strong activity in the middle market, 44% of the surveyed executives said gross revenues had increased during the quarter and 41% reported net earnings had improved during that time. These figures are little changed from the first three months of 2022, though a smaller share of executives reported decreased sales and profit for the current quarter than they did during the first quarter. Three out of five executives (58%) said they expect gross revenues to improve during the next six months, and 56% expect net earnings to do the same.

The survey results show that middle market executives have divided views on whether the economy improved, remained the same or deteriorated in the current quarter, and RSM expects this sentiment to remain split until there is clear evidence of a return to price stability. Looking ahead, only 42% of executives said they expect the economy to improve over the next six months, which represents the smallest share of executives with an optimistic outlook on the economy since 2020.

"Middle market companies are experiencing the same challenges we are seeing across companies of all sizes and sectors in the economy. Inflation, lingering supply chain disruptions and labor shortages are keeping expectations dampened despite the middle market's improved outlook on revenue and earnings," said U.S. Chamber of Commerce Executive Vice President and Chief Policy Officer Neil Bradley. “While the Federal Reserve continues to address the demand side of the equation, Congress and the Biden administration need to focus on addressing the supply side. Getting people back to work, expanding legal immigration, increasing domestic energy production, lifting counterproductive tariffs, and increasing the housing supply are all critical for American families and businesses. Waiting longer to tackle these issues will only mean more uncertainty and less growth in the economy.”

One of the more encouraging aspects of this quarter’s results that demonstrates solid conditions in the middle market is the fact that 42% of respondents said they had increased capital expenditures and 51% expect to do so during next six months. Such investments will increase productivity and dampen inflationary pressures next year as that software, equipment and intellectual capital is put to work.

Inflation is the most significant factor shaping the near-term outlook as prices have grown faster than expected for longer than expected. An all-time high of 66% of survey participants reported passing along price increases downstream to clients in the past three months, and 75% said they expect to do so over the next six months.

Lingering supply chain issues and difficulties in finding labor have also contributed to mounting pricing pressures. Not surprisingly, 78% of respondents indicated they paid higher prices for inputs during the second quarter, while 74% expect to do so in the six months ahead.

Reaching another record high in the index’s history, nearly two-thirds (62%) of executives reported raising employee compensation in the past three months. Sixty-one percent of executives also said they expect to increase hiring during the next six months, while 47% reported doing so during the second quarter.

The service-concentrated middle market stands to gain from the accelerating shift in consumer spending from goods to services, as wages are the primary inflationary pressure within service-providing industries. Service-sector inflation through April increased 5.4% on a year-ago basis, significantly lower than the goods-producing sector that is experiencing a rate of inflation well above the 8.3% implied by the Consumer Price Index.

A set of special questions in this quarter’s MMBI explore how ongoing supply chain disruptions have affected the middle market and the marked differences between smaller middle market organizations and their larger middle market counterparts. Nearly half of the respondents said their organizations experienced significant negative effects due to unexpected changes or disruptions in supply from an upstream supplier during the previous 12 months.

A preview of the RSM US Middle Market Business Index Supply Chain Special Report is available here, and the full report will be available in July.

The survey data that informs this index reading was gathered between April 4 and April 25, 2022.

About the RSM US Middle Market Business Index
RSM US LLP and the U.S. Chamber of Commerce have partnered to present the RSM US Middle Market Business Index (MMBI). It is based on research of middle market firms conducted by Harris Poll, which began in the first quarter of 2015. The survey is conducted four times a year, in the first month of each quarter: January, April, July and October. The survey panel consists of approximately 1,500 middle market executives and is designed to accurately reflect conditions in the middle market.