Survey results show that despite business confidence being dampened by inflation and omicron, business conditions are strong across the middle market

Survey results show that despite business confidence being dampened by inflation and omicron, business conditions are strong across the middle market

CHICAGO  – (March 10, 2022) – The RSM US Middle Market Business Index (MMBI), presented by RSM US LLP (“RSM”) in partnership with the U.S. Chamber of Commerce, eased to 125.1 in the first quarter of this year from 130 in the previous quarter as the omicron variant and rising prices took a toll on overall economic activity as well as consumer and business confidence. The maximum impact of omicron was captured in this quarter’s index.

“Despite the decline in top-line sentiment, the current reading reflects strong business conditions across the middle market and is perhaps the first sign of relief inside the index on the risk to the outlook posed by inflation,” said Joe Brusuelas, RSM US LLP chief economist. “However, Russia’s invasion of Ukraine, which occurred following the sampling period for the first quarter of the year, will likely roil global supply chains and is causing the price of energy to rise in the near term. It is probable that this development and all that follows may damp middle market business sentiment during the second quarter of the year.” 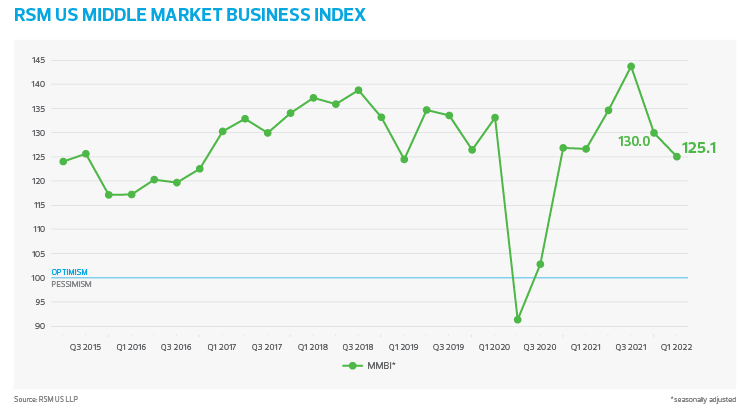 Optimistic Outlook Continues, Despite Current Impacts of Omicron and Inflation

Middle market executives’ views of the economy soured in the current quarter, with roughly 29% of survey respondents indicating the economy improved, 41% saying it deteriorated and 33% noting it was unchanged. Looking ahead, 43% of respondents said they expect the economy to improve and 29% anticipate it will worsen over the next six months.

Similarly, 43% of respondents reported an improvement in gross revenues and 40% noted improved net earnings for the current quarter. When asked to look ahead over the next six months, 61% stated they expect gross revenues to improve and 59% anticipate growth in net earnings. This decidedly optimistic outlook is underscored by the fact that both prices received and compensation eased in the current quarter, providing some relief to firms addressing a shortage of goods and labor.

While some indicators imply improving business conditions, pricing power in the middle market remains challenging given the hypercompetitive landscape across the real economy; an average of 54.5% of firms reported passing along price increases over the past year. Seventy-one percent of firms reported paying higher prices for goods in the current quarter and 67% of those expect to do so over the next six months. Additionally, roughly 53% of survey respondents reported passing along those higher prices in the current quarter and 69% said they would attempt to do so over the next 180 days.

“This quarter’s Middle Market Business Index continues to demonstrate that businesses and job creators remain heavily burdened by inflation, labor shortages, snarled supply chains and continued COVID-19 disruptions,” said Neil Bradley, Executive Vice President and Chief Policy Officer of the U.S. Chamber of Commerce. “For our economy to reach its potential, expanding the labor force and limiting inflation must be a top priority for policymakers throughout 2022.”

For the current quarter, only 38% of firms reported increasing hiring and 48% of firms indicated they increased compensation. Given that more than half of firms expect to increase outlays on productivity-enhancing equipment, 56% of firms report they will increase hiring and 62% will increase pay to attract labor to increase output. In the labor-intensive service industries that constitute the bulk of the middle market, wages play an outsize role in business costs.

Firms continued to manage inventory levels carefully given the latest round of shocks to the economy from supply chain challenges and worker absenteeism that have characterized the past two months. More than a third of firms (36%), reported an increase in inventories and 51% stated they expect an increase over the next two quarters.

Cyber Breaches Remain a Key Concern in the Middle Market
Responses to special questions in the latest MMBI survey show cybersecurity attacks and potential vulnerabilities remain a chief concern among middle market executives. While 22% of firms reported their company experienced a data breach in the last year, 72% of respondents said they believe unauthorized users will deliberately and illegally attempt to access their data or systems this year.

Scheduled for publication in June, the RSM US Middle Market Business Index Cybersecurity Special Report will detail cybersecurity trends that have emerged through seven years of MMBI data.

The survey data that informs this index reading was gathered between January 10 and January 31, 2022.

About the RSM US Middle Market Business Index
RSM US LLP and the U.S. Chamber of Commerce have partnered to present the RSM US Middle Market Business Index (MMBI). It is based on research of middle market firms conducted by Harris Poll, which began in the first quarter of 2015. The survey is conducted four times a year, in the first month of each quarter: January, April, July and October. The survey panel consists of 700 middle market executives and is designed to accurately reflect conditions in the middle market.