The federal government has allocated hundreds of billions of dollars over the past six months via the Coronavirus Aid, Relief, and Economic Security (CARES) Act’s Paycheck Protection Program (PPP) to bring financial relief to small businesses affected by the COVID-19 pandemic. Qualifying companies that met the Small Business Administration’s (SBA) requirements were eligible to apply for immediate funding to cover payroll costs, rent and utilities as well as interest on mortgages, with the understanding that the loan would be forgiven as long as the funds were utilized in accordance with the prescribed standards. Millions of small businesses across the country took advantage of the program, with the SBA approving the issuance of 5.2 million loans totaling $525 billion through August 2020.1

“Almost every crisis brings out not only those who seek to help others, but also exploit those who try to exploit the situation for their own unlawful purposes and financial gain.” – Acting Assistant Attorney General Brian Rabbitt, Sept. 10

However, the program’s prioritization of businesses’ immediate need for loan funding came at the cost of maintaining a sufficient level of diligence, oversight and monitoring. Consequently, reports of PPP fraud have populated the news cycle in recent months, with violations by bad actors ranging from the creation of fake companies applying for funding to the egregious spending of PPP-issued funds on a new Lamborghini. In a report issued by the Select Subcommittee on the Coronavirus Crisis on Sept. 1, members of the House of Representatives estimate that tens of thousands of loans totaling billions of dollars contain indicators of, at best, violations of PPP protocol, and at worst, outright fraud.2

Before delving into the different types of fraud potentially occurring through the PPP, it’s worth exploring basic fraud theory to illustrate the elements of PPP that may allow for fraudulent conduct. 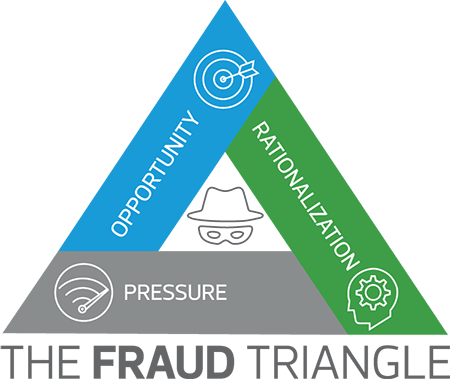 The Fraud Triangle, popularized by Donald Cressey in his seminal 1954 paper “Other People’s Money: A Study in the Social Psychology of Embezzlement,” highlights three key elements present when an individual abuses his/her position of trust to steal for his/her own benefit. The individual must (1) have the opportunity to violate the trust of a system or process; (2) perceive a pressure, whether internal or external, to abscond with the funds; and (3) be able to rationalize his/her bad conduct through his/her own mind’s eye. The elements of the Fraud Triangle can be viewed through the lens of the PPP program as follows:

Although the individual fact patterns of each alleged borrower fraud uncovered to date are certainly unique, there are general themes found in fraudsters’ conduct. The SBA rules stipulate that as long as your company 1) met the eligibility requirements of being a small business (generally, having less than 500 employees) and 2) could produce evidence of being in operation on Feb. 15, 2020, you were eligible to apply for a PPP loan.

Given these broad regulations and a lack of rigorous due diligence performed for each application, the most popular scheme fraudsters have perpetuated thus far has involved the creation of fake companies and falsification of supporting tax returns, payroll records, bank statements and financial statements to convince lenders that these requirements were met.

In August, for example, an Arkansas resident and Walmart employee pleaded guilty to bank fraud charges after setting up a fake entity just days before submitting a falsified application seeking $4.4 million to cover payroll costs for 247 employees.4 Others have opted to use recently defunct companies as cover. A Texas man was charged in June for allegedly submitting $3 million in PPP frauds using his wife’s wedding planning business, claiming to have 120 employees this spring even though the business closed in 2018.5 Other common infractions seen so far include inflating employee counts at legitimate businesses and lying about criminal history on the applications.

A potentially more concerning development is the recent identification of sophisticated fraud rings in which multiple fraudsters cooperate to defraud the PPP. The owner of a Florida talent management company, along with eight other defendants, were charged in August for allegedly organizing a kickback scheme in conjunction with over 90 loan applications seeking more than $24 million. The business owner utilized his connections with NFL players and other professional athletes to recruit eligible applicants in exchange for a share of the loan proceeds.6

As aforementioned, prioritizing the speed of PPP loan funding over rigorous oversight of applicants resulted in the obfuscation of the lenders’ responsibilities when it came to the level of due diligence performed on the applicants. Specifically, the SBA made it clear that lenders “may rely on borrower representations” and would not be on the hook to “independently verify the borrower’s reported information if the borrower submits documentation supporting its request for loan forgiveness and attests that it accurately verified the payments for eligible costs."7 It appears that the PPP created a vacuum of responsibility regarding the possibility for fraudulent applications and thus lacked a plan for investigating and prosecuting those abusing the program.

However, PPP enforcement may be manifest internally or through the courts, versus through Congress. Shortly after the PPP was rolled out, Wells Fargo was accused of prioritizing larger loan amounts to maximize processing fees despite the SBA’s mandate that loans should be processed on a first-come, first-serve basis. Disgruntled investors are now pursuing litigation against Wells Fargo, claiming that the bank’s lack of controls surrounding PPP and the resulting misallocation of PPP funds has resulted in published lawsuits and regulatory probes that have driven down the stock price.[1] (note that prior to the publication of this article, the Wall Street Journal reported that Wells Fargo fired as many as 125 employees for conduct related to pandemic loan programs[2])

JPMorgan, meanwhile, announced a probe of its own in September after it found evidence of employee wrongdoing in the PPP process. Given the lack of oversight required, a strong inherent risk of collusion exists among lender employees who can turn a blind eye and assist in the circumvention of the approval requirements in exchange for kickbacks from borrowers.

As of September 10, 57 individuals have been charged with attempting to steal a combined $175 million of PPP funds, with an additional 500 individuals identified as potential suspects in an organized PPP fraud ring.[3] And this is just the tip of the iceberg: The majority of the cases identified to date have represented clear violations of SBA policy or blatantly falsified documentation.

With the loan forgiveness period ending on December 31, 2020, the DOJ’s attention is likely to shift from identifying fraudulent applications to scrutinizing where taxpayer dollars were improperly spent once received. If one thing is certain, it’s that there will be a steady stream of PPP violations in the news for the foreseeable future.

Much is still developing regarding the use, audit and potential actions to be taken under PPP. Although businesses may feel comfortable waiting to see how government scrutiny evolves around the program, it may be wise to consider preparing for the scrutiny now, while documents are at hand and while understanding is still fresh. A defensible position regarding application, use and tracking of PPP funds can only benefit a business that takes these measures going forward.

Be proactive: A guide to internal and external fraud investigations

Learn how to identify early signs of fraud and apply best practices in an internal investigation to reduce the financial impact of fraud.