On Aug. 25, 2022, the Securities and Exchange Commission adopted amendments to its rules to require registrants to disclose information reflecting the relationship between executive compensation actually paid by a registrant and the registrant’s financial performance. The rules implement a requirement mandated by the Dodd-Frank Act.

When is this effective?

The new rules will apply to any proxy and information statement where shareholders are voting on directors or executive compensation that is filed in respect of a fiscal year ending on or after Dec. 16, 2022. Most registrants that are subject to the new rules will be required to include the new disclosure in their 2023 proxy statements.

What is required to be disclosed?

There are three new elements of disclosure:

1. Prescribed tabular disclosure: Tabular disclosure of total compensation for the PEO and the average for the other NEOs for the five most recently completed fiscal years. 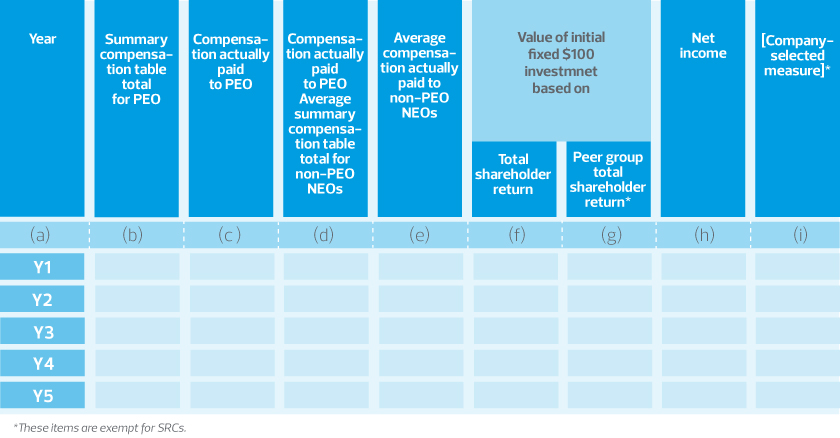 The SEC included specific instructions for each of the columns in this table. Special attention should be paid to columns (c) and (e). These columns require adjustments which will require year-end fair-value calculations using the same method the company uses for share-based payments reflected in the U.S. GAAP financial statements. Additionally, column (c) requires fair value as of the vesting date. For more on this, see valuation considerations below.

2. Comparative disclosure: Disclosure describing the relationships between the executive compensation actually paid to the PEO and the average executive compensation actually paid to the other NEOs and the financial performance measures, as disclosed in the table. The discussion must also include a comparison of the total shareholder return (TSR) of the company to the peer group TSR.

As noted above, the new rules require adjustments to calculate compensation actually paid to PEOs and NEOs. In the first year of disclosure in the proxy, the associated valuation requirements to be compliant could be significant and complex. Issuers are required to perform three years of historical valuations at the beginning and end of each period, effectively four years of valuations, and calculate new fair values that are not required under U.S. GAAP. Equity awards may include service, performance and/or market conditions. These valuations may require sophisticated modeling that can account for specific features of the awards.

For issuers that have varying vesting terms and off-cycle grants, the number of computations and required valuations can be substantial. An important distinction is vested-versus-unvested options, and when the vesting occurred. The guidance mandates that in addition to annual reporting requirements, the date and fair value at vesting need to be disclosed and valued. For example, issuers with quarterly or monthly vesting would require a valuation at each vesting date, increasing the number of required valuations from four to 12. Furthermore, unvested awards issued in prior periods will require a valuation in order to report the change in fair value over the prior period.

Even for “plain vanilla” options, there may be additionally complex considerations that need to be considered for previously granted options.

The rules also require footnote disclosure of any valuation assumptions that materially differ from those disclosed at the time of grant on both the annual and vesting dates.

Solutions to help address your valuation and technical accounting needs

Swipe to view all