In late 2018, the U.S. Treasury and the Internal Revenue Service released proposed regulations regarding the Base Erosion and Anti-Abuse Tax (BEAT) introduced in the Tax Cuts and Jobs Act of 2017 (TCJA). The proposed regulations of the BEAT, like many of the provisions of the TCJA, seek to curb perceived tax base erosion among U.S. multinationals and prevent taxpayers from shifting profit outside the U.S. through excessive or abusive deductible payments to foreign affiliates.

Specifically, with the BEAT, U.S. corporate taxpayers with three year average annual gross receipts of at least $500 million U.S. dollars and calculated base erosion percentages of 3% or more (2% when a bank or registered securities dealer is part of the taxpayer’s affiliated group) must pay an additional 10% minimum tax (increasing to 12.5% in 2025) on qualified payments to their affiliates outside the United States. While the proposed regulations (Treasury regulations section 1.59A et seq.), are complex, they contain several taxpayer friendly provisions. Among them is an exemption from inclusion in the base eroding payment calculation for intercompany payments made consistent with the services cost method (SCM).

The SCM was introduced in U.S. transfer pricing regulations (Treasury regulations section 1.482 et. seq.) and allows U.S. taxpayers to charge intercompany services meeting certain defined criteria at cost and still be considered consistent with the arm’s length standard. To apply the SCM consistent with U.S. transfer pricing regulations, adequate books and records of the services must be maintained and three other defined criteria must be met:

Services meeting the first criterion (such as those identified in the IRS revenue procedure 07-13) are colloquially known as ‘White List’ services and generally include process oriented activities such as information technology services, human resource services, and legal services. Services meeting the second criterion (such as those listed in the transfer pricing regulations themselves) are colloquially known as ‘Black List’ services and generally include transformative activities such as production services, selling services, and research services. Outside the White List and Black List, however, a gray area exists to which business judgment (the third criterion) must be applied to determine if the transfer pricing SCM is appropriate.

The BEAT benefit to a qualifying taxpayer is clear: If a taxpayer has intercompany services which are charged at cost consistent with the services cost method, the taxpayer does not have to include those services in its BEAT calculation, and avoids the 10% minimum tax associated with the BEAT.

This nuance of the BEAT SCM removes the gray area of the transfer pricing SCM, essentially implying that so long as an intercompany service is not on a Black List, it is both eligible for application of the BEAT SCM and exempt from the minimum 10% BEAT tax. This is good news for some U.S. taxpayers.

Under application of the BEAT SCM however, the gray area is removed and the payment escapes BEAT altogether.

The markup to the $100 million intercompany payment need not apply, and there is no subsequent BEAT tax payment, resulting in $1.2 million in theoretical tax savings. 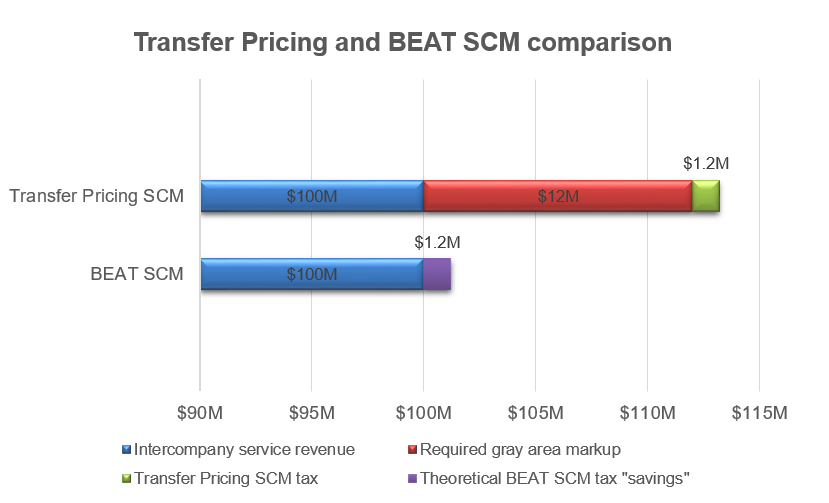 The introduction of the services cost method concept to the BEAT is a welcome benefit to some taxpayers. The application of the BEAT SCM is an even greater benefit to others. Taxpayers should continue to monitor their fact patterns to ensure they are planning appropriately.