How lumber tells the story of homebuilding during the pandemic

As rising interest rates increase the cost of owning a home, it appears that we have reached peak market demand and that prices will soon begin to ebb.

The slowing of demand should give builders a chance to deal with some of the supply chain and labor issues they have faced.

A slowing of construction will, in turn, result in a decline in lumber prices, bringing them back in line with long-term averages.

The increase has been blamed for the rising price of new homes, with the National Association of Home Builders noting in April 2021 that the increase in lumber prices alone was responsible for adding as much as $36,000 to the average price of a new home.

But that prompts a question: With lumber prices declining, why hasn’t the cost of a newly built home declined as well? Part of the answer lies in the economies of scale at which large developers operate, helping them endure the ebbs and flows of the market. It’s a different story for smaller builders, though, which have been more vulnerable to the swings in input costs like lumber.

To understand this dynamic, consider what happens with a piece of lumber as it goes from the forest to a construction site, and how the biggest builders reap the biggest rewards.

The journey for lumber begins anytime from 25 to 50 years before the tree is harvested. A tree is planted in one of the approximately 200 million acres (about the area of Texas) of commercial forested timberlands in the United States. Most of this land is owned by private individuals or corporations, but three primary, publicly traded real estate investment trusts control 10% of the timberland.

As lumber prices rose throughout the pandemic, margin prices among the investment trusts soared, with average gross margins hitting close to 48% in June 2021, double the pre-pandemic three-year average of 24%. 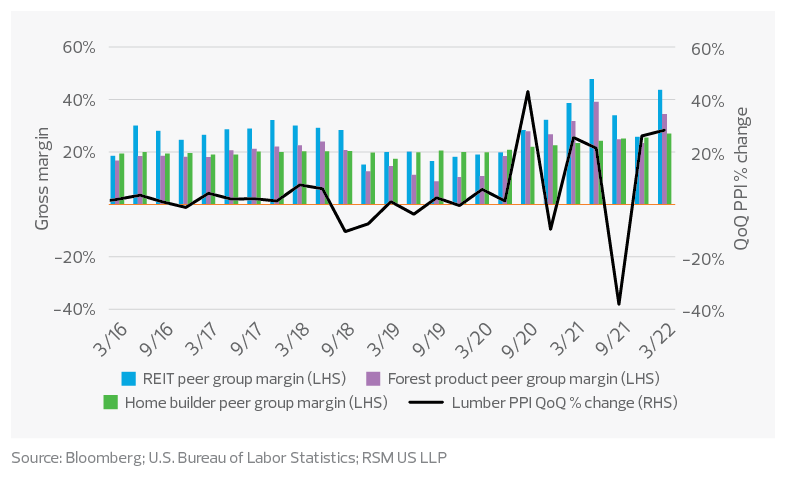 The increase in margin reflects the industry’s supply challenges. Aside from the United States, a major source of timber is British Columbia. In the early 2000s, British Columbia was devastated by a pine beetle infestation. The response was to salvage as much lumber as possible. This drove up supply right before the financial crisis. The combination of muted demand and high supply forced many Canadian loggers out of business, reducing competition.

Smaller and midsize timber companies, by contrast, have struggled. Loggers do not have a large marketplace in which to sell their lumber to different sawmills or timber buyers. Instead, loggers harvest lumber for a specific mill or timber buyer on a contract basis.

Sometimes these buyers will place quotas on the loggers, limiting them to bringing a certain tonnage of lumber to sell at the mill for a designated period. These quota systems serve as a means of limiting excess harvesting and guarantee prices to these sellers.

But the quotas are often not set in stone, changing on a weekly or even daily basis. With the shortage of truck drivers, these loggers are feeling a pinch because they are limited in what they can sell to each sawmill and there are not enough drivers to deliver their logs to sawmills outside of the local areas, which is limiting production.

Once the timber is harvested, it is sent to the sawmill, where the lumber is cut. Early in the pandemic, sawmills cut back on production because of the health crisis itself and also because producers thought that demand for lumber would plunge, as it did during the financial crisis in 2008.

This prediction proved to be inaccurate, though, as demand surged. At the pandemic onset, this left many sawmills underproducing usable lumber. However, by the fall of 2020, many of the publicly traded forest companies were back up and running, humming with orders, which helped enable them to expand their margins from a pre-pandemic five-year average of 17% up to 48% by the second quarter of 2021 (based on a select peer group of American and Canadian forest product companies). 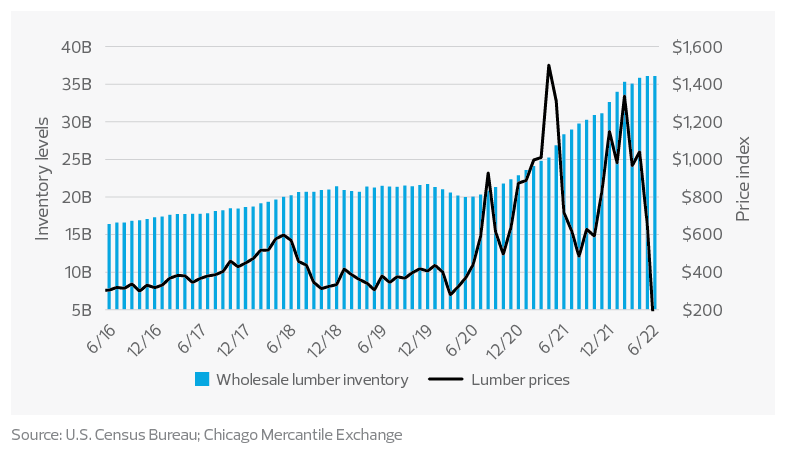 By the summer of 2021, inventory levels began to improve across the resellers, driving down lumber pricing and margins for forest product companies, with gross margins of the average peer group dropping to 26%. The declines were short-lived, though, as speculation began to enter the market, because of the large focus placed on homebuilding throughout the pandemic. Now, we are again seeing a drop-off in lumber prices.

With the Federal Reserve raising interest rates to tame inflation, demand for building products will continue to ease to more normalized levels.

These factors should bring lumber prices back in line with long-term price trajectories set before the pandemic and serve to tighten up margins back to pre-pandemic levels.

Housing has been one of the largest of the inflationary pressures in the economy, rising by 21.2% year over year as of April, according to the S&P CoreLogic Case-Shiller National Price Index.

Builders have benefited on both the supply and demand fronts. On a supply front, the United States has underbuilt homes since 2007, because many builders did not want to get caught with excess inventory the way they did after the Great Recession. This underbuilding—the nation is about 5 million homes short of what it needs—coupled with the emergence of millennials as a buying force, has led to a steep decline in inventory levels.

This shortage was further worsened by significant growth in demand, pushed by the Fed’s lowering of interest rates in 2020 to combat the pandemic and by the widespread desire for more home space to live and work. 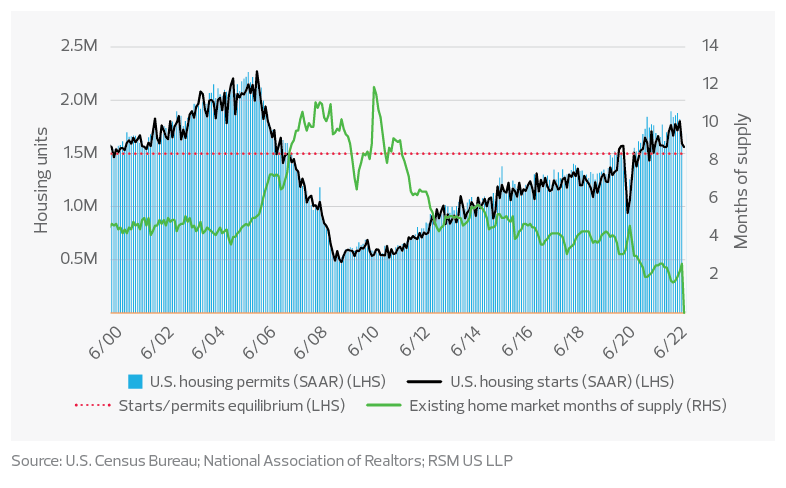 Now, with the Federal Reserve raising interest rates, builders will need to approach the next year with caution. The existing-homes market, which is about 10 times larger than the market for new homes, is heavily undersupplied, with inventory levels, measured by months of supply, at 2.6 months as of May. The new-home market, however, is at 7.7 months. Equilibrium for these markets is typically between four and six months.

Large, publicly traded homebuilders have been trying to pace production to limit exposure to oversaturation. But with rising interest rates, homeowners are facing decreased affordability. This will slow demand for housing to more normal levels.

On top of declining demand, supply challenges from the rising cost of materials and labor will most likely squeeze profit margins for homebuilders and push margins back to pre-pandemic levels. But that has yet to happen.

Based on a peer group analysis of publicly traded homebuilder margins, gross margins in the first quarter grew to 27%, up from pre-pandemic levels of 20%. While we do not expect a recurrence of 2007—a crash in the housing market—there are certainly headwinds that homebuilders need to continually watch to ensure they protect their margins and remain profitable.

As rising interest rates increase the cost of owning a home, it appears that we have reached peak market demand and that prices will soon begin to ebb.

The slowing of demand should give builders a chance to deal with some of the supply chain and labor issues they have faced. A slowing of construction will, in turn, result in a decline in lumber prices, bringing them back in line with long-term averages.

While the shifting tides will lead to lower margins throughout the supply chain, opportunities are still plentiful. Builders may just have to work a little harder to find them.

Get updates and insights on issues ranging from accounting standards to shifting tax concerns to operational improvements critical to construction professionals.