U.S. households are drawing down savings as the economy booms

After building up prodigious savings during the pandemic, American households are starting to spend that cash, our analysis of consumer savings and checking deposit data shows.

This drawdown is an encouraging sign that households, buoyed by ample employment opportunities and rising incomes, feel confident enough to spend some of those savings.

And it’s another sign that consumers are returning to more normalized spending and saving patterns, which should continue to boost overall economic activity even as risks around inflation and the omicron variant loom.

This reduction in savings will no doubt affect families’ decisions about work and spending. And when the fading fiscal support is added in, the demand that is playing a role in the current surge in inflation will ease during 2022. 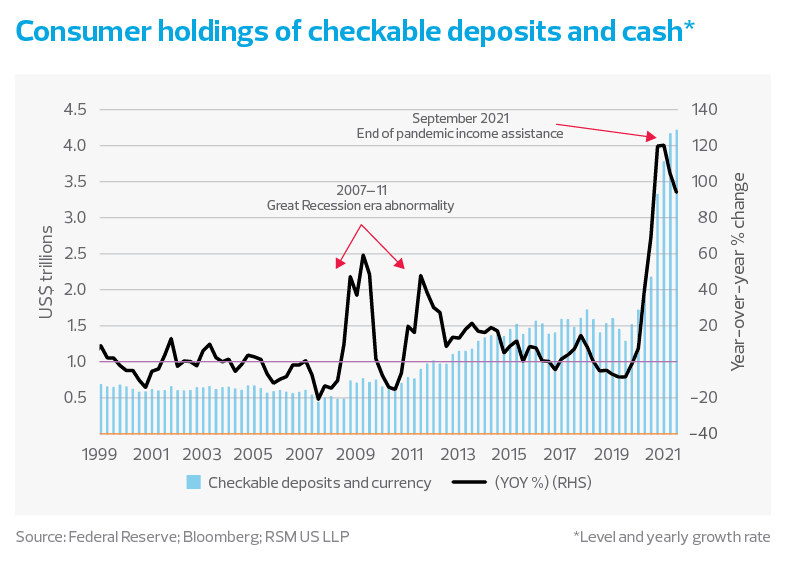 Throughout the ups and downs of the pandemic, household savings have provided a vital cushion to the economy and American households. After peaking in the middle of 2021, the savings stashed away during the pandemic provided a bridge through the slowdown in the third quarter and are now helping fuel a growth rate that will exceed 7% to close out the year.

But questions remain regarding the expiration of the pandemic assistance programs. Will their positive impact on overall economic growth continue, and will increases in the cost of food, energy and rent eat into those gains?

The pandemic, after all, continues to affect workers in certain areas of the economy more than others. 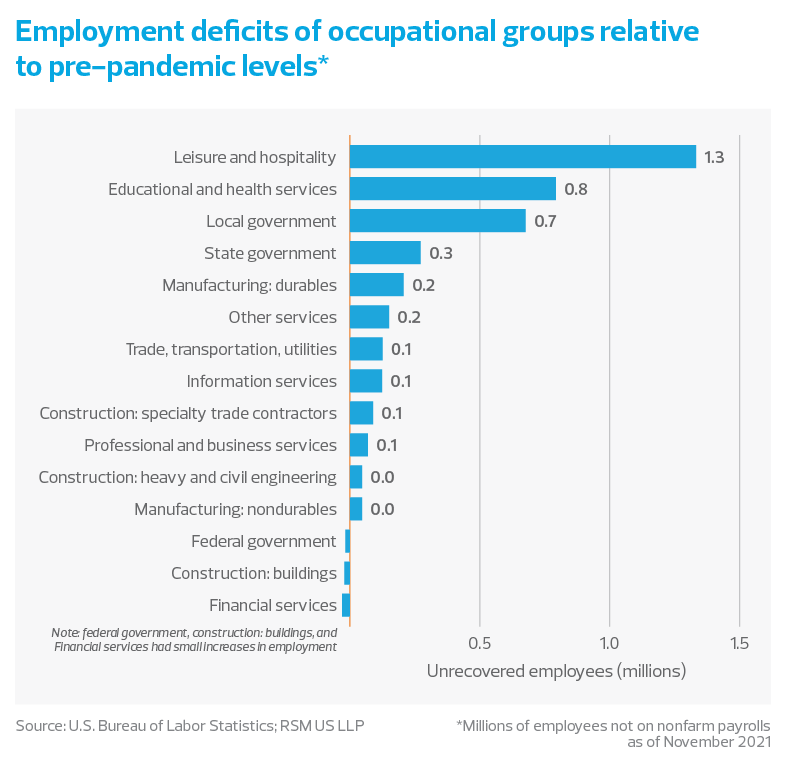 For the economy in general, the discussion on getting people back into the workforce centers on low-wage employees, ranging from teachers to hotel staff to senior-care workers. Will those workers of more limited means be more likely to return to work as cash savings dwindle?

Cash and savings among those out of work

The argument has been that those workers will not return to jobs until the spigot of government largesse is turned off and household balance sheets are depleted.

If anything, funds in checking accounts and savings accounts plateaued before the pandemic benefits expired.

We attribute this surge in deposits to the need for precautionary savings. Households held onto cash and savings out of fear that the economy would worsen during the pandemic. 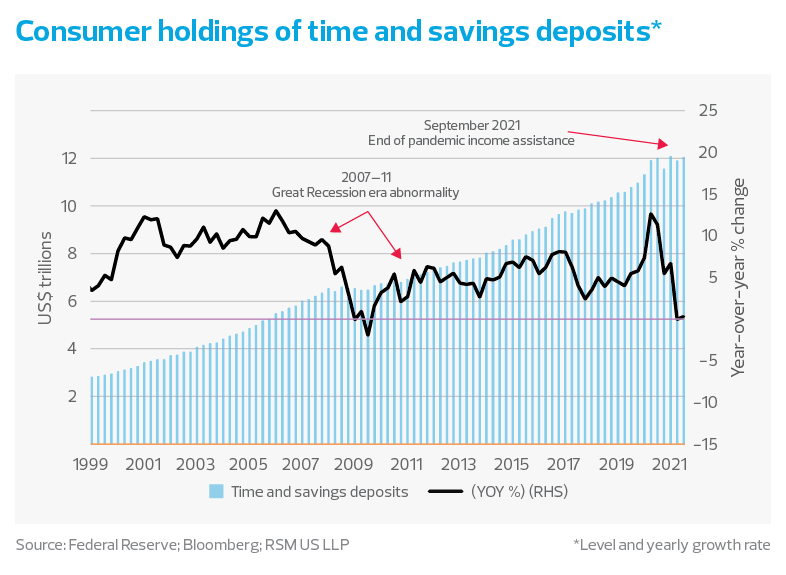 This is not the first time this has happened. Checking deposits surged during the shock of the 2008-09 financial crisis and then again in 2011.

The savings rate, though, was another story. During the 2008-09 recession, savings dropped, most likely as households dipped into their reserves to maintain spending.
But in 2020, savings jumped as government support boosted household balance sheets. Savings has remained at that higher level, not only because of the threat of the pandemic but also because of the limitation of spending opportunities during the pandemic.

In a study conducted by the Institute at JPMorgan Chase in September 2021, researchers found that checking account balances in the lowest quartile of households—those earning $12,000 to $30,000—were 70% higher than two years earlier but were still holding an insufficient cash buffer of only $1,000.

It makes mathematical sense for low-income households to have the largest percentage change in their cash balances because of pandemic assistance, and for their checkable holdings to be depleted more quickly as reported in the JPMorgan report.

Conversely, the percentage increases for higher-income households during the pandemic were not as large, but their rates of depletion were slower.

In our estimation, that accounts for the persistence of savings still to be spent by higher-income households. It also implies that there is policy space to address the needs of low-income workers who are still dealing with the economic fallout from the pandemic.

And it also makes sense that lower-income households would apply government benefits for essential expenses. That was borne out of surveys by the Census Bureau in the weeks immediately following the receipt of the first monthly child tax credit payments in the summer of 2021, and then repeated during the fall when the children were back in school.

An overwhelming majority of those who received child tax credits applied those funds to food, clothing and school supplies. Smaller percentages of households allocated a portion of their benefits to rent, child care, vehicle payments and debt repayments.

And as would be expected, 85% of those responding to the survey were 25 to 55 years old, in their prime working age. 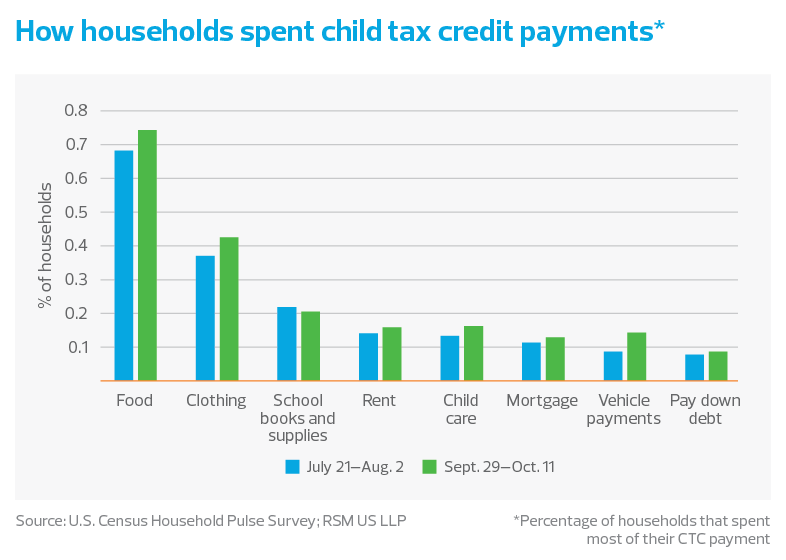 The drop in checking and savings deposits is telling a different story for different income groups.

It’s not realistic to think that parents of children not yet in school will risk their children’s health and suddenly return to work. For as long as the pandemic persists and until a vaccine is formulated for infants, someone in those families will remain at home. And for as long as schools are threatened by frequent COVID-19 outbreaks and closures, at least one parent will remain out of the labor force.

And it’s incorrect to think that the working class is sitting on top of a pile of savings. Yes, their savings rate has increased, but it is now being drawn down. The data shows that whatever money that was given to low-income families was and is being spent on food and clothing and school supplies.

Policymakers are keenly aware that the end of pandemic assistance will become a drag on consumption. This is why one area of the policy debate of the Build Back Better legislation revolves around making the enhanced child tax credit permanent.

Whether that assistance comes in the form of food stamps or rent assistance, or in direct payments through the monthly child tax credit, a strong economic argument can be made. Government transfers that augment the income of low-income households are spent on essential goods and services, with downstream multiplier effects that benefit every strata of incomes.