The Fed’s mandate for price stability

The first two articles in this issue of The Real Economy explore the Federal Reserve's dilemma of taming inflation while maintaining full employment. They are from a series examining the overriding monetary and fiscal policy challenges in today's economy. Read part 2 here.

In the year ahead, the economy and financial markets will be influenced by how the Federal Reserve strikes a balance between its dual mandates of full employment and price stability.

With inflation at its highest point in decades, we think the central bank will move to normalize its monetary policy by first winding down its asset purchases and then raising interest rates—all without undermining the recovery.

The extent to which the Fed manages to bring down inflation and strike that balance will largely determine the lifespan of its flexible average inflation targeting policy or set the stage for an opportunistic increase in the 2% target to 3% in the coming years.

As the normalization in rates takes place this year, we do not expect steep increases like those that took place under Paul Volcker, even if inflation proves stubborn this year and next.

This is why the market has priced in three rate hikes this year, with a 90% possibility of a fourth. But even that may end up fewer given the likely appointment of three Fed members who are almost certain to lean toward the full employment side of the Fed’s dual mandate.

Traditionally, fiscal and monetary authorities have moved to counter inflationary pressures through aggressive tax, monetary and regulatory policies. That means tax and interest rate increases, as well as policies that result in a better allocation of capital that discourages bubbles, whether they are in housing or financial markets.

Given the use of the Fed’s balance sheet as a policy tool over the past two decades, it is likely that the central bank will choose to permit a runoff of its balance sheet this year.

Between 2017 and 2019, the Fed let its balance sheet fall by roughly $50 billion per month. In our estimation, Fed officials will most likely allow that to reach $100 billion once it begins, which will probably happen after the Federal Open Market Committee policy decision in September.

Tax hikes, though, seem unlikely for now, and changing incentives around housing and financial investment will take time to work.

It all puts more pressure on the Fed to counter inflation by raising interest rates and by reining in speculative investment through public persuasion, known as open-mouth operations.

With inflation surging, there have already been calls for emergency price controls used to combat shortages during World War II and then again, in response to the OPEC oil embargoes in the 1970s.

While for some, selective price controls would be preferable to Fed rate hikes that have the potential of derailing the recovery, we would disagree.

The imposition of price controls under current conditions would be a grave error that would only provide an illusion of short-term stabilization. The more likely outcome of price controls would be medium-term distortions and longer-term dislocation across the economy. 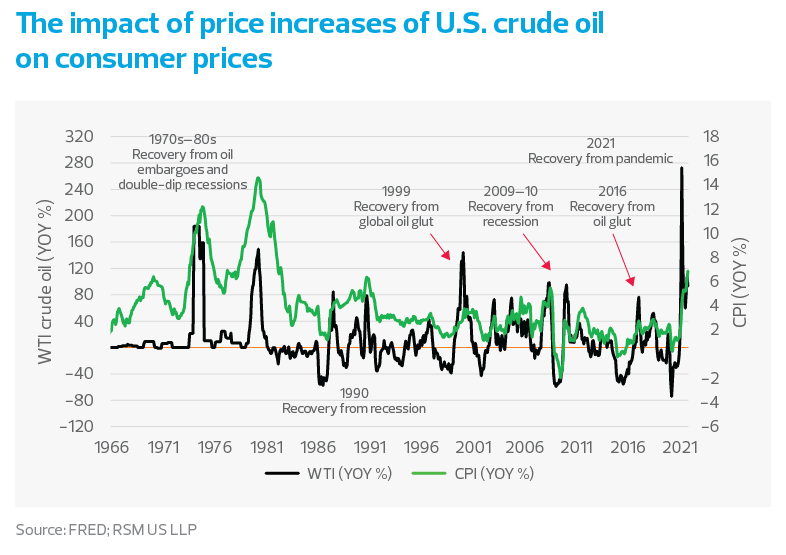 Inflation last year was a result of a series of policy-induced shocks that followed the pandemic:

Energy price increases accounted for more than 36% of the 6.9% total yearly increase in consumer prices last year through November, with food prices taking a 12% share.

The increase in the cost of shelter is the one sector directly attributable to the health crisis and Fed policy. Because of the pandemic, there was an extraordinary increase in the demand for more living space, particularly for families with children fleeing cities for the suburbs.

Because of Fed policies–a zero nominal interest rate and purchases of mortgage-backed securities–mortgage rates that were already low fell even further. That decline allowed for the housing stock, which had been in short supply since the financial crisis, to be bid up.

This presents a dilemma for the Fed. What is the trade-off between the need for new housing and the need to raise interest rates from close to zero?

The largest increases in inflation have occurred during periods of sharp rises in the price of oil. (These spikes coincided with rising demand after economic slowdowns while some were the result of exogenous forces.)

It follows that in an economy that has relied on fossil fuels, an increase in the price of crude would show up in the prices of most other goods and services.

But the relationship between oil and inflation has changed. It was far stronger before 2000 than over the past 20 years. As the economy diversifies away from an overreliance on fossil fuels, that relationship should continue to fade and inflationary pressures ebb over the medium to long term.

That being said, the Fed cannot be expected to solve a public health crisis or to influence the response of OPEC to an oil shortage.

But the Fed can facilitate investment through interest rate policies to mitigate those problems. That is why even as the nominal policy rate rises, real interest rates will remain negative in the near term and are what can be called accommodative even as the economy cools this year.

For those reasons, we anticipate an acknowledgment of the problems caused by inflation and a measured response by the Fed that will not tip the economy into recession.

Expectations for the economy

Despite increases in the cost of housing, food and energy, we doubt that the Fed intends to suddenly change course and embark on an inflation-squashing program of steep interest rate increases. Instead, there are many reasons to expect the members of the Federal Open Market Committee to talk like hawks and walk like doves, at least for the time being. Why will that condition likely prevail?

First is the decline in long-term growth. It’s debatable if in the medium term the underlying economy could support normal rates of inflation and interest rates once the pandemic shortages are sorted out.

Recall that real gross domestic product growth has been in decline for decades, slipping from a five-year average rate of 4% per year in the 1970s to less than 2% by late 2019, just before the pandemic. During this deceleration, the economy flirted with deflation and substandard inflation rates of less than 1.5% per year.

The paucity of growth removes the likelihood of long-term inflation pressures from unconstrained demand or rising wages. Inflation last year can be traced to production shortages and logistic shortfalls that will eventually be rectified. And there is little likelihood of wage increases for low-wage employees continuing for a long time.

These low estimates for growth most likely stem from uncertainty. In the short term, there is no clear answer regarding damages to the labor force, the long-term health consequences of COVID-19 or the ability to bridge the ideological resistance to vaccinations.

In the long term, the economy will not necessarily remain competitive without public investment. We would attribute the low expectations for inflation to diminished demand and confidence in the Fed’s ability to squash inflation if needed. 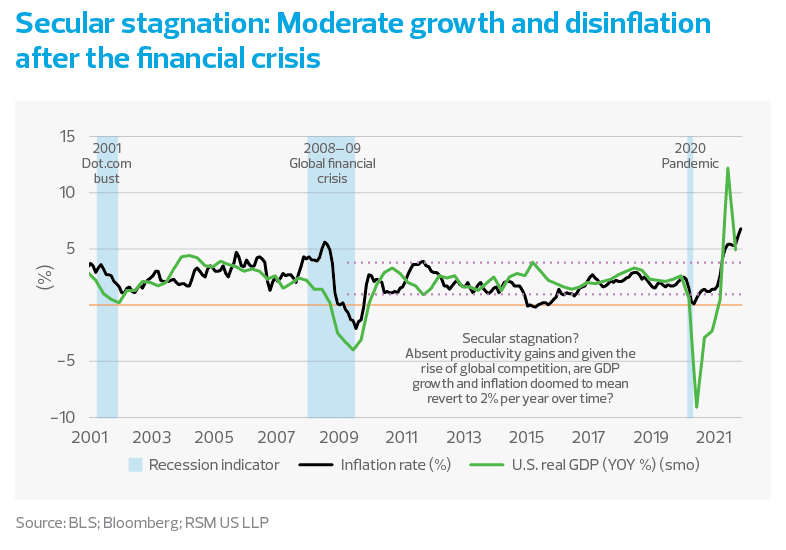 Second, the real long-term neutral rate of interest, or R*—which is the interest rate that supports the economy at maximum output while keeping inflation constant—is approximately 0.5% in our estimation. That low level is a result of a reduced risk appetite, demographic changes and lack of attractive investments, all of which lead to lower real returns.

The Fed cannot increase the nominal policy rate too much above 2.5% without creating conditions for a recession. To do otherwise would create longer recessions and slower recoveries.

Third is the expectation of an increase in productivity. Because of the onset of the work-at-home economy and a strong increase in capital expenditures, we expect that productivity per hour will improve noticeably during this business cycle. In addition, the infrastructure legislation over the medium term will lift productivity and dampen inflationary pressures.

Still, it will take some time for the infrastructure boost to become a factor, and although corporations are planning capital investments—most likely because of the difficulty in staffing—the economy is relying on a labor force that is eager to move on to other endeavors, is unqualified for the requirements of advanced manufacturing or is hampered by family requirements.

Fourth are subdued expectations of inflation. To the extent that inflation is a self-fulfilling prophecy, we doubt that consumers would suddenly change their spending behavior to cause an extended and sustained increase in the demand for products.

Given that the fiscal boost is fading, the holiday crush of shopping is now over, and with infections surging again, it’s more likely that consumers will remain close to home over the winter.

The Philadelphia Fed’s ATSIX model of inflation expectations anticipates an inflation rate of 2.5% next year, and that will drift lower to 2.1% in 10 years. This coincides with the market expectations of 1.8% inflation in 10 years based on forward rates of five-year Treasury yields five years from now. 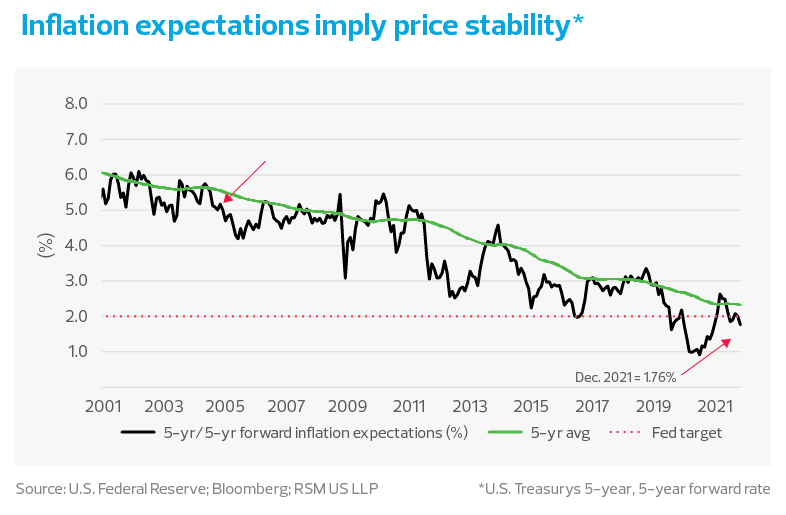 Fifth, price stability does not mean zero inflation, despite assertions otherwise. Monetary authorities in developed economies, including the Fed, began targeting a 2% inflation rate in recent decades. But like the assumed Fed target of a 5% unemployment rate, the 2% target for inflation might be out of date as well.

In fact, the Fed has been explicitly looking for inflation to be higher than 2% in the short term to balance out the long period of disinflation and to move beyond the several dangerous bouts of deflation during the past decade. This is one part of the Fed’s flexible inflation targeting policy.

And though the Fed’s projection for the core personal consumption expenditures index remains 2.0% over the long term, a recent paper by a former Fed research director finds that raising the target rate to 3% would be in the best interest of job creation and equality of opportunity, and would also allow the Fed more room to fight recessions.

The authors cite criticism of raising the proposed inflation target, including unanchored inflation expectations. Still, there are examples that this could be achieved through explicit guidance. Examples are the Bank of Canada’s 1% to 3% range around its target of 2%, which allows for more policy leeway, and the recent Fed guidance that it would accept higher temporary inflation rates.

Should inflation remain stubborn and not return to the 2% target in the near term, then an opportunistic resetting of the inflation target to 3% may be in the cards.